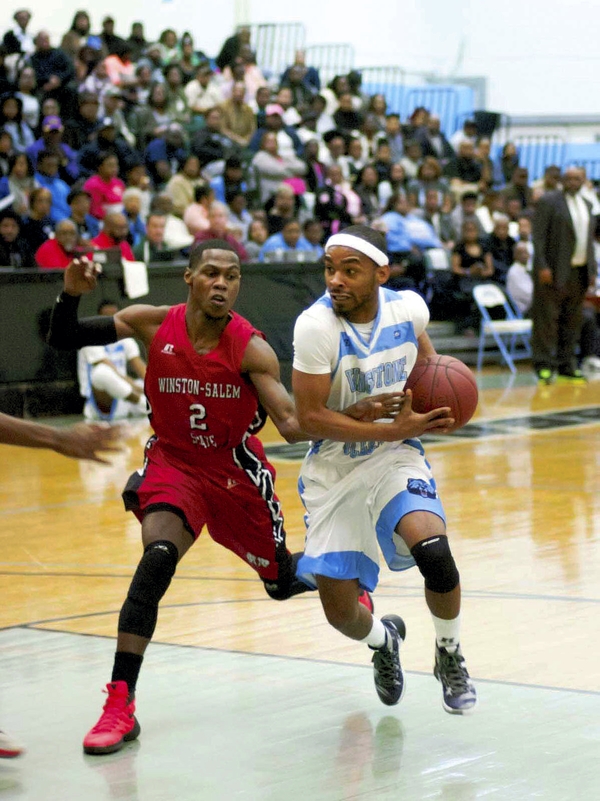 SALISBURY — The Livingstone men’s basketball season hasn’t come to a complete stop, but the Blue Bears were caught tapping the brakes on Saturday.

Their 81-79 overtime loss to Winston-Salem State was their fourth straight setback and eighth in nine games. And while the Blue Bears of old would have put this one away when they had the chance, the two-time defending CIAA champs surrendered the game’s last five points and came up short.

“You rely on your upperclassmen to finish games. That’s something we haven’t been able to do,” coach James Stinson said at Trent Gym, where Livingstone (8-14, 3-7) lost for the 10th time by eight or fewer points. “We’re putting the ball in our playmakers’ hands. It’s just a matter of finishing those plays.”

It was a confounding loss, one that saw WSSU (10-11, 4-6) jump to a 10-point lead in the first half. Livingstone never led in regulation and spent most of the game swimming against the current.

“I felt like this game wasn’t as close as it looked,” Winston-Salem forward T.J. Wilson said after the Rams won in Salisbury for the first time since 2012. “We missed free throws. We turned the ball over. We missed tip-ins. But rivalry games are like that. Sometimes you become complacent and allow teams to stay in the game.”

Livingstone trailed, 71-67, with 20 seconds to play in the second half when it staged a pulsating rally. Jimmy Wilson hit the first of two free throws for the Blue Bears with 9.6 seconds to go, then back-rimmed the second. The ball corkscrewed to teammate Ty Newman, who sank a layup with eight seconds left to make it 71-70.

“That was just timing the rebound,” Newman said after scoring a team-high 19 points. “I knew I had to get to it and put it right back up.”

It was Newman who forced overtime when he took a pass from Eric Dubose (18 points, 5 assists, 5 steals), drove the left baseline and hit a doorstep layup with eight-tenths of a second on the clock, tying the score at 72-72. “Big-time players make big-time plays,” said teammate Nasir Austin (12 points, 13 rebounds).

Wilson, one of four Rams’ scorers in double figures, called it a “lack of awareness,” and added: “We let the ball go straight up the sideline and all the way to the hoop. (Newman) is good enough to beat you if you let those things happen.”

Livingstone took its first lead early in overtime when Dubose fed Daryl Trynham for a runaway layup. The Blue Bears later went up, 79-76, when Austin corralled his own missed layup, hit a put-back and was fouled by WSSU senior Rayvon Harris. He completed a three-point play with 1:49 remaining, but the Blue Bears never scored again.

Instead, WSSU motored across the finish line. First came a left-side runner by C.J. Ford with 51 seconds to go. Then Wilson put the visitors ahead, 80-79, on a fast-break layup 30 seconds later. Finally, Jamel McAllister closed the scoring with a free throw with 1.3 seconds remaining.

“We’ve just got to keep working,” said Dubose. “There’s nothing else we can do. Games like this don’t really wear on you, but they make you anxious.”

Austin said the mood in LC’s locker room remained upbeat despite another narrow defeat. “It’s annoying,” he said. “At the same time, we know we’re a good team. It’s not like teams are blowing us out. But tournament time is just around the corner, so the sense of urgency is up.”

“It’s my responsibility,” he indicated, “to make them understand that completing games and executing plays at the end of games is a by-product of what we do in practice. You have to take it from practice to the games. And if we don’t start soon, we’ll be at home in Salisbury.”

NOTES: WSSU has won three straight and four of its last five. The Rams shot 62 percent (31-for-50) from the field. … Livingstone made only one of 14 three-point attempts. But the Blue Bears won the rebounding battle, 41-31, and forced 23 turnovers. … This was LC’s third overtime game and first OT loss.