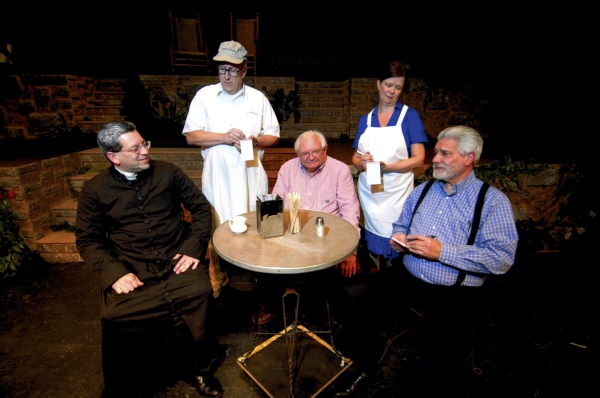 ‘Welcome to Mitford’ asks us to listen to our hearts

“Welcome to Mitford” is the kinder, gentler play, with likable characters and lesser crises. It’s uplifting and full of faith. Piedmont Players’ production, with its evocative set and comfortable cast, is an enjoyable evening that requires letting loose the heart.

The play, written by Robert Inman, the North Carolina novelist, screenwriter and playwright, is contemplative. It’s based on Jan Karon’s popular Mitford book series, and covers a lot of ground.

Brien Lewis, president of Catawba College, plays the thoughtful, caring Episcopal priest, Father Tim Kavanagh. Mitford may be a small town in the mountains, but Father Tim’s flock is busy and demanding and he deeply feels the need to get things right. Davis is quiet, patient and steady. There are moments when it would be nice to see more emotion, but he’s the constant throughout the play.

Owen Teague steals the show as young Dooley Barlow, abandoned by his mother, taken in by his grandfather, and subsequently in search of a home.

Teague, who plays Dooley at all ages, is charming. He plays the undisciplined boy that Father Tim vows to tame, he plays the troubled young teen deeply hurt by his family’s breakup, and the mature college student who is finally succeeding. He got well-deserved cheers and whistles on opening night.

Kathleen Tronsor plays Cynthia Coopersmith, the nervous “arthur,” as the local newspaper describes her. Tronsor, who last played Mrs. Vince Lombardi for Piedmont, is always a pleasure to watch. She embodies the kind, lonely writer and painter. She exudes warmth and understanding, concern and anger. And boy, can she scream!

The surrounding cast is quite large, but standouts were the restaurant denizens Nick Bishop, David Kolb and Bill Bucher and Lori Van Wallendael. They proved there’s no such thing as a small part. And acted as the viewers of the action, putting their 2-cents worth in. Kelly’s character is the spelling-challenged editor of the local newspaper who meets regularly with Bishop’s Mule Skinner and Father Tim at the only restaurant in town.

Eve Phillips is the fussy, nosy church secretary, Emma, who disapproves often, but is dedicated to Father Tim. Young Felicia Newton comes into her own as Puny Bradshaw, the rectory housekeeper who’s full of opinions and genuine affection for the household.

Gary Thornburg tells the corniest jokes as Uncle Billy Watson, and dishes out down-home advice to his favorite priest. Thornburg is the ideal comedy man in this sincere production.

And Athelene Carter serves up a treat as Sadie Baxter, the wise, wealthy woman who spends her money very wisely.

A lot goes on in this story, what with Father Tim trying to raise Dooley after his grandfather is seriously injured; Cynthia asking to “go steady” with Father Tim; young Dooley getting into and out of trouble and the many demands on the good father.

Father Tim has a lot on his mind, too — whether he should marry Cynthia, what to do for Dooley, how to solve his congregation’s problems. And even after he make decisions, there’s always another one looming. When will he retire and what will he do after that? He’s been a priest for 40 years. Can he give that up?

He does give up on his firm resolution to beat diabetes, until it beats him in a sad and worrying way. He has a crisis of faith — in God and in himself, that affects everyone around him.

Even his dear bishop, played by Shawn Van Wallendael, can’t quite reach him.

But love and forgiveness come to the rescue and Father Tim shares the message with his flock. At the same time, he finally tells young Dooley that the Lord has blessed him in a special way.

The play is at times, more like a book, requires some thought when there’s less action. It feels slow at times, as if it needed editing. Like Karon’s books, the play is less frantic than what we’re used to seeing, less about slamming doors and more about what’s in the heart and mind.

The opening night performance ended about 10 p.m., with a 20-minute intermission. There’s nothing offensive in the play, but it would be lost on young children or people with short attention spans.

That said, it’s a nice way to spend an evening. The simple set, made of rock walls, steps and a huge backdrop of the Blue Ridge Mountains, is very reminiscent of Blowing Rock, and easy for the actors to use.

You’ll feel like you’ve been part of Mitford and you’ll be glad for the respite.

Address: The streets of Salisbury