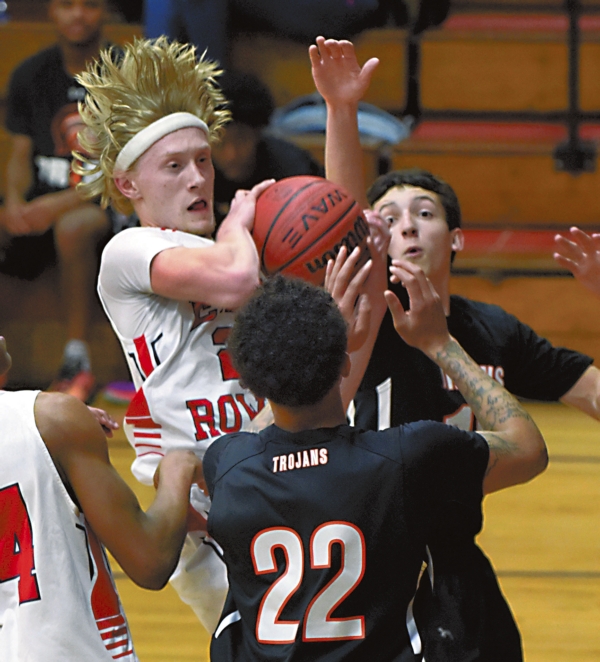 Prep Basketball: East boys put it together against NWC

GRANITE QUARRY — Sure, it’s easy to figure out teenagers.
The four previous outings by East Rowan’s boys basketball team had resulted in lopsided losses of 33,27, 26 and 41 points.
No one saw it coming, but on Friday night, the Mustangs hammered Northwest Cabarrus, 58-36. East was probably a 22-point underdog but instead, won by 22.
East had been winless against Cabarrus County teams this season. Now the Mustangs are 1-10.
“This is how it’s supposed to be,” East’s first-year coach Kurt Misenheimer said. “A packed gym, students cheering, guys having fun and guys sharing the ball. We haven’t shared the ball the way we did tonight very often.”
Everything bounced East’s way, but the Mustangs (4-16, 2-12 SPC) also were pretty darn good.
“It’s always tough on the road, and East was the team ready to play,” NWC coach Eric Jackson said. “No excuses. Give East credit. They made shots and they did a good job contesting our shots. They just played really well.”
East got 17 points each from Austin Love and Naquis Caldwell.
“Really, really proud of all my teammates,” Love said. “Naquis and Brevin (Goodlett) did a great job on the boards. Everyone played their role.”
East’s 2-3 zone looked basic, but it worked because guys were playing so hard. Northwest (10-8, 6-7 SPC) couldn’t buy an outside shot and couldn’t finish when it did get into the paint. Even the Trojans’ star, muscular forward Anthony Caldwell (Naquis’ cousin), missed some easy ones. He was limited to 17 points before he fouled out.
The ice-cold Trojans simply got blown out early in the fourth quarter. Had the Mustangs made their late free throws, they could’ve won by 30. They outscored Northwest, 18-3, in the final eight minutes.
“We clicked,” Naquis Caldwell said. “We had a great practice Thursday. That’s where it started.”
East wasn’t good early, but the Trojans missed numerous point-blank shots and led only 11-7 after a quarter.
“We didn’t box out and we didn’t rebound and we were fortunate we didn’t dig another big hole like we’ve been doing,” Misenheimer said. “I laid into guys pretty good. The rest of the night we boxed out and we rebounded.”
Ellis Taylor started the second quarter with a 3-pointer for East. Then Love scored eight points in a flurry to give the Mustangs a 24-20 halftime lead.
East achieved some separation late in the third quarter, pushing ahead 40-33 on tough drives by Naquis Caldwell.
When Love drained a 3-pointer from the right wing to open the fourth quarter, the Mustangs led 43-33. Paiton File’s free throw made it an 11-point game. Then Bravon Goodlett’s transition bucket put East up 46-33.
Then came the game’s signature play. Anthony Caldwell blocked a layup by East freshman Brevin Goodlett, who crashed hard to the floor and stayed down as the Trojans started a fastbreak.
When Northwest missed a layup and East rebounded, Brevin Goodlett was just getting to his feet on the other end of the floor. His uncontested layup put East ahead by 15.
“That play there, that’s when we knew it was all going our way,” Love said.
When Trevor Scruggs took a charge and Naquis Caldwell powered for a physical and-one, the Mustangs led by 18 with 3:11 remaining, and delirious, starved-for-victory East students were chanting.
East gave up the fewest points it’s allowed all season.
“Our defense was great,” Misenheimer said. “There were a lot of times when good defense led to easy offense.”