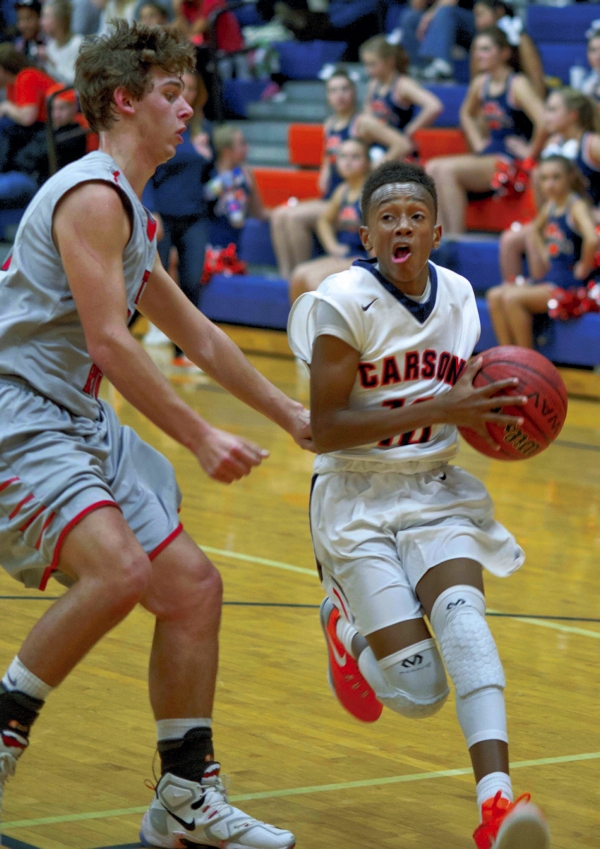 MOUNT ULLA — It was wild and it was crazy on Thursday in the West Rowan gym, but Carson’s boys found a way to win their 10th straight game against county opponents.
Carson, 7-0 in county games this season, made things interesting by squandering a 19-point third-quarter lead, but the Cougars made the plays at the end of regulation and overtime and beat West Rowan, 83-80.
“We had an awful lot of things going against us,” relieved Carson coach Brian Perry said. “But we overcame adversity. Maybe we grew up some.”
Among other things, Carson (10-9, 6-7 SPC) overcame a 30-point outing by West sophomore Caleb Mauldin and a career-high 20 points by junior Austin Love. Love had 15 in an unbelievable fourth quarter. Martavio Rankin added 16 for the Falcons.
Jamarius Hairston and Jailen Williams scored 20 points each for Carson. That was a career outing for Williams. Brenden Westbrook scored 19, while Owen White had 14.
Westbrook was the biggest hero for the winners. Carson trailed, 75-72, with the final seconds ticking away in regulation when he buried a clutch 3-pointer — the 11th for the Cougars — from the left corner.
“I just tried to keep my head,” Westbrook said. “Jamarius made the drive and I slid out to the corner. He made a great kick-out pass and I knocked it down.”
While the first quarter was even, Carson got 13 points in the second quarter from sophomore guards Williams and Cameron Prugh, and stormed to a 35-23 halftime lead.
“Then we came out and did everything we wanted to do at the start of the third quarter,” Perry said. “We kept the pedal to the floor.”
Carson’s lead peaked at 42-23, but that’s where the Falcons dug in.
Suddenly, the game turned. Carson’s only big body Ryan Bearden got into foul trouble, White missed a dunk, and the Falcons got a flurry of points from Mauldin inside. He had 13 in the third quarter, as West roared back.
“We started playing very unselfish on the offensive end,” Gurley said. “Down 19, we reeled them in. I was very proud of the fight we made to get back in it.”
By the end of the third quarter, West was on a 25-5 run and had a one-point lead.
“We stepped up our defense,” Maulding said. “And we were fighting for inside position on every possession.”
Williams, White and Hairston all had big fourth quarters for the Cougars and they slowed down Mauldin. But that’s when Love, a UNC baseball commit, took over.
Love’s physical, three-point play put the Falcons ahead, 73-70, with 30 seconds left.
“Love is just a great team guy,” Gurley said. “For him, it’s all about competing.”
Hairston countered with a Carson bucket. Rankin made two clutch free throws with 17 seconds left for a 75-72 West lead.
West was determined not to give up a 3-pointer on Carson’s final possession, but Westbrook still got an open look — and took advantage of it.
“We just had some defensive breakdowns,” Gurley said.
In the overtime, Hairston made two free throws to give Carson an 81-80 lead with 1:26 left. Hairston also banked in the shot for an 83-80 lead with 36 seconds left.
West missed several good chances to score in the closing seconds, and White pulled down a big defensive rebound as he was fouled with 1.6 seconds left.
“We finally got the stops we needed in the overtime,” Perry said.
White missed two free throws, and West got a timeout with 1.3 seconds left.
But the Falcons couldn’t get off a desperation shot, as Prugh got a deflection on a long inbounds pass to mid-court.
“For a long time, we couldn’t do anything right and West couldn’t do anything wrong,” Perry said. “But Westbrook’s shot saved us. We’re happy to leave here with a win.”