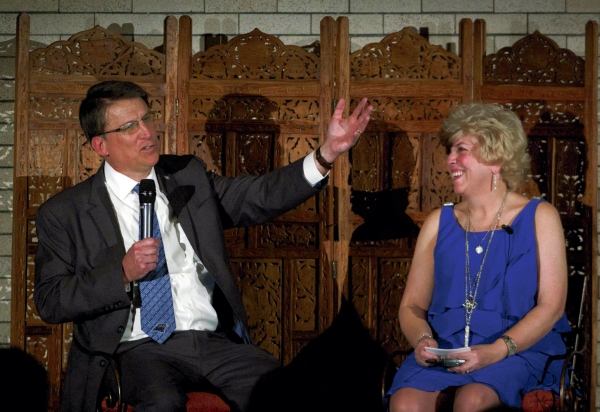 The Chamber of Commerce held its 90th Annual Gala Meeting on Thursday at the Salisbury Depot.

U.S. Congressman Richard Hudson and U.S. Congresswoman Virginia Foxx attended the event, along with other community leaders and elected officials.

During the event, the gavel representing the Chamber leadership was passed from Dari Caldwell, the 2015 board chairwoman, to Ted Goins, the new 2016 board chairman.

The improvisation group Now are the Foxes served as the master of ceremonies and provided the entertainment for the night.

The keynote speaker for the event was North Carolina Governor Pat McCrory.

In a question-answer session with Caldwell, McCrory talked about his economic accomplishments, the Connect NC bond and his priorities for the legislature’s upcoming short session.

As far as economic accomplishments, McCrory said some of the ones he was proud of were getting the state out of debt and creating employment centers.

“We turned our unemployment centers into career centers,” he said, “because I want to help people that are unemployed. There’s nothing worse than losing a job.”

McCrory discussed the benefits the Connect NC bond will bring to the state, including money for decaying educational facilities, state parks, water and sewer infrastructures and the military.

“Sometimes we have to remind ourselves and literally say that we have to get back to the basics of where we put our money,” he said.

When Caldwell asked McCrory what his top priorities for the short session were, McCrory’s first answer was pay raises for teachers.

He also talked about making sure the state has enough money in its reserve account.

The governor shared a memory from his time at Catawba College. He said the experience that impacted him the most was student teaching at North Rowan High School.

“That was an experience that made me grow up and it also made me realize … how hard (teaching) was,” he said.

After talking about his priorities for the short session, McCrory said the state can’t slow down the progress it has been making.

“We can’t let up. The competition is very, very tough,” he said.

Award winners for the night were:

By Mark Wineka mark.wineka@salisburypost.com Elmer Lam, whose love for railroading, skills as a salesman and passion to succeed, made him... read more