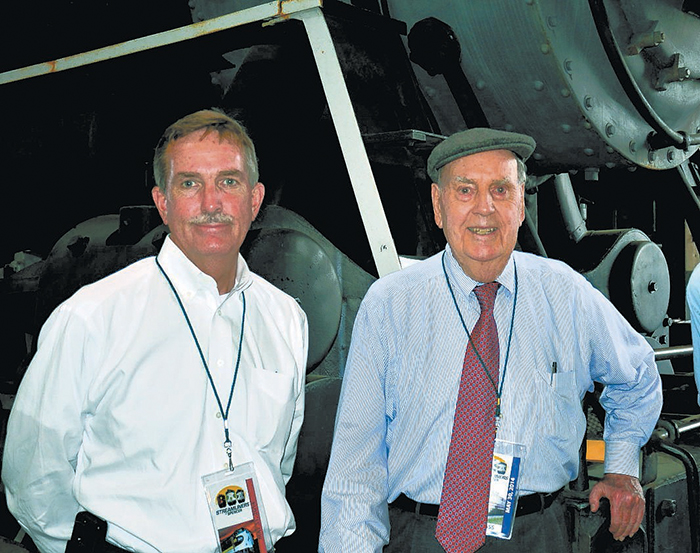 Submitted photo Elmer Lam, right, and his son, Stuart, during a visit to the N.C. Transportation Museum in May 2014.

Elmer Lam, whose love for railroading, skills as a salesman and passion to succeed, made him the perfect advocate for the N.C. Transportation Museum in Spencer, died Wednesday night in Charlotte at the age of 90.

Maybe the most incredible part of Lam’s legacy was his selflessness. He worked tens of thousands of hours on the museum’s behalf — raising money and twisting arms — and was never paid a dime.

“I never met anybody with such a passion for a place,” said longtime friend Kelly Alexander, executive director of the museum, located where Spencer Shops once served as Southern Railway’s largest repair facility between Washington, D.C. and Atlanta. “He greatly loved this museum.”

Lam was a longtime member of the museum’s foundation, serving as president for 10 years. For close to a quarter century, he constantly traveled to Raleigh to lobby legislators or meet with staff at the N.C. departments of Cultural Resources and Transportation.

If he thought meeting with a person would help the museum’s cause and raise its profile, Alexander said, Lam would drive his big Buick across the state in a day to find that man or woman and make his pitch.

“I can’t imagine how many miles that car had on it,” Alexander said.

Along with the late Dick Messinger, Lam’s behind-the-scenes advocacy for the museum led to the capture of government enhancement money that restored the Roundhouse and paid for first-phase improvements (roof, skylights and custom windows) to the Back Shop.

“He took us to another level,” Alexander said. “I don’t even know how to describe him … He understood what it took.”

Jim Wrinn, editor of Trains magazine, said what Lam did to save the Roundhouse back in the years when buildings were crumbling and visitation was low effectively saved the museum and led to the increasingly vibrant tourist attraction it is today.

When describing Lam, Wrinn recalled one of Woody Allen’s more famous sayings — that 80 percent of success is showing up.

“He was the epitome of that,” Wrinn said, adding how Lam had the energy of an 18-year-old, and people would report having run into him “in all these different places.”

Alexander said Lam had the skills of a great salesman, a result of his 37 years in manufacturing, customer service and marketing with DuPont.

Lam remembered dates, family connections and other key information related to the people he was lobbying. If he saw an article in the newspaper that he thought someone would enjoy, he would cut it out and mail it to them. He often sent flowers to secretaries of the important people he visited, and he was able to find humor in many things.

Alexander came to regard him as a mentor and second father.

“He had a mind like a steel trap,” Alexander said. “… And when you met him, how could you not like him?”

But more than anything, she said, Lam was a “real Southern gentleman.”

“Honestly, he was a good person,” she said. “Anybody who knew Elmer knew how genuine he was and how much he cared for the museum.”

Lam enticed his friend Roy Johnson of Charlotte to join the foundation board in 2004.

“There’s no telling how many trips he made to Raleigh and Washington,” Johnson said. “He did everything he knew how to do. He was quite successful in convincing folks of the potential of the museum. He was very clear and passionate about what it could become, even when we weren’t getting appropriations.”

Johnson said it’s hard to overstate Lam’s effort and impact on the museum. Johnson remembered when he and Lam would travel to the old Spencer Shops in the 1970s before the site became a state museum.

Lam became interested in the site even then, and Johnson said his passion for railroading goes back to his boyhood, when Lam’s father worked for Norfolk & Western Railroad in Roanoke, Va.

As Lam’s health failed in recent years and he was unable to drive his Buick, his trips from Charlotte to the transportation museum became less frequent. Family members brought him to the site for the last time about a month ago, Alexander said.

Last year, Lam especially enjoyed a visit connected to the Norfolk & Western Class J 611 steam locomotive, which had been refurbished at the museum before making a run back to its permanent home in his native Roanoke.

Johnson said Lam had seen that same locomotive as a boy, Though Lam’s eyesight was failing, he still took great delight in hearing the locomotive’s powerful whistle.

“He had such a good day,” Alexander said.

Yesterday: What do you know about the Christiana School?