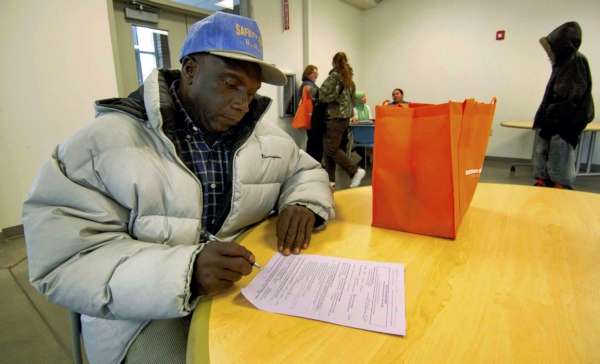 JON C. LAKEY / SALISBURY POST Jack Davis, who has been a shelter guest since November, fills out a survey for the Point-In-Time count during lunchtime at Rowan Helping Ministries. Volunteers fanned out in Salisbury to take part in the yearly count to get a snapshot of where the homeless population is taking shelter. The survey will help gather data and track the trends in homelessness which will better serve needs.

Address: The streets of Salisbury

SALISBURY — It’s lunch hour at Rowan Helping Ministries. After they eat, people approach a quiet table, tucked into a corner near the door. Rowan-Cabarrus Community College student volunteer Tereysha Robles asks those who stop by if they’d like to fill out a survey. It’s anonymous, she explains, pushing the purple paper across the table.

It asks where they slept last night.

The survey is part of this year’s homeless count, an annual effort by the U.S. Department of Housing and Urban Development to tally the number of unsheltered people across the country.

“This is a need through the year,” Sherry Smith, director of client services at Rowan Helping Ministries, said. Smith is the leader and organizer of the point-in-time count for Rowan County.

It may be a year-long need, but on the last Wednesday in January volunteers pound the pavement trying to get an accurate “snapshot” of those in need of shelter, Smith said. The numbers are used to adjust programs at shelters like Rowan Helping Ministries and give HUD a good look at the total homeless population nationwide. Last year, Rowan County tallied 108 unsheltered persons, Smith said.

Smith said she also pulls numbers from Rowan Helping Ministries’ crisis center, looking for those who list their address as the “streets of Salisbury.”

Wednesday night, student volunteers from Catawba College roamed those streets looking for people without shelter. Thursday, volunteers also set up at the Department of Social Services, the Rowan Public Library, Rowan Helping Ministries and other locations to try and get an accurate count.

The surveys are anonymous, and completely optional. The small slip of paper asks for first and last name initials, gender, ethnicity and whether the person slept without shelter the night before. If someone declines, volunteers don’t pressure them.

“We don’t want anyone to be ashamed of their circumstance,” Barbara Meidl, a student activities coordinator at Rowan-Cabarrus Community College, said.

In the hour they were there, the students handed out bags containing blankets, socks, jackets and toiletries to those without shelter for the evening.

Robles said that in that time, she’s realized just how diverse the shelter guests are. There are mothers with children, senior citizens and people with college degrees. She said that at one point, a boy she went to high school with sat down in the chair across from her and asked to fill out a survey.

“It just kind of hit me that this is real,” she said.

The Department of Housing and Urban Development gives volunteers seven days to conduct the count, but Rowan County is doing it in three, Smith said. Wednesday and Thursday’s counts are over, and today volunteers will be handing out surveys at Main Street Mission and Rowan Helping Ministries West.

To many, it’s an eye opening experience.

“People get thrown on the street for the smallest things,” Robles said.

She and the other students said they spoke to a mother who was kicked out because she couldn’t come up with an extra $50 to pay a bill.

At the Salisbury branch of Rowan Public Library, Kelly Young and Talesea Anderson, two Livingstone students interning with Rowan Helping Ministries, man a table. Their shift is from 11 a.m. to 5 p.m, and by 2 p.m., they’d only completed two surveys. But dozens of people have stopped by to ask questions. Anderson and Young do their best to answer. Anderson hopes that the count will show the community how to reach out to others.

“This is a start,” Anderson said. “You can’t do everything all at once.”

And sometimes, a friendly face can make all the difference. Hardship is part of life, student Charles White said.

Roa Saleh has spent the last five years volunteering with shelters and nonprofits in Cabarrus and Mecklenburg counties, and says she’s learned a lot by listening to people’s stories. In many ways, she says, the head count is almost a form of advocacy – it’s a way for the unsheltered to speak up about their need for support.

“They want their voices to be heard,” she said. “They’re not homeless only, they want to be heard.”

Homelessness is a complicated issue, Saleh said. People aren’t homeless just because of poverty, or addiction – it could be due to abuse, or the death of a loved one. Unsheltered persons have gone through unknown hardships, she said, and most of the time they just need a little support.

The point-in-time count shows that someone, somewhere, is reaching out.

“People need to see that they’re cared about,” White said.