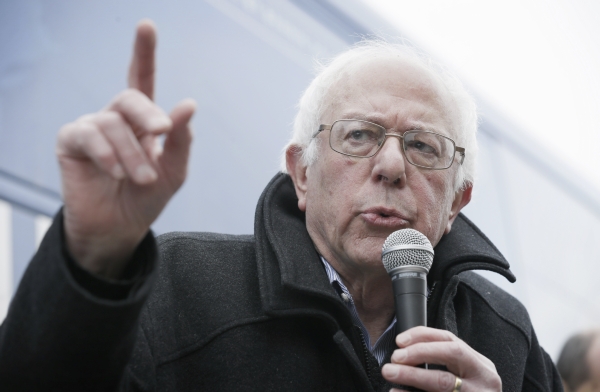 “Yes, we will raise taxes. Yes we will.”

When Sen. Bernie Sanders made that statement at a town hall in Iowa this week, Republicans all over the country leapt out of their chairs, cheering.

If Sanders somehow wins the Democratic nomination, he has already handed his opponents a weapon of mass destruction to use against him next fall. That quote will be plastered on every billboard, TV and tablet in every swing state that might affect the election.

As Republicans plunge wildly toward suicidal self-delusion in their own nominating process, the possibility of a Sanders victory gives them a flicker of hope.

If Democrats veer to the extreme left as the GOP careens to the extreme right, then Republicans still have a chance in November. All is not lost! The favorite slogan in Republican ranks these days is not “Make America Great Again.” It’s “Go, Bernie, Go.”

Yes, we know. Sanders qualifies his call for new taxes to underwrite universal health care by saying Americans won’t have to pay expensive premiums for private insurance anymore. But that argument runs into three huge problems.

The first is simply the word “taxes.” It’s toxic. Even if revenues are raised to pay for good programs, anti-tax orthodoxy has dominated American politics since the days of Ronald Reagan.

Just ask Walter Mondale, a fine public servant who said during his campaign against Reagan in 1984: “Mr. Reagan will raise taxes, and so will I. He won’t tell you. I just did.”

He was right, of course — Reagan raised taxes 11 times during his eight years in office. But Mondale was rewarded for his candor by winning exactly one state: his home base of Minnesota.

And “Medicare for all” is not the only Sanders proposal requiring new revenues. There’s free college tuition, higher Social Security benefits and a lot more. “Free” is a great rallying cry until the bills come due.

Which brings up the second problem: lack of faith in government. Sanders’ favorite solution for every problem involves a greater role for Washington. But in a Pew survey last fall, only 19 percent of Americans said they could “trust the government always or most of the time.”

That’s “among the lowest levels in the past half-century,” Pew adds. And yet when Sanders was asked directly in Iowa if he agreed with Bill Clinton that “the era of big government is over,” he pointedly dodged the question.

“Sanders’ ideas are deeply felt, but at the same time he has really overreached,” Drew Westen, an Emory professor who advises Democrats, told The New York Times. “The average American is not going to buy into a vision of the federal government running one big health care program. Many people are actually afraid of that idea.”

Which brings up the third problem. Sanders admits that the current Congress would never enact his ambitious ideas. So he calls for a “political revolution” to change the legislature and make it more receptive.

Here’s the reality: Sanders describes himself as a “democratic socialist” and the “most progressive” member of the Senate. But at its core, this is a center-right country. The chance for the “revolution” he’s instigating is just about zero.

So Sanders is doing exactly what Republican conservatives have done for years: stirring up his base with wildly unrealistic expectations, a sure recipe for the kind of frustration and disillusionment that drove GOP leaders like former Speaker John Boehner into premature retirement.

President Obama was dead-on when he explained the Sanders surge to Politico’s Glenn Thrush. He called him “the bright, shiny object that people haven’t seen before” — and Obama has credibility here, since he was clearly that kind of glittering novelty when he ran against Hillary Clinton in 2008.

But the analogy ends there. When Thrush asked Obama if Sanders reminded him of himself eight years ago, the president snapped, “I don’t think that’s true.”

Obama was more like Reagan, a candidate whose inspiring story and charismatic personality transcended ideology. “Hope and change” is a lot better slogan than “We will raise taxes.”

Many sensible Democrats agree with former Sen. John Breaux of Louisiana, a shrewd political mind, when he told the Times: “The early enthusiasm for Sanders reminds me of the (George) McGovern and Mondale races, where two good men were only able to win one state each in their presidential campaigns. Democratic voters don’t want that to happen again.”

Breaux’s right. But bright, shiny objects are popular in both parties this year.

When the publisher of National Review Magazine, Jack Fowler, called and asked me to write 300 words on why I... read more