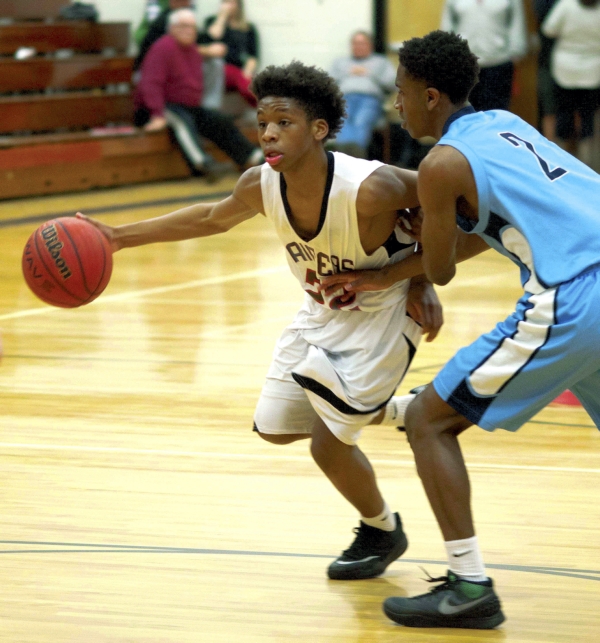 LANDIS — South Rowan’s boys were a fraction of a second and one clutch shot by West Rowan’s Martavio Rankin from winning their first game of the season on Wednesday night.
West beat the Raiders, 76-71, in overtime, overcoming 27 points by South sophomore Ahmod Hester, who made shots from every conceivable angle, and 21 points by speeding bullet Tre Littlejohn.
“No, no, no,” South coach Andre McCain would yell every time Hester launched a 15-foot runner, but they all kept finding the bottom of the net.
West got 19 points from sharpshooting Jayson Delgado and 19 from post man Caleb Mauldin. Mauldin actually had an off game and missed a lot of free throws, but he was persistent and he drew so many defenders it gave the Falcons open outside shots.
Austin Love scored 13 hard-working points for West. Payne Stolsworth added 12.
Leading 67-65, South had Colson Childers at the foul line, shooting two, with 10 seconds left in regulation. He had a chance to give the Raiders a two-possession lead.
The senior missed his first free throw but he made the second. That gave South a 68-65 lead, but it also left the door open for last-second heroics from Rankin.
Rankin had scored only one point all night when he rose for a desperate 3-pointer from deep in the right corner, in front of the West bench, with time running out. It looked good all the way. He swished it. Rankin punched the air, and that terrific shot also punched all the air out of South.
The Raiders (0-18, 0-12 SPC) headed to the overtime period drained and shaking their heads.
Mauldin got a three-point play early in overtime to put the Falcons ahead to stay, and Rankin made three free throws. South didn’t score until only 12 seconds remained in overtime when Hester made a 3-pointer.
West (6-11, 4-7 SPC) beat South for the ninth straight time and ended a six-game losing skid. The Falcons hadn’t won a game since the calendar flipped to 2016.
Littlejohn and Hester out-quicked the Falcons to the rim much of the night, but West stayed in the game by making 10 3-pointers. Delgado splashed five, mostly from the left wing, while Stolsworth made three.
The Raiders led 28-22 after an ugly first half. Childers had eight points in the third quarter as South held off some brilliant shooting by Delgado to hang on to a 51-47 lead.
Hester and Littlejohn combined for 16 points in the fourth quarter, with some smart passes by Ian Bradshaw leading to a lot of South layups.
The Raiders led by five late, but Nick Warren’s huge 3-pointer got the Falcons back within two.
Littlejohn’s layup on a slick pass from Childers gave South a 63-59 lead with 2:18 left in regulation, but the Falcons benefited from an unusual call with 1:44 remaining. The Falcons came up with a steal in the backcourt, and Love barreled to the hoop, as Childers set up to draw a charge. Love made the shot as whistles blew. Two refs had conflicting calls — one a charge, one a block.
After a prolonged discussion, the ruling was a double foul on Love and Childers and a jump ball. But the bucket was counted, and then West got the ball out of bounds.
The long delay sorting that one out, plus a disastrous ruling, had to take something out of South.
West finally caught up on Rankin’s buzzer-beater. Regulation ended 68-all.
West goes right back into action tonight at home against Carson.