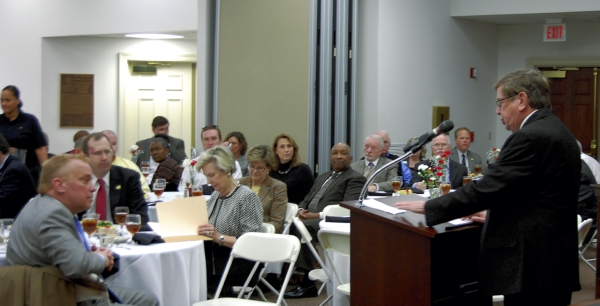 Kannapolis Mayor Darrell Hinnant was the guest speaker for the luncheon hosted by the Salisbury City Council. He talked about how the city included the community in major decisions and planning. Amanda Raymond/Salisbury Post

To kick off the 31st Annual Future Directions and Goal Setting Retreat, the Salisbury City Council hosted a luncheon on Wednesday.

Former mayors, school board members, business owners and education and community members were invited to hear Kannapolis Mayor Darrell Hinnant talk about how Kannapolis came back from its hardships, including the Pillowtex closing in 2003 that left thousands jobless.

“At every meeting, citizens came to speak before the council and men and women both were in tears as they were trying to figure out what they were going to do with their life,” Hinnant recalled.

Hinnant said the city had to make a change to help its residents.

“Previous leaders had looked back and pined for the good old days,” he said, “New leadership understood that we need to embrace the future, and innovating solutions would be required,” he said.

Hinnant talked about bringing the North Carolina Research Campus into the city and developing a knowledge-based economy.

HInnant said because of the research campus, an “era of collaboration” was born.

“It has been the key to our success and the successes that we expect to grow on in the future,” he said.

Along with collaborating with big community stakeholders like David Murdock, who helped develop the research campus, Hinnant said he included community members in the process of addressing the needs of the city.

Hinnant said the city asked citizens what issues were priorities for them and then attached a cost to the items and asked if they were willing to pay a certain amount in taxes.

Hinnant then talked about using incentives to get Gordon Food Service to expand into Kannapolis.

“We have lots of other opportunities coming. And it’s because we’re willing to be in the game and to be a part of it,” he said.

Towards the end of his talk, Hinnant spoke on the city’s decision to buy 46 acres of its own downtown area.

Hinnant said the purchase was necessary because even though Kannapolis had the research campus, people did not want to move there because there was no thriving downtown.

Hinnant concluded by saying that through partnerships, vision and innovation, Kannapolis was able to move forward.

“We believe that our community expects and demands a culture of bold leadership,” he said.