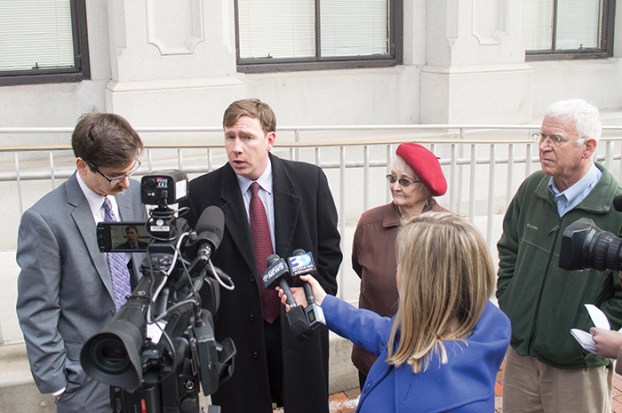 RICHMOND, Va. — A three-judge panel on Wednesday considered whether Rowan County Commissioners violated the U.S. Constitution during opening invocations from 2007 to 2013.

Attorneys on both sides of Rowan’s prayer lawsuit were in federal appeals court Wednesday for oral arguments. It was the first time attorneys have presented oral arguments in the case since the ACLU first filed the lawsuit in 2013 on behalf of three Rowan County residents. More significantly, it’s also the first time a federal appeals court has addressed the issue since a 2014 U.S. Supreme Court decision — Town of Greece, N.Y. vs. Galloway. Many of Wednesday’s arguments hinged on the U.S. Supreme Court’s opinion in the New York case.

American Civil Liberties Union attorney Christopher Brook, representing the plaintiffs, spent a large portion of his allotted time focusing on the fact that Rowan County commissioners — not chaplains or volunteers — offered prayers before meetings. Brook also argued that county commissioners coerced members of the public into participating in prayers.

Attorney Allyson Ho, representing Rowan County, countered that a prayer giver’s identity doesn’t matter — a chaplain is the same as a commissioner. Ho also said prayers before meetings are constitutionally allowed as long as they don’t “threaten damnation” or demonize others.

Ho spoke first during oral arguments. She said legislators at all levels pray before meetings. They have since the nation’s founding, she said. It happens in state legislatures, Congress and local government.

Ho then presented principles she saw as essential to the case — the suit’s focus has shifted since it was filed in 2013, and prayer is allowed as long as it doesn’t demonize others or preach conversion. She said the court would need to find a pattern of the prayer she described, not just one instance.

She had just reached the third of three principles when one of the judges fired off a question — a common occurrence during Wednesday’s oral arguments. Judges often acted as equal-opportunity interrogators for both attorneys.

In response to one of the initial questions, Ho said Rowan County’s prayers from 2007 to 2013 — the period cited in the lawsuit— were 100 percent Christian. Her answer prompted a follow-up question from Judge Dennis Shedd, who asked how the prayers could be considered nondiscriminatory with that statistic.

In her response, Ho said the prayers weren’t discriminatory because commissioners rotated the responsibility of giving an opening invocation.

Another notable exchange between attorneys and judges came when Shedd asked Brook whether a prayer would be unconstitutional if commissioners directed a prayer about members of the military to soldiers who were in the audience. Giving a hypothetical example, Shedd said a commissioner might pray to keep soldiers safe.

Brook hesitated as Shedd asked the question again. Brook asked for clarity about the question, which came as Brook was arguing that Rowan County commissioners directed prayers at members of the public. Commissioners’ prayers during the period in question were not for the benefit of commissioners themselves, Brook said.

“What if there are troops in the audience and (commissioners are) praying for the troops,” Shedd asked. “Why is there a difference?”

Brook eventually said the prayer would be constitutional.

Quickly after starting his oral argument, Brook gave multiple examples of prayer by commissioners. Among the examples was a prayer from former County Commissioner Carl Ford, who said “we pray that our citizens will love you Lord.”

Brook claimed Ford’s prayer and others were examples of invocations directed at the public. It countered an argument made earlier by Ho — that commissioners only pray for the benefit of themselves. Brook claimed previous court decisions plainly prohibit prayers directed at members of the public.

When addressing the issue of identity, Ho said it doesn’t matter whether a prayer-giver is a volunteer chaplain or county commissioner. Rowan’s case is no different than the Greece, N.Y. case, she said.

“Either way, it’s the government speaking,” she said.

David Gibbs III, who represents Rowan County, said the next step in Rowan’s case will likely be a written ruling. Judges could request more information, but he said it’s unlikely.

After oral arguments, people on both sides of the case spoke with reporters and outlined significant parts of arguments.

Plaintiffs Nan Lund and Robert Voelker, who attended Wednesday’s oral arguments, said the fact that commissioners have changed from offering prayers themselves to a pre-selected, volunteer chaplain is “an acknowledgment that they’re doing something wrong.”

Currently, Rowan County Sheriff’s Office Chaplain Michael Taylor gives opening invocations. County commissioners Chairman Greg Edds also gives a disclaimer at the beginning of meetings. The disclaimer informs attendees of his or her right to leave or not participate in prayers.

Gibbs responded to Lund and Voelker’s claim by saying he and other attorneys only advised Rowan County how to minimize its liability. A number of options exist for prayer before meetings, and a pre-selected, volunteer chaplain is one, according to Gibbs.

Cost to the county

Since the start of its prayer lawsuit, Rowan County has been represented by Texas-based National Center for Life and Liberty. The group is representing Rowan County for free. Gibbs said other attorneys from various states also have donated time — at no cost to Rowan County — to help with the case.

Although Rowan County isn’t paying its attorneys, it could be responsible for legal fees if the U.S. Court of Appeals for the Fourth Circuit upholds a ruling from the North Carolina Middle District Court that found the county’s prayer practices unconstitutional.

Edds, the chairman of the county board, said Rowan doesn’t yet have a commitment to pay legal fees from any outside entity or group.

Rowan has paid County Attorney Jay Dees less than $5,000 in connection to the prayer lawsuit. Dees previously told the Salisbury Post that most of the money stems from work one immediately after the lawsuit was filed.