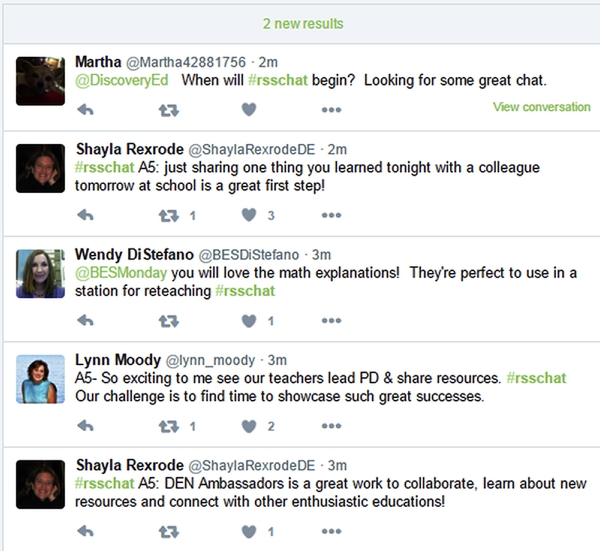 SALISBURY — The tweets flow thick and fast as teachers, principals and technology facilitators share ideas and dig deep into technology and programs in their classrooms. They tweet photos of themselves, bundled against the cold, comfortable on their couches.

April Williamson, literacy coach at Southeast Middle, said that a friend from Millbridge followed the chat during line-dancing class. Educators from across the state chime in on the conversation, and a group from Ecuador pops in to answer questions.

Andrew Smith, director of digital Innovation for the Rowan-Salisbury School System refers to the twitter chat as “throwing ideas against the wall.”

“Basically it was part of a bigger idea,” he said, “how do we do professional development differently?”

It’s often difficult to find time to train teachers, as their schedules are packed with classes, grading and other activities, Smith said. And recent state requirements for the school calendar make it hard to find training days. Smith said this led to a simple idea.

“Teachers need opportunities to learn outside of regular hours,” he said.

That sparked the Twitter chats. The school system brings in experts from different entities — from local organizations like the Crosby Scholars to national companies like Achieve3000 and Schoology — and allows teachers, staff and even students to ask any question they’d like. Last year, Rowan-Salisbury teachers were able to host a chat or two. It provides learning and training for teachers from the “comfort of their couch.”

Last year, the chats were held every other Tuesday, but Smith said that quickly became overwhelming. So they’ve altered the format, and for the spring semester, chats are hosted on the last Tuesday of every month. This semester there will be four chats with a connected topic: “Exploring the digital resources you already have.”

“Our teachers and students have these vast amounts of resources . . . but because they have so many, they often only know those resources at the surface level,” Smith said.

“I love it, because it gives me a chance to collaborate with people I don’t normally speak with,” Williamson said.

The chats allow Williamson and others to share ideas across school divides. Kindergarten teachers requested help for making full use of Discovery Education in their classrooms, where students don’t have individual laptops or tablets. And they got it.

When the conversation starts flowing, it can be hard to keep up with all the comments. Smith saod that once, #rsschat received so many tweets it was trending in Charlotte.

“It was intense, but it was also amazing,” Williamson said of Tuesday’s chat.

Williamson said that a lot of teachers began at RSS through lateral entry, so this gives them a chance to familiarize themselves with new programs.

“It definitely gives you a jumpstart to try new things,” Williamson said.
Chat ideas even give technology veterans a chance to take a new look at their programs.

However, Smith said, the most important part of professional development is the follow-up. That’s why this year, Rowan Salisbury is offering continuing education credits for participating in the chats. Teachers can earn half a credit if they participate in all four chats and then a follow-up in May.

“So you can get continuing credits sitting on your couch if you want,” Smith said.

But the chats are more than just a way to earn some credit, Smith said. It helps teachers connect across the system and across the state.

“It’s not just about getting continuing education,” Cole said, “it’s about getting ideas and resources to take back to your classrooms.”

Technology facilitators tweeted photos of e-mails they were sending out to their teachers, already spreading good ideas they saw in the chat. Knollwood Elementary Technology Facilitator Ann Crilley said she told her teachers to lurk if they weren’t comfortable commenting, because just reading through the chat can produce a pile of ideas.

As the chat closed, teachers tweeted “Great idea,” retweeting and quoting ideas they particularly liked for a last push for creativity.

“I think a lot of people don’t think about what a resource twitter can be,” Cole said.

The chat can be viewed by searching #rsschat on Twitter. The chat log and resources mentioned are also available on Storify at https://storify.com/21stBioSmith/twitter-chat-series-part-1-discovery-education

Next month’s Twitter chat will feature experts from Achieve3000. Schoology and Apple are expected to chime in on later chats in the series. Follow #rsschat on Feb. 23 at 7:30 p.m. for the next chat.