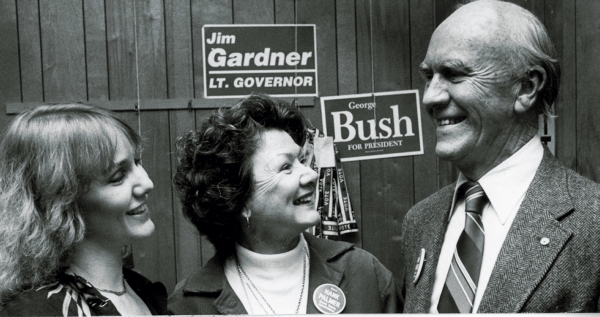 From left, Joan, Petie and Hank Palmer celebrating Hank's election to the Rowan County Board of Commissioners in 1988. File photo

SALISBURY —  When Hank Palmer headed the Salisbury-Rowan Chamber of Commerce and his wife, Petie, served as secretary, it wasn’t unusual for the family to gather around the dining room table at home and stuff envelopes all night.

Their youngest daughter, Joan, also spent a lot of time at the chamber office, which for most of Hank’s eight years as director (or executive vice president) was located in the Community Building on North Main Street — today’s Rowan Museum.

“I went there after school a lot and played, or pretended I was working,” Joan says.

The Community Building back then was cold and drafty in the winter and unbearably hot in the summer.

But the greatest thing Joan appreciated about her dad’s job at the chamber was his being able to be home most nights. This was a big change from Palmer’s days as a carbide engineer and salesman for Kennametals Inc.

The Massachusetts native and Dartmouth graduate had been a salesman for much of his career, gradually making his way down South. He always promised Joan when she was little that he would take her on an airplane during one of his business trips. A 5-year-old girl could only hope.

Hank and Petie Palmer, who had three daughters, moved to Salisbury from Roanoke in 1953 when Hank was still working for Kennametals, His sales region included North Carolina, and he often stayed in Salisbury at the Yadkin or Empire hotels in his travels between Charlotte and Greensboro.

“He loved Salisbury, and it was right in the middle of his territory,” Joan says. Hank persuaded Petie they should move here, and Joan says most of her early childhood memories revolve around houses on Ellis, Fulton and Council streets.

By 1959, Palmer was known well enough in Salisbury that business leaders tabbed him for the chamber job. “I didn’t know the significance of it, but I was thrilled,” Joan says, “because he was home. We were real proud of what he did.”

Hank Palmer served as executive vice president for the chamber from 1959-67 in one of the more important periods in Salisbury’s history during the 20th century.

It’s reflected in an email Joan received recently from Jody, one of her older sisters. Jody lives in Lexington, Ky.

“You were probably too young to remember the impact Dad had on Salisbury,” Jody wrote. “He took over the chamber right after Spencer Shops were closed and suddenly 2,000 people in this little town were out of work. It was Dad’s previous experience in several various industries and his natural sales ability that virtually saved the Salisbury/Spencer area from biting the dust.”

Jody said Hank Palmer knew the area well enough “to know what Salisbury had to offer and went after industries that would fit to relocate there.”

Back in Palmer’s days with the chamber — and it stayed like this into the 1980s — the chamber served as Rowan County’s economic development arm, its industrial recruiter. So the chamber’s work in landing Fiber Industries in the wake of seeing the county’s biggest employer, Spencer Shops, shut down was huge.

Another big thing that happened under the chamber’s leadership during Palmer’s time was Salisbury’s selection in 1962 as an All-America City.

Joan remembers Hank and Petie leaving her back in Salisbury as they accompanied the rest of the Salisbury delegation to the Fountainbleu Hotel in Miami, where a selection jury heard presentations from 22 finalists.

The recognition went to U.S. cities whose citizens had done the most outstanding jobs in the improvement of their communities.

Salisbury’s presentation in Miami listed 10 specific accomplishments of its citizens and leaders from 1960 and 1961:

• The raising of $220,000 in a one-hour meeting to build and lease a plant to Cottonsmith Furniture Manufacturing, with plans to employ 200 people.

• A 12-to-1 majority of voters going for a $500,000 bond issue for financing an industrial education center (no doubt, Rowan Technical College).

• The raising of $612,000 in a three-week drive to build a  community college auditorium and little theater on the campus of Catawba College. That would be today’s Keppel Auditorium and Hedrick Little Theater.

• Completing a 20-year of improvement plan for the downtown and starting on it by cleaning alleys, planting trees and shrubs, installing benches and finding off-street parking.

• Becoming the first city in North Carolina to have its entire school system fully accredited.

• Completing the city’s first major annexation in 44 years, It included approval of a $526,000 bond issue to extend water and sewer services to 2,122 people.

• Raising $80,000 for a Salvation Army Citadel-Youth Center, the same one on Bringle Ferry Road today.

• Sponsoring Salisbury’s first Christmas parade and seeing it become the largest in the Carolinas in the number of units and spectators.

Hank Palmer was in the middle of all of this.

It was probably his friendship with Hall of Fame sportscaster Lindsey Nelson that put some icing on the cake for Salisbury’s All-America City nomination. As the winner of National Sportscaster of the Year, Nelson had come to Salisbury for the first two NSSA events when they were sponsored by the chamber.

Nelson happened to be in Miami for a sports convention and made himself part of the Salisbury delegation for two days. He also spoke to the jury on Salisbury’s behalf.

One of Joan Palmer’s embarrassing moments as a youngster came in the fourth grade. She was a new student at Henderson Elementary in late 1961 when her teacher, Mrs. Hunt, asked her to stand in front of the class and explain why her parents were in Miami.

Joan did the best she could telling about the All-America City nomination, but it didn’t seem to register with her new classmates.

“Fourth-graders — they looked at me like, ‘OK,'” Joan recalls. “But Mrs Hunt realized it was a big deal. That was very embarrassing, but I was really, really proud.”

In her home office today, Joan Palmer has a personally autographed poster from famed Olympic track star Jesse Owens — again, thanks to her dad’s uncanny ability to make friends. Owens came to several of the early NSSA banquets.

“He was a really neat guy,” Joan says. “He would make a special trip to come over and see Mom and Dad, and he liked to talk to teenagers who didn’t know what they were doing. I knew he was somebody important, and I knew what he had done, but maybe not the significance.”

Hank Palmer resigned from the chamber in 1967 when Holmes Plexico offered to sell him Rowan Printing Co. It was a difficult decision for Hank, Joan says, because he loved the chamber job and all the people.

“It is completely impossible for me to put into words my feelings at leaving this position,” Hank said in his resignation letter. “I’ve enjoyed every job I’ve had, but never one more than this.”

The downtown business became Palmer’s Rowan Stationers Inc. After 20 years, he sold the retail store and concentrated solely on advertising specialties, changing the name to Hank Palmer and Associates.

He worked at the business pretty much up to his death in December 2007. “If he had to crawl into work, he would — and he did practically,” says Joan, who has continued the business as Palmers’ Promotions.

Hank and Petie Palmer were immersed in the community for more than half a century. They were in the original group of people who started Piedmont Players. Hank served a term as county commissioner, and they were involved in First Presbyterian Church.

They loved to have parties at their split-level home on Confederate Avenue where Joan now lives. Petie, who came to land acting roles in commercials and movies, died about three years ago.

They will be missed — and probably remembered — Thursday night when the Rowan County Chamber of Commerce holds its 90th annual meeting at the Depot. Joan plans to be there.

“They really believed in it, so I believe in it, too,” she says.

Yesterday: In 1982, a visit with retired Senator Sam in Morganton

A Post reporter and photographer made a visit in March 1982 to the Morganton law office of retired U.S. Sen.... read more