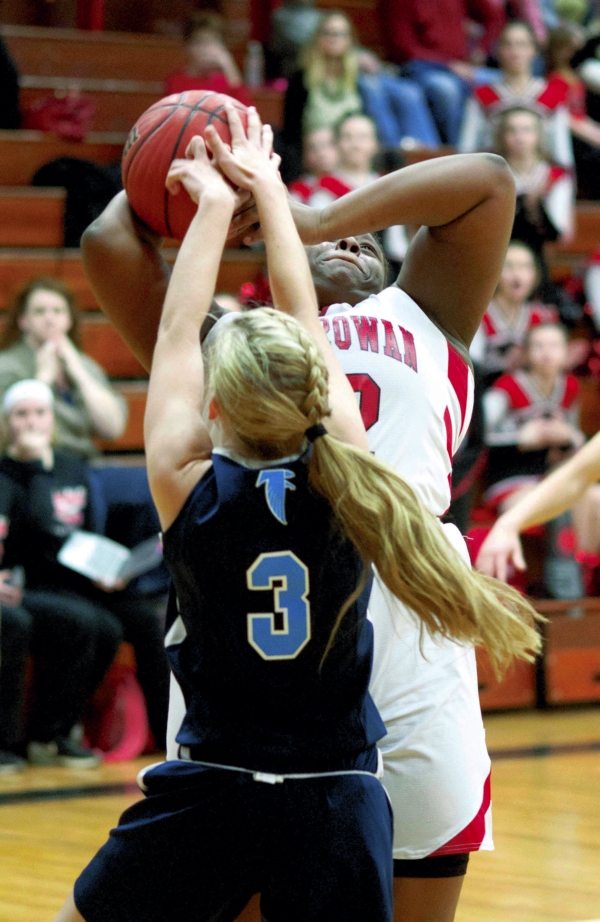 JON C. LAKEY / SALISBURY POST ... In the final seconds, West Rowan’s Taylor Martin (3) blocks a shot by South Rowan’s Malaysia Williams (32) under the basket. After the play, a technical foul was called on Williams and Martin sank both free throws. West went on to win the game, 73-70, Wednesday night in Landis.

LANDIS — It was 70-all in the South Rowan gym with time running down when West Rowan’s Khaila Hall made an unsuccessful dive for a steal at midcourt — and then Egypt Alexander did the same thing.
Now it was 5-on-3, and South got the ball inside to Malaysia Williams, just to the right of the hoop with six seconds left. Williams had a sure layup, but suddenly Taylor Martin was there, and the 5-foot senior made a clean block — two hands on the ball.
“I saw she was wide open and I had four fouls, but I knew I had to get there,” Martin said. “It was a good block.”
South had the possession arrow and would’ve gotten the ball out of bounds underneath with a chance to win, but it didn’t get that chance. Williams was whistled for a technical foul.
“I was on the floor and she was kicking at me,” Martin said. “It was just one of those heat of the moment things.”
Martin made two technical free throws, and then the Falcons got the ball. Hall made a free throw with five seconds left for a three-point lead. South freshman Janiya Downs’ heave from past half-court was short, and 73-70 was the final.
“It was a tough way to lose because we had a play that I know we would’ve scored on,” South coach John Davis said. “But you’ve got to keep your composure.”
West (15-2, 11-0 SPC) managed to stay unbeaten in the league, despite tremendous efforts by South’s Downs (16 points), Williams (15), Riley Corriher (15) and Taziah Hardin (15).
Egypt Alexander poured in 25 points for the Falcons. Martin had 16 and Mary Sobataka had 13.
“West has got a heck of a post player (Alexander), but our girls are growing up,” Davis said. “These girls have worked and worked. They’re learning fast now and they’re starting to see some results.”
Alexander laid in 15 points as the Falcons pushed to a 41-30 halftime lead in a fast-paced game.
When Martin and Sobataka made 3-pointers early in the second half, West led by 17 — 49-32. The game appeared to be over. But for the Raiders, it was just starting.
Hardin and Corriher led a furious comeback that shocked everybody, and when Hardin scored on a steal-layup combination to close the quarter, South trailed 55-52.
“We got lazy, we stopped boxing out, and we didn’t get back on defense,” Martin said. “We did a lot of things wrong.”
And South (3-15, 2-9 SPC) did a lot of things right.
When Hardin made two free throws with 5:44 left, South had come all the way back to take a 61-60 lead. The game see-sawed from there.
South went in front, 70-66, with under two minutes left, but West got even when Martin found Shanice Miller for a layup and Hall made a steal that led to a layup by Martin.
Then Martin made that block at the end — and the decisive free throws.

By Mike London mike.london@salisburypost.com SALISBURY — Expectations are higher than the walls at Newman Park as Catawba starts a new baseball... read more