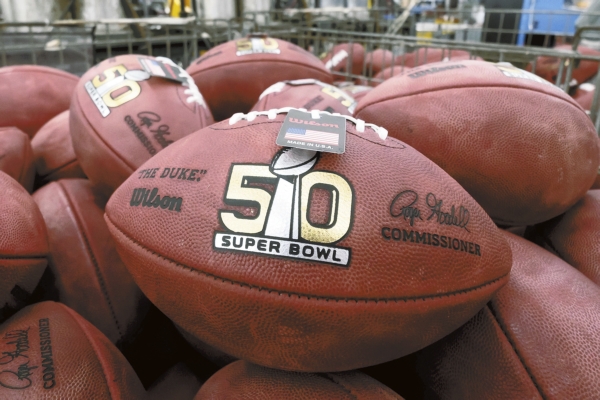 AP Photo/Rick Osentoski ... Official balls for the NFL’s Super Bowl 50 football game are seen in a bin prior to final inspection at the Wilson Sporting Goods Co. in Ada, Ohio, on Tuesday. The big game will be in Santa Clara, Calif., on Feb. 7.

CHARLOTTE (TNS) — Ron Rivera chuckled when asked how his dabbing, selfie-posing, Superman-strutting, touchdown-ball-giving players will handle all of the attention that comes to a team in the Super Bowl.

“They’re going to embrace it,” the coach of the Panthers said. “They earned it. They deserve it.”

It’s one of the lessons Rivera learned 30 years ago when he was a linebacker on the 1985 Bears in Super Bowl XX. You remember, that team with the great defense, the cocky quarterback, and the shuffling music video that rankled the Establishment? If it sounds somewhat similar to this year’s Panthers, well, it’s because Rivera has embraced a lot of the teachings of his former coach, Mike Ditka.

“One of the things coach Ditka emphasized to us was to enjoy the moment,” Rivera said on Monday, the day after his Panthers won the NFC title. “The moment doesn’t come very often. It’s hard. It’s hard to get to where we are right now.”

In fact, the moment has even more interesting parallels. These Panthers have a chance to become the first 18-1 Super Bowl champions since the Bears, and only the fourth team in 50 Super Bowls to win the title with one loss or less. And Rivera could join Ditka as one of four men to have won a Super Bowl ring as a player and as a head coach (Tom Flores and Tony Dungy are the others).

“It’s one of those things you work toward and hope for the opportunity,” Rivera said. “To be in that class is really neat. I’d like to be able to emulate what coach [Ditka] did and win it.”

Rivera has been emulating Ditka all season, and he has no intention of stopping now. In fact, he is determined to stay the course all the way to a championship.

“Do what you’ve done,” Rivera said of his strategy these next two weeks. “Some of my experiences in coaching, you get to certain experiences like the playoffs, and sometimes you get a little bit of panic. ‘Am I doing enough? Should I do more? Should I change this?’ I told our coordinators [Monday] morning, we’re going to stick to what got us to where we are. We’ll emphasize that to the players and make sure we keep our personality.”

On the field, and off it.

So expect the Panthers to have plenty of fun during the Super Bowl 50 experience. They’ll be brash and confident and colorful in their media responsibilities. They’ll dance and celebrate their first downs and pass breakups. And, if things work out, they’ll have a big party with the Lombardi Trophy at the end of it.

“It’s really a matter of managing it more than anything else,” Rivera said. “The thing we’ve got to remember is what we’re playing for, and that’s to win it. It’s not about getting there. It’s not about being a part of it. It’s about winning it. And that will be our main focus.”