No cause determined yet in Statesville Blvd. garage fire 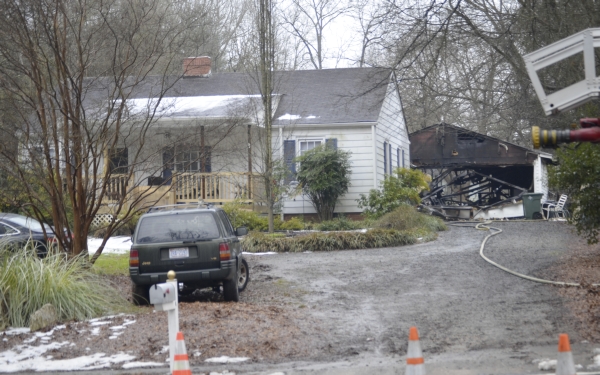 Salisbury firefighters put out hot spots in this detached garage Wednesday morning that caught fire at 1441 Statesville Blvd. Fire officials have not determined a cause and say none of the family's vehicles were parked inside. Shavonne Walker/Salisbury Post

No cause had been determined Wednesday afternoon in a fire inside a Statesville Boulevard detached garage, officials said.

The homeowner was home at the time of the fire, but not near the garage. No injuries were reported. There were no vehicles parked inside the garage, but there were some items stored inside, said Salisbury Fire Department Battalion Chief Tim Hurlocker.

The fire was contained to the garage, but the house received some damage because of the heat.

Hurlocker said the fire melted some vinyl siding on the back of the house, and the garage was completely destroyed.

“It looks like it started in the rear of the structure,” he said.

It’s believed someone driving by the property, which is located at 1441 Statesville Blvd. near McCoy Road, called 911. The fire occurred just after 6:30 a.m. Wednesday and was under control by 7:05 a.m.

Salisbury Fire Department responded while Cleveland and Franklin Fire departments were covering the rest of the city until units could be available.