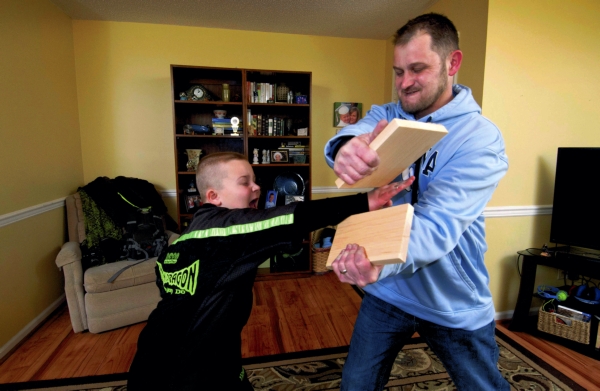 Cole Price, 9, breaks a board held by his father, Chris Price, in the family’s home. Cole, who attends Hurley Elementary School, recently won a national martial arts award because of his ability to break boards, bricks and other hard stuff with his hands and feet and a loud yell. Chris Price, a former martial artist and boxer, has been working with Cole, and they are finding success. Jon C. Lakey/Salisbury Post

SALISBURY — Cole Price seems like your average 9-year-old. He spends time with his father Chris, mother Cari and brother Cooper. He’s a straight-A student at Hurley Elementary and enjoys baseball and golf.

But he’s also an internationally recognized championship breaker who has competed in more than 16 martial arts tournaments in the past year.

In December, Cole came in second place in the Amateur Breaking Championship’s 17 and under division at the Super Grand World Games XXVI held in Hilton Head, S.C. First place went to a 17 year-old, who won with a score of 29.67. Cole’s score was 29.66.

When he found out he’d placed second, Cole was thrilled.

“I was screaming in my head,” he said.

Cole says he started breaking when he was five. His dad, Chris, a former martial artist and boxer, taught him to break ¾-inch pine boards in their living room. It’s still their location of choice. Chris holds up a board, positioning it just right. Cole gives a short, sharp yell and aims for the board with a ridge hand or a spinning kick.

“Sometimes boards have weak points,” Cole said, “but mostly I miss the weak points, and I hit the hard spots.”

But with Cole, the board breaks just the same. Cari says they send the broken pieces to family members to use for firewood. The bricks are harder to get rid of.

He hasn’t looked back, since. These days, Cole sets up in his family’s covered driveway. The bricks form a bridge over two cinder blocks, and are covered with a washcloth or a battered Merriam-Webster’s dictionary to protect Cole’s hands. Here, Cole breaks tile, long landscaping bricks and short, scalloped decorative ones. When he’s done, his dad tosses the broken halves into an unused flowerbed in front of the house.

Not too long ago, the pile grew so large that the family had to cart it to the dump. Chris pulls out his phone and shows off a picture, a truck bed piled high with broken brick and tile.

Breaking is about conditioning and mentality, Chris said. Anyone can break, as long as they don’t hold back from fear. Cari and Cooper, age 5, both say they’ve broken a board. But breaking a brick takes a bit of conditioning.

“The more you hit something the tougher your bones get,” Chris said.

Cole attends the Iron Dragon Tae Kwon Do Academy and studies under instructors Tola Rose and James Fisher. There, he learns sparring and forms — but they don’t teach breaking.

“It’s encouraged to break but it’s not like there’s not somebody there to teach,” Cari said.

When Cole joined Iron Dragon, the Price family was told the dojo already had a champion breaker.

Through the Iron Dragon, Cole began competing in tournaments in February 2015. On Jan. 9, 2016, Cole was recognized as the Top Breaking Competitor in the Dojo Organization by accumulating the most points in the tournaments throughout the year and for finishing first place in the 11-year-old and under breaking division.

It’s an accolade that takes a lot of practice to maintain.

“My dad tries to get me breaking every day,” Cole said.

Well, not every day, Chris said. The two take break days to let Cole’s hands heal, and to prevent him from getting injured. Chris knows from personal experience how easily that can happen — he said he broke his hand last year while trying to break a brick.

Cari says that when they got home from the urgent care, Cole broke all the material they had.

“I guess it was a mental thing,” she said.

In the meantime, breaking and martial arts has helped Cole navigate other problems. Since he started, he’s become more confident and social, Cari said.

“I think the martial arts has helped him come out of his shell a bit,” she said.

Cole plans to defend his title and keep studying martial arts. He says he’d like to learn how to break using his head and wants to learn Jui-jitsu when he’s older.