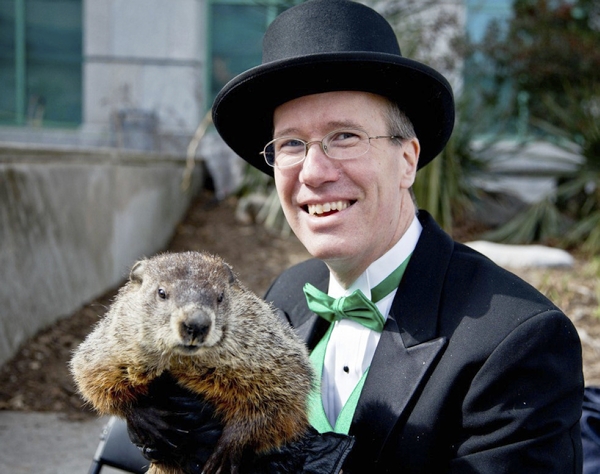 Sir Walter Wally, the groundhog, and friend at a previous Groundhog Day event.

RALEIGH — Salisbury’s own Susan Kluttz, secretary of the newly formed N.C. Department of Natural and Cultural Resources, makes her debut this year as the official “Groundhog Whisperer” at the N.C. Museum of Natural Sciences’ 20th annual Groundhog Day celebration on Tuesday, Feb. 2, on Bicentennial Plaza.

She will join former museum educator John Connors, who will be outfitted in top hat and tails, to assist Sir Walter Wally the groundhog with the forecast.

Judging from his track record over the last 15 years, Wally tends to favor long winters, but you never know. The day’s activities kick off at 9 a.m. and run through 1 p.m. The shadow ceremony where he’ll make his prediction begins promptly at noon.

Whether you call him a groundhog, a woodchuck or a “whistle pig,” one thing you can’t call Sir Walter Wally is inconsistent. Regularly listed among the Weather Channel’s “Top 11 Groundhogs to Watch,” Wally comes in at No. 7 on the list this year and he continues to gain national attention for his “hognosticating,” or rather, prognosticating abilities.

Since 1998, Wally has been right 55 percent of the time, while his cousin to the north of us, Punxsutawney Phil, has been correct a measly 33 percent. Not only does this mean Wally is more accurate, but he tends to favor longer winters as well. According to legend, if the groundhog sees his shadow on Feb. 2, we’re in for six more weeks of winter.

“I am looking forward to hearing what Wally has to whisper to me about the coming of Spring,” says Kluttz. “My fingers are crossed that the day will be cloudy so that Wally does not see his shadow. I am ready for warmer weather!”

Immediately following the ceremony, Wally will be at his special station where those with cameras can pose for pictures alongside the famous weather predictor. The ceremony will be held in the museum’s auditorium in case of inclement weather.

Visitors can also take advantage of educational stations like “Snakes in Winter,” “Signs of Spring,” the “History of Groundhog Day” and more, as well as fun games and activities including a make-your-own groundhog hat station. For kids 6 and under there will be a special storytime called “Animals in Winter” at 10:30 a.m. and meet the animals at 11 a.m., 11:30 a.m. and 1:30 p.m. in Windows on the World.