Something warm for a cold winter night 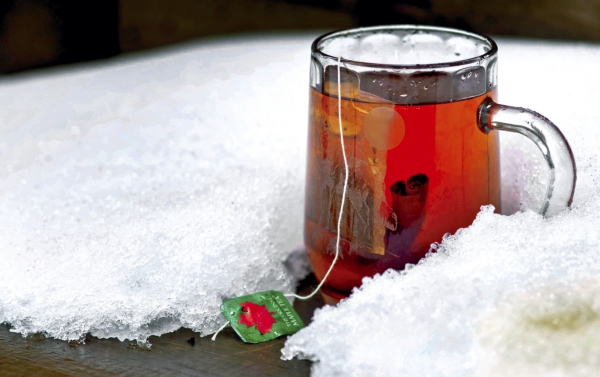 Having recently survived the blizzard of 2016, the icy grip of winter and the bread and milk stampede, we thought you could use a drink.

How about a nice hot mug of healthy juices, combined with a soothing tea? How about something spiced up with ginger and cinnamon to warm you all the way up?

Some research shows that drinking a glass of hot water with lemon is a great way to start your day, that it removes toxins and can even ease pain.

Ginger, featured in some of these drinks, is great for digestion and can also ease pain, such as arthritis. It’s also know to relieve coughing, particularly when mixed with hot water and honey.

Mixing lemon, water, turmeric and red pepper can boost your immune system and reduce inflammation. Turmeric is a great antioxident. Here’s a simple recipe: To 1 to 1 1/2 cups boiling water, add the juice of half a lemon, 1/4 tsp. turmeric, a pinch of cayenne pepper, a pinch of coarse salt and a pinch of raw cane sugar. Mix well and drink. That should be a real eye-opener.

One of these drinks is a calorie bomb, but you’ve got to splurge now and then, especially when you have to go out in the cold.

Today was nice, but the cold rain is coming, so get to the store while you can and head to the juice and tea aisles.

We stuck with alcohol-free drinks, but if you decide to spike your mug of hot apple cider, we certainly won’t tell anyone.

From everdayhealth.com’s Heart Health daily newsletter we found these warming recipes that are also good for you.

To make a winter wonder sweet Adeline, simmer equal parts apple, cranberry and pomegranate juice until steaming hot, then pour some over a chamomile tea bag in a large mug. Once it steeps for a few minutes, you can sweeten with a drizzle of honey or agave nectar, and add some fresh lemon juice to taste. And if you enjoy this right before bed, you won’t have any trouble nodding off since the drink is caffeine free.

Heart-health-boosting cinnamon and ginger provide a spicy kick to the hot not-toddy, which is perfect for serving to a group after an afternoon of sledding. Whether you make this in a slow cooker or in a pot on top of the stove, start with eight herbal tea bags, a gallon of water, some sliced, chopped fresh ginger, and some cinnamon sticks. When it’s brewed, sweeten to taste with honey as well as some slices of fresh lemon. Adding the lemon slices at the end of cooking will ensure that the rinds don’t become bitter.

As an alternative to cider, try brewing up a batch of this spicy and warming ginger drink. It couldn’t be simpler to make: Sliced fresh ginger is simmered in hot water for about 5 minutes, then the ginger is strained out, and brown sugar and honey are added to taste. You could also add a little lemon juice if you like. Use about one-quarter cup of fresh sliced ginger for every 5 cups of water. Ginger is a heart healthy ingredient, and with its warming, almost citrusy taste, it’s also known to help soothe an upset stomach.

This jewel-colored drink fills the kitchen with delicious aromas as it simmers. To prepare, simply flavor cranberry juice with a little ground cinnamon and cloves, bring the mix to a boil and then reduce heat to a simmer. In a separate small saucepan, combine the whole cranberries with sugar, cinnamon and a splash of water. Once the berries burst, let them cool, then thread them on decorative toothpicks and use for a fun garnish.

Preheat the oven to 300 degrees and put the white chocolate in a glass or ceramic baking dish. No need to chop. Toss it in the oven and roast, stirring every 10 minutes or so. The white chocolate will be lumpy and crumbly, but that’s okay. Keep going until it takes on a peanut butter-like color, about 30 minutes total.

Meanwhile, bring the milk and cream to a simmer in a small pot. If you like, toss in a vanilla bean or cinnamon stick to add another layer of flavor.

When the white chocolate comes out of the oven, scrape it into the hot milk-mixture and whisk until smooth. Season with a pinch of salt.

Ladle into mugs and enjoy.

The recipe is from thekitchn.com

Combine cranberry juice and ginger in a 2- to 3-quart pan over medium heat. Bring to a simmer and cook to infuse flavor, about 20 minutes.

Stir in lime juice and 1/3 cup sugar; stir until sugar has dissolved. Taste and add up to 1/4 cup more sugar if desired.

Pour through a fine strainer into a thermos or heatproof pitcher (discard solids). Serve hot.

Here’s a heart-warming, hand-warming apple cider that will make your home smell heavenly.

Pour apple cider and maple syrup into a large stainless steel saucepan. Place the cinnamon sticks, cloves, allspice berries, orange and lemon peel in the center of a clean piece of cheesecloth; fold up the sides of the cheesecloth to enclose the bundle, then tie it up with kitchen string. Drop the spice bundle into the cider mixture.

Heat over moderate heat for 5-10 minutes, or until the cider is very hot, but not boiling.

Remove from heat, discard the spice bundle. Pour the cider into mugs and add a fresh cinnamon stick if desired.