For food to be good for kids, they have to eat it 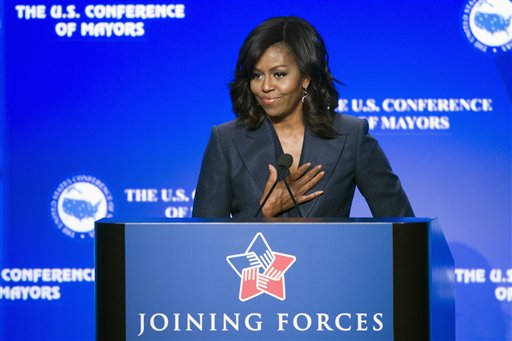 The challenge for the nation’s school lunch program is not unlike that of the parent of a picky eater: Creating a healthy, balanced meal is just half the trick.

The other is getting the child to eat it.

Since healthier standards were put in place for school meals in 2012, more fruits, vegetables, low-fat dairy products and whole grains have been features of the breakfasts and lunches that reach 31 million students in 100,000 schools every day.

First lady Michelle Obama, who led the effort to put healthier meals on cafeteria tables, had good intentions, and changes were necessary, given the size of the nation’s waistline and worries about obesity rates among children as well as adults.

But the U.S. Agriculture Department’s ambitions were bigger than the children’s stomachs. It turned out that many of them were put off by the new menu and were throwing away too much food. Sometimes parents have to give a little, and we now agree that’s true of the school lunch program, too.

Last week, the Senate Committee on Agriculture, Nutrition and Forestry approved a sensible, bipartisan bill that would reauthorize the school meals program for another five years but scale back some of the regulations.

Many of the details will be hashed out later, but this much is known: School meals would retain the emphasis on fruits and vegetables, but the USDA would delay until at least 2017 plans to cut back on the amount of sodium in menu items. In addition, the department would rewrite the rules so whole grains could make up 80 percent of the lunch line instead of the current 100 percent. Some school nutrition directors have said it is difficult to get students to eat whole grain pastas and other starches.

The compromise, worked out by Sens. Pat Roberts, R-Kan., and Debbie Stabenow, D-Mich., gives schools more flexibility without gutting the improvements toward healthy cafeteria eating. The Improving Child Nutrition Integrity and Access Act of 2016 now goes to the Senate floor, where it deserves to be approved.