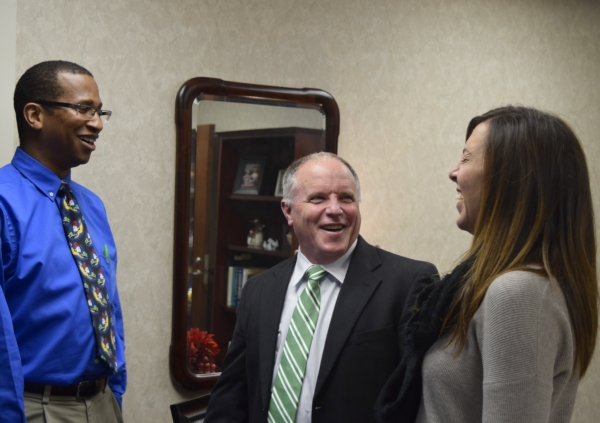 Dr. Daron “Chip” Buckwell has been with Kannapolis City Schools for 31 years. In that time he’s been something of a jack-of-all-trades, serving as an athletic trainer, an in-school-suspension teacher, a student services employee, a middle school principal, assistant superintendent and, as of Jan. 16, superintendent.

“I have honest to goodness enjoyed every role for different reasons,” he said.

But when he started working with Kannapolis City Schools in 1985, Buckwell said he didn’t plan on being much more than an athletic trainer. But life had other plans.

“There were some people who saw things in me that I didn’t see in myself,” he said.

Buckwell was encouraged to go back for an add-on certification on his master’s degree, and began working in drop-out prevention at A.L. Brown High School in addition to training. When he started teaching, Buckwell said, it was a common thing for kids to drop out of A.L. Brown, cross the railroad tracks, and pick up a job at Cannon Mills.

“That wasn’t an intentional type of thing,” he said. “It was just an opportunity.”

In time, the kids stopped going over the tracks, and the mill closed. Buckwell became the director of Student Services, and then the principal at Woodrow Wilson Elementary and then the principal at Kannapolis City School’s only middle school. He stayed there for 12 years. Over the years, issues have changed, technology has advanced and Buckwell said he’s seen the children of former students walk through the halls of his school. But despite everything he’s seen change, there’s one thing that doesn’t.

“It’s about kids and schools and communities,” he said.

And it’s about relationships. His ability to build and maintain relationships with fellow teachers, administrators, students and the community is what Buckwell said defines him. Immediately after his appointment as superintendent, Buckwell visited the schools in the system, talking to teachers and principals and strengthening bonds. Most know him well from his 31 years in the system.

“That kind of response is heartwarming,” he said.

“We’ve got to stop the bleeding of the turnover rate,” he said.

Reducing turnover rate means that the system keeps quality teachers and is not spending time, money and resources to retrain a large portion of its workforce every year.

The system is hiring quality teachers, Buckwell said, but it’s hard to offer them reasons to stay when they can go to another system and receive better pay, have access to better opportunities or be closer to family.

“There’s no incentive to stay – no monetary incentive,” he said.

In Kannapolis, many teachers choose to go to Charlotte-Mecklenberg, Buckwell said, or to schools that may be closer to home. Caps on teacher pay in the state also don’t attract new teachers, or provide a reason for veteran teachers to stay. There isn’t a lot that the system can do about pay increase or driving distance, he said, but they can make new teachers feel at home. Buckwell wants Kannapolis City Schools to have a family atmosphere.

“I think a lot of the reasons to work here is because of our kids and family and the family atmosphere we’ve been able to build over the years, and to be able to pay attention to kids and teachers and the teacher’s families… You know — people,” he said

Because Kannapolis City Schools is not a geographically large district, it’s easy for teachers, parents and administrators to become a sort of family.

“People know the people who are teaching their kids,” he said, “and I think that’s huge. I think it’s monumental.”

Working with teachers and getting to know them personally is a small fix that Buckwell believes can make a big difference.

“It’s trying to make it personal, and make them feel like they are truly valued and wanted and appreciated,” he said. “And it has to go beyond money — it has to go to that personal relationship.”

Buckwell plans to implement Learning by Design, a professional development program across each grade level that will focus on structured curriculum writing and pairing new teachers with a teacher mentor. The system is also focusing on adding online learning classes that will provide extra benefits for teachers. However, the problem is a “multifaceted” issue, Buckwell said, and it won’t be fixed with the flick of a finger. But they can start by changing the atmosphere

“I don’t think you throw people or programs at any problems like turnover rate,” he said. “I think you build internal capacity, you build teachers who are learning more about teaching and learning, who are learning more about themselves and you keep those people and you build that capacity and they teach other teachers. I really believe in that formula… If you can have professionals, teacher leaders — true teacher leaders — in classrooms in grade levels you can make a big difference in who stays and how good that instruction is.”

Buckwell also wants to expand the career and technical education program and ensure that it’s more hands-on. The system already partners with RCCC to offer a welding class for high schoolers that allows them to earn a certification by the time they graduate, and Buckwell plans on adding more. But he plans to keep things “simple and compact,” to stay focused on the end goal.

“You can do anything you want to do but at the end of the day, it’s what happens when that classroom door shuts in the morning and teachers start teaching,” he said.

Yesterday: What do you know about the Christiana School?

Joe Renegar of Christiana Lutheran Church needs your help. The photo above was found in the church archives, and Renegar... read more