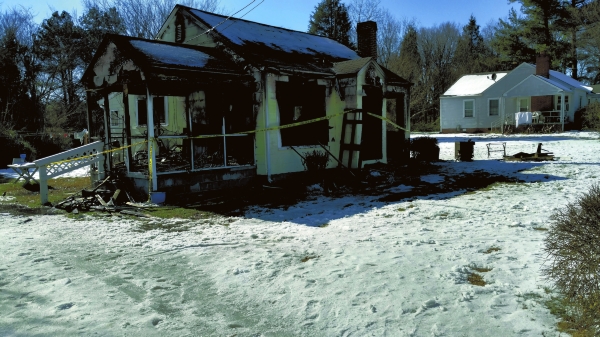 A woman resident was injured Sunday morning in a fire that severely damaged this house at 613 Gold Hill Drive, Salisbury.

SALISBURY — An older women, who lived by herself, suffered burns on her back and arms as she escaped a fire Sunday morning at her Gold Hill Drive home.

The woman, whose identity was not given, was lying in front of her house when three off-duty Salisbury firemen, carpooling and on their way home from a shift, were the first on the scene.

Next-door neighbors called 911 about the house fire, and the Salisbury department was dispatched at 8:29 a.m., with the first unit arriving at 8:34 a.m. Kepley judged the house was about 50 percent involved and fire was blowing out of the front of the house when the department arrived.

“We got lines down and got a knockdown,” Kepley said. The fire was called under control at  8:59 a.m. Firefighters made their attack from the outside.

“It looked like the heaviest involvement was in the front part of the house,” Kepley said. A pair of of other battalion chiefs are continuing to investigate. Kepley said the cause was still not determined.

The woman reportedly told firefighters something had awakened her and she was able to crawl out of the house to safety. She had a dog who was kept outside. Rowan County Animal Control was called in to make sure the dog was taken care of in the owner’s absence.

Duke Energy also was called in to deal with some arcing electrical lines on the ground.

“I’m pretty sure the house is destroyed,” Kepley said.

Because of increased staffing due to the snow and sleet storm, Salisbury Fire responded with four extra firefighters who normally wouldn’t have been there, Kepley said.

She said the mostly snow-covered street did not hamper the department’s response. “We were able to get there fairly quickly,” she said.