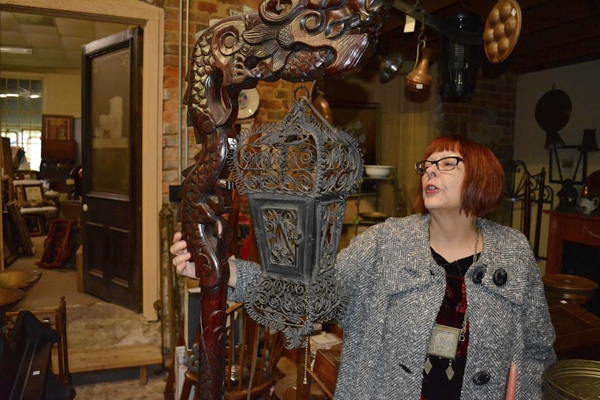 Priscilla Clark looks over an Asian gong stand at 1839 Antiques, which she has paired with a Chinese lantern. Susan Shinn/For the Salisbury Post

Interior designer Priscilla Clark is a treasure hunter for clients Priscilla Clark likes to think out of the box. The local designer scopes out Downtown Salisbury businesses for items she can reuse and repurpose — or upcycle, as she is fond of calling it — for clients.

A recent rainy afternoon finds her popping in several places, to see what she can discover.

Her first stop is 1839 Antiques, 218 W. Cemetery St. If you’ve never been to Franchot Palmer’s, you are missing a treat. Remember the scene in “Raiders of the Lost Ark” where they store the ark in a cavernous warehouse? It’s a lot like that — but better, because you can indeed find real treasure here.

To demonstrate, Clark pulls out an old Asian gong stand she found on another visit. It’s an elaborately carved dragon. With it, she pairs a Chinese lantern from the 1950s that Mary Walker from Across the Pond gave her. Walker has given Clark any number of vintage light fixtures.

“When I saw this stand, I thought of the lantern,” Clark says. “I have one client that’s got this Chinoiserie thing going on. I brought this lantern to see if it works, and it does.”

There’s a minor problem. Clark doesn’t like the black finish of the metal lantern. Not a problem. She plans to refinish it with a copper or rose gold finish. “Those are the metals that are really on trend right now.”

Venturing farther into Palmer’s building, she spies a wrought-iron gate. Using S-hooks and strong chains, you could suspend the gate from your kitchen ceiling and hang pots on it, she says.

It fits in perfectly with the Steam Punk movement, she notes, a design movement based on the mechanization of the Victorian era. “It kinda mirrors what’s going on today with technology. You see a lot of Steam Punk at Restoration Hardware and Anthropologie. You can mix with Victorian or other antique pieces. It’s the kind of look that appeals to younger people who are collecting antiques.”

Clark says she wouldn’t mess with the wrought-iron finish at all. “I’d leave it raw.”

Then she spies a large and beautiful walnut frame that once had a mirror in it.

“You could do a few different things with this,” she says. “You could put a mirror back in it, or a piece of art to display the art in an interesting way. You could make a cork bulletin board or a chalkboard for your kitchen. You’re dealing with a solid piece from another era. It’s got history. It’s been around.”

A good rubbing with Tung oil or linseed oil can bring a finish back to life, Clark notes.

“This is the best place I know of to get stained glass,” she says.

Clark pulls out an arched piece made with lead came, an architectural technique that stands up to the elements.

Palmer guesses the piece is American, made at the turn of the 20th century.

Clark would pair it with a console table in an entryway. “This would completely set off your entry. Your entryway is your first impression in your home. You want it to pop.”

Clark also has a discussion with Palmer on an unusual, two-level footed shelf that Palmer thinks was made in harness making. It’s got a seat on one end and Clark loves it for its sculptural look. Because of this, she thinks it would work well in a contemporary setting.

“If it were freestanding, you could see it at a distance,” Palmer says.

Clark says that in sourcing items for clients, you have to be patient.

From Palmer’s, Clark drives a couple of blocks over to Great Finds and Designs, 429 N. Main St. It’s a great place to find furniture and accessories.

“It’s sold on consignment, so it changes around quite a bit,” she says.

“You can put your feet up on it, or you can make it a small occasional table with a tray,” Clark says. “It’s a really versatile piece.”

In another room, a windowpane wooden and glass table decoration catches her eye. It could be used as a centerpiece on a dining table, on a side table, or outside on a porch, she notes.

Clark notices an ornate black and gold mirror that a friend from Canada would love.

It’s then she realizes she can’t find her phone. She almost backtracks to Palmer’s, but the saleswoman suggests she look in her car first. She does, and finds it. Crisis averted, she makes her last stop of the day at Salisbury Square Antiques, 111 S. Main St.

“If you’re doing upcycling, this is a great place to come,” Clark says, as she passes by a variety of booths.

She’s found some white milk glass lamps from the 1920s on which she wants to try some shades she’s brought along.

“They’re selling for the bargain price of $20 for the pair,” she notes of the lamps.

She doesn’t care for the shiny brass bases, but that can be easily remedied with Rustoleum spray paint or silver leaf or gold leaf.

She puts on a colorful striped shade — one that’s deliberately made upside down so that it flares out at the top, not the bottom.

“It’s a statement shade,” she says.

“Look how nicely this works,” she says. “Does it look old? No, it looks quite contemporary. Make sure that your shade hides the harp part of the lamp.”

On the other lamp, she puts a linen-colored drum shade for a completely different look. She points out that Hobby Lobby has a huge selection of lampshades.

Clark is helping a client find treasures like these to appoint her 1960s-era modern ranch.

Clark has assisted her client in finding fabrics to reupholster pieces.

“I’ve found a good workroom for her to use, and good sources for upholstery fabrics,” she says. “With this client, we saved money in a certain area. We’ve found some accessories that are less expensive, so she can have the more expensive couch she wants. It’s a question of balance. Put your money into something that will last you in the long run.”

For more information, contact Priscilla Clark at 704-223-8452 or priscillaclark61@gmail.com.

It is hard to believe that the first month of the New Year is almost over. Time never seems to... read more