Editorial: Jonas, we were ready for you 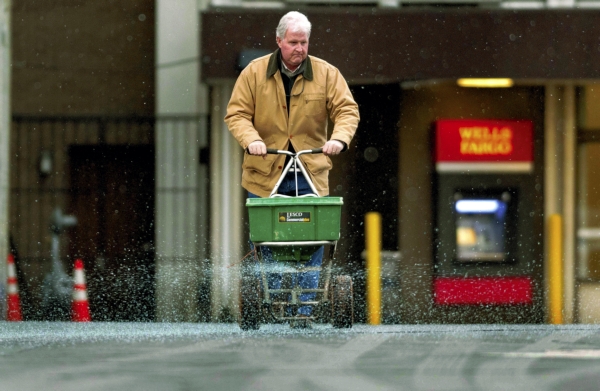 Jeff Matthews uses a spreader to cover the parking lot at Wells Fargo bank in downtown Salisbury with ice melt on Wednesday afternoon. The forecast for the area called for icy conditions for the next few days. Jon C. Lakey/Salisbury Post

It would be easy to  watch television and read newspaper reports about an approaching winter storm — especially the season’s first — and wonder whether everyone should just get a grip.

We live in an age when weather events such as the one we saw Friday and Saturday are given names. This one was dubbed “Jonas,” and going in, it was difficult to discern from all the weather models forecasters were throwing at us what exactly to expect.

Fear drives our reactions. It’s why we flood the grocery stores, fill up our bathtubs with water, cancel school and big events, rearrange our work schedules and tune into local news and The Weather Channel around the clock. The biggest fear with Jonas was we would see  a repeat of the 2002 ice storm. Some of us still haven’t gotten over that one.

As these things usually go, we usually blame ourselves with overreaction. Didn’t we used to deal with winter weather without all this fuss? Wasn’t common sense enough to survive snow and ice 20, 30 and 40 years ago? Shouldn’t it be enough today?

Though we go through so much weather hand-wringing today, in the end you have to say it’s probably for the best. Rowan County officials, for one, did an exceptional job over the past several days being prepared for the worst.

Rowan County Commissioners Chairman Greg Edds’ declaration Thursday of a state of emergency may have seemed like an overreaction, but he showed a lot of foresight in doing it. If Jonas proved overwhelming for us, Edds’ move would help in receiving federal aid.

Rowan County Emergency Services and Director Frank Thomason were proactive in preparing for all kinds of scenarios. To his department’s credit, Thomason took the coming storm seriously and likewise issued the appropriate warnings.

As always, state Department of Transportation crews did an excellent job of pretreating roads for the icy mess to come. Salisbury city and other municipal teams throughout Rowan also remained at the ready, though this kind of ice and snow accumulation never is the easiest thing to attack.

The American Red Cross and Rowan Helping Ministries went into emergency response mode, ready to provide shelters as needed. Utility workers across the region answered the call with their usual heroic work. And overall, Rowan County motorists demonstrated a lot of sense in the way they drove — if they had to be on the roads — and otherwise heeded warnings and stayed home.

Were we guilty of overreaction to this storm dubbed Jonas? Sure, aren’t we always? But in hindsight it was better to brace ourselves for the worst, than have to pick up too many of the pieces later.