Now that storm system has moved on, time for ‘recovery mode’ 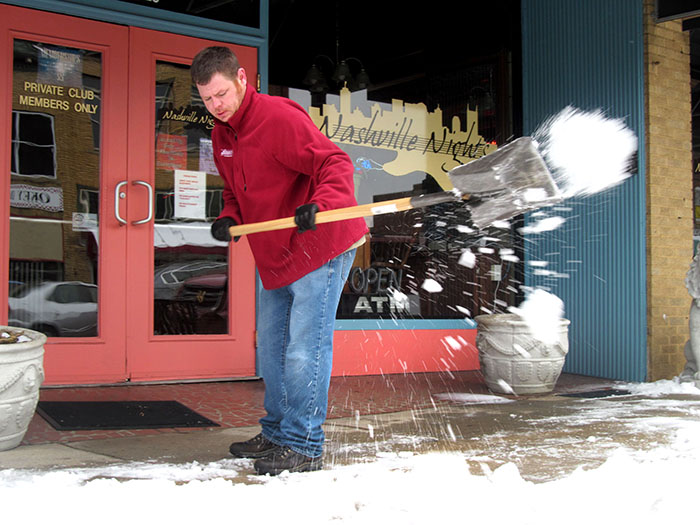 SALISBURY — By Saturday morning, it was over — the snow and sleet had passed through, and it was as though Rowan County brushed itself off and took inventory.

Overall, thanks to plenty of preparation, it appeared the county weathered this first winter storm as well as could be expected.

Power outages were virtually non-existent. Primary U.S. and N.C. highways were mostly clear. Traffic accidents were few. Many businesses tried to go back to at least limited, if not full hours. No weather-related deaths occurred. Even daytime temperatures rose enough above freezing to allow for some melting.

But now’s not the time to get cocky. Some weak trees and limbs could still come down and cause problems. Secondary roads, side streets and whole subdivisions are still completely covered and tough to navigate. Frigid overnight temperatures refroze many spots that melted Saturday and will do so again tonight.

Thomason participated in a 1 p.m. Saturday conference call of community leaders, and he said the overriding message from them was travel remains treacherous on secondary streets and roads. It was enough to hamper mail delivery in much of Rowan County for a second straight day.

All the pushing and scraping concentrated on major highways Saturday, and work may not start on most of these secondary streets until tonight or Monday morning.

Thomason said he and others are still strongly recommending that people don’t drive unless they absolutely must, but there is light at the end of this long weekend.

“We’ve definitely moved into a recovery mode,” Thomason said. “… You prepare for the worst and hope for the best. We skirted this one once again.”

The weather system that passed through Rowan County Friday and Saturday spared the county of ice accumulations that fell farther south and east and especially impacted areas such as Wake and Johnston counties.

Thomas said he had heard of “zero storm-related issues” related to utilities. Utility crews who were staged in Rowan County as additional Duke Energy resources have been released and sent other places, Thomason said.

Steve Monday, chief forecaster for Rowan County Weather, said he expected an overnight low of 26 degrees and a high today of 39. The low tonight will be around 20 degrees.

Monday received reports of varied snow/sleet accumulations — from 1.1 inches in Salisbury to 2.5 inches in Spencer and 3.3 inches in Faith. He agreed the ice accumulation wasn’t enough to measure.

“We may have gotten lucky and missed that altogether,’ Monday said.

Kevin Neal, county maintenance engineer for the N.C. Department of Transportation, said Saturday he expected Interstate 85 through Rowan County to be clear, though some icy spots could occur from water that refroze. He confirmed that secondary roads are still mostly covered in snow.

The DOT followed a tier-system approach to their snow and ice removal, which calls for crews to achieve bare pavement on the U.S. and N.C. highways before moving on to the secondary roads.

“I have full confidence in my guys that we are able to handle it,” Neal said, describing how his DOT crews had been working 40 straight hours after putting in a full day Thursday. They haven’t even gone home to check on their own families, Neal said.

“My guys have been there consistently since before this started,” he added. “When it comes to showing what they’re made of, they really do shine. It’s times like this that they show their dedication and commitment.”

Neal said the DOT won’t stop “until all roads are clear.”

As of 6 a.m. Saturday, the city of Salisbury reported it had plowed more than 1,100 road miles and used 65 tons of sand and 16 tons of salt. City crews put their top priority on clearing emergency routes before moving to secondary streets.

At noon Saturday, a city update said, “We are starting to see progress on the roadways, but they will still be dangerous, especially overnight.”

The Waterworks Visual Arts Center’s 2016 Oyster Roast was held as scheduled Saturday night at the Trolley Barn in Salisbury.

Today, “The Gospel Voices with Matthew Weaver” concert scheduled for 6 p.m. for the One Church One Child Ministry has been postponed and will be rescheduled.

Catawba is canceling the reception planned for artist Ann Bourque and her exhibit of graphite drawings in the campus’ Corriher Linn Black Library today. No alternate date has been set.