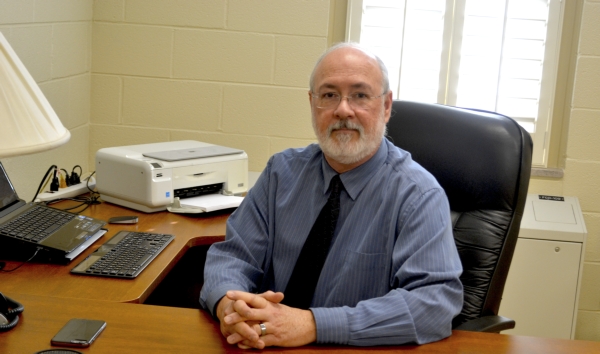 Cook in his office at FUMC.

At one time or other, almost everyone needs a little help from someone who isn’t a family member or a friend, someone who can help put life’s challenges in perspective.

Churches have long been a place for people to seek such help through counseling, and a downtown Salisbury church has now established a counseling center on site.

Recognizing a need for more counseling services in Salisbury, John Arey, director of  Methodist Counseling and Consultation Services of Charlotte, began speaking to First United Methodist senior pastor Mark Conforti about setting up a counseling center at the downtown church.

The talks were fruitful, and in the fall of 2015, the First Methodist church council approved a proposal to make room for a counseling center, the newest satellite office of Methodist Counseling and Consultation Services. Therapist Garry Cook now has an office at First United Methodist Church where he sees clients. Services are confidential and open to anyone — not just Methodists — seeking help.

Cook describes his counseling approaching as holistic, one that includes the spiritual side of things. Although his approach is “theologically informed,” it is not Christian counseling, says Cook, who uses the methods of traditional psychotherapy.

“I would never force my beliefs on the individual, and I definitely don’t pound people over the head with the Bible.

“I really try to help the individual explore the issues and find within themselves the answers that fit their lives, or find the resources they need to discover those answers.

That means he tries to avoid giving advice.

“As soon as I start telling someone what to do, I know I’m way off base. I’m wary of therapists who have too much advice to give.”

Cook plans to approach local pastors to see if he can be helpful to them. Pastors, he notes, are often in a unique position of being aware that a person might be struggling with something that a therapist could help with. The services he provides do not replace more traditional pastoral ministry but augment it, Cook says.

As an undergraduate, Cook majored in psychology at Campbellsville University in Kentucky. Back then, he had an inkling that he wanted to pursue counseling, he says. But he also wanted to be a pastor and actually served a church in that role while he was still attending college. He later went to seminary and did some supervised counseling at that time.

He went on to serve as a pastor in both Kentucky and Alabama and did a lot of counseling as a pastor, he says, which convinced him that therapy was where his passion and calling lay. He found a clinical training program at Baptist Medical Center in Birmingham and did a three-year clinical residence there and ultimately became a full-time counselor.

After moving to North Carolina, Cook worked for 15 years in community mental health as a social worker.  When the state revamped the mental health system, Cook began to feel so frustrated he could no longer stay in the profession. “I wasn’t sure we were helping people,” said Cook, whose wife, Carla Lang is a pastor at New Covenant Church in Archdale and also a therapist.

He then began working in a hospital-based employee assistance program in Alamance County and pursued a small private practice. He still has a private practice but says that will be reduced as he redirects his energies to his work in Salisbury.

“Everyone goes through difficult times — personal loss, life transitions, and struggling relationships,” Conforti says. “Talking with a therapist can help us move through and beyond those times.”

Although First Methodist Church provides office space, the counseling service is entirely funded by the fees it collects for services provided. An initial assessment and diagnostic session is $150. Appointments after that are $125 per session. Some insurance plans cover some of the cost of counseling sessions.