Rowan sees plenty of precipitation, but not many emergencies 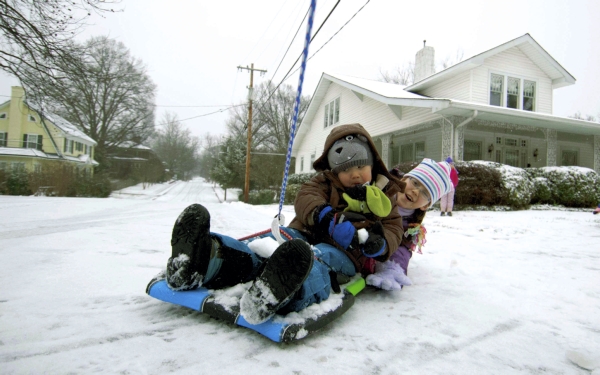 Noah, 3, and Makara, 8, Trick ride on a sled on Jackson Street pulled by their father, Brad, on a snowy morning. Snow can be fun, but what about school? Jon C. Lakey/Salisbury Post

With slick roads and winter precipitation piling up on Friday, most Rowan residents heeded the advice of law enforcement and emergency responders — don’t drive unless it’s necessary.

First responders received a light to average amounts of total calls for service on Friday. For large portions of the day many roads were barren, with the exception of Department of Transportation employees and a smattering of cars.

At noon, local first responders had received 213 total calls for service, according to Rowan County Communications Director Allen Cress. It was a low number for a snow day and average for any other day, Cress said. Similarly, the 10-county N.C. Highway Patrol area that includes Rowan had received 252 calls for service by 4 p.m. It was also a number considered light for a day with a notable precipitation totals.

In China Grove, Police Chief Eddie Kluttz said police had no reports of accidents, and morning traffic in the area was nonexistent. He said the majority of businesses were closed.

Many events and agencies in other communities were also closed Friday. If it was scheduled for Friday, chances are it didn’t happen.

Perhaps the only people driving around en masse were Department of Transportation crews, who plowed roads for hours. Shortly after noon, DOT employees Larry Smith and Richard Bentley were refueling trucks and dusting off ice and snow for another journey onto roads of Rowan.

While they were refueling and recharging for another run at the DOT facility on Camp Road, Smith and Bentley both named roads in western Rowan as the worst in the county.

Exact precipitation totals were unavailable for Rowan on Friday afternoon. The National Weather Service early Friday morning received reports of one inch, each, in Faith and Salisbury. By 12:37 p.m., however, the National Weather Service received a report of 2 total inches of sleet in Faith. Two total inches of snow and sleet were recorded in downtown Salisbury on Friday afternoon. Final totals for Friday are expected to be available early Saturday morning.

Winter precipitation stopped for a period of a few hours Friday afternoon, but picked back up with increasing force by the evening. At least two additional inches of wintery precipitation were expected in parts of Rowan from the storm.

“We have the ability to set it up in times of significant events or event disaster for the county and it provides coordination over multiple jurisdictions,” Thomason said. “Because of this storm event, we did see the need to set it up.”

“It’s not currently staffed,” Thomason said Friday morning. “However, we’re fully set up. It’s tested and ready to be staffed if needed.”

Rowan Helping Ministries Executive Director Kyna Grubb said usually when there is inclement weather the RHM homeless shelter doesn’t typically see an overabundance of people simply because some family members take in their relatives. The shelter actually had about six open beds on Friday.

Grubb said during storms like this one staff also expedite the in-take process with a background check and not require clients to interview with a case worker.

The Crisis Assistance Network was closed Friday, but the shelter is always open and the kitchen served people who needed a meal.

Grubb said 40 percent less people stopped by the kitchen than the year before. The staff and volunteers served 90 people at the kitchen.

In fact, Grubb expects staff to serve in the kitchen today because the weather was expected to worsen, making it harder for volunteers to get to the shelter. Some volunteers were unable to stop by the shelter Friday. However, food manager Nate Valentine went to some volunteers and staff members’ homes to pick them up and take them to the shelter.

States of emergency remained in effect for North Caorlina, Rowan County and Salisbury on Friday. China Grove Mayor Lee Withers on Friday also issued a state of emergency for the town.

Rowan’s relatively good fortune wasn’t echoed in all nearby counties. In a news conference on Friday, state officials said the winter weather had caused a total of four weather-related fatalities statewide. Briefly, 2,000 people were without power for a period in Gaston County. On Friday evening, Duke Energy customers along the I-95 corridor saw much more widespread power outages. More than 20,000 people from Raleigh and Rocky Mount to Florence S.C. were without power Friday evening.