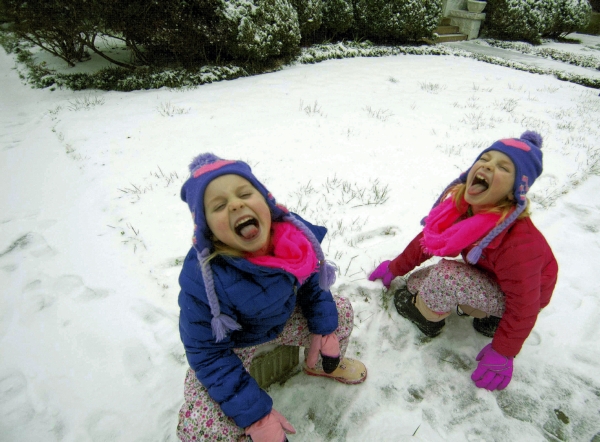 JON C. LAKEY / SALISBURY POST Sisters Mary-Chapman (5) and Eleanor Reamer (7) pause while playing near their Salisbury home to try and catch some of the frozen precipitation falling form the sky.

The weather resulted in emergency declarations from elected leaders at the state, county and city of Salisbury levels. Many businesses and all schools in Rowan County closed because of the weather. County and city of Salisbury offices also closed. Roads in rural areas of the county on Friday morning remained covered in snow. Snow plows and road crews spent the morning clearing roads.

He said the winter storm system is expected to produce higher frozen rain totals in east Rowan. West Rowan could see less ice and more snow than the east, he said.

Around mid-day on Friday, forecasts show any snow shifting to frozen rain.

“We have the ability to set it up in times of significant events or event disaster for the county and it provides coordination over multiple jurisdictions,” Thomason said. “Because of this storm event, we did see the need to set it up.”

“It’s not currently staffed,” Thomason said Friday morning. “However, we;re fully set up. It’s tested and ready to be staffed if needed.”

Thomason said he isn’t aware of any serious traffic accidents resulting from weather. He said one accident occurred U.S. 52 at Sides Road. Another occurred on I-85 near Long Ferry Road, where a tractor trailer jackknifed. He said neither resulted in serious injuries.