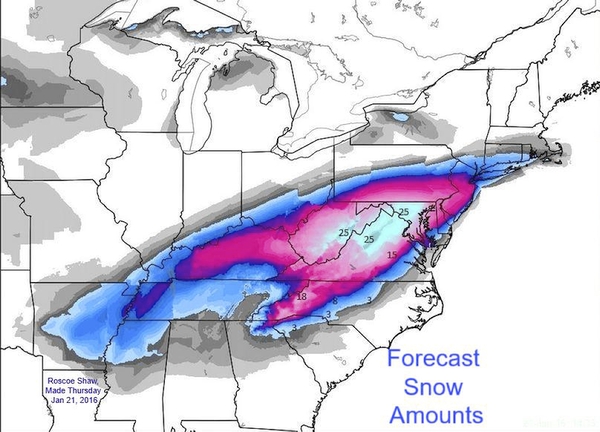 Image by Roscoe Shaw/For the Salisbury Post Salisbury native and meteorologist Roscoe Shaw sent this map with this prediction: 'Looks like snow, starting around 3 am for Salisbury, then changes to ice/slime most of day then back to snow Friday night. How much? Best guess is 8" but amounts will vary wildly along the transition zone. Easier call in Virginia where it is all snow and should dump 18" at my house.'

Steve Monday, the forecaster at Rowan County Weather, said he expected the approaching storm to start with sleet around midnight, then change over to snow around 3 a.m. Friday.

“It’s possible we see three inches of snow during this time. I expect the snow to transition to sleet and freezing rain around midday Friday.”

Monday predicts about three-tenths of an inch of ice. “This will continue through the evening hours into Saturday morning. We should see snow mix back in during the morning hours of Saturday, with an additional accumulation of around an inch before tapering off Saturday evening.

Monday puts the snow accumulation at 3 to 5 inches. For ice, expect three-tenths of an inch.

Monday looks at numerous weather models, as do other forecasters. “They’re actually sort of coming together now. Most models are very close” in their predictions.

“The only thing that I do differently than some others, when some meteorologists are offering higher amounts, I interpret it a little differently.”

Monday says warm air will stick around a longer period in the atmosphere, increasing our chance for freezing rain instead of snow.

“I anticipate we’ll see freezing rain today, for much of the day because of the warmer air aloft.” But he stretched his snow out a little longer. “I think it will be midday before it changes.”

Monday pointed out that 10 inches of snow is equivalent to one inch of water, but with the icy mix, snow totals will be lower. On a weather model, the ice can throw off the snow prediction.

With the expected winds, Monday says Rowan could be in for some serious problems such as ice-laden trees and power lines snap.

“I wish we had all sleet instead of freezing rain, it’s easer to deal with, doesn’t make a sheet of ice.”

“Some people are really hyping it up, but I’d be shocked to see more than what I can see now.”

Man robbed, assaulted at his home by acquaintance

By Shavonne Walker shavonne.walker@salisburypost.com A Salisbury man was left with a broken nose after an acquaintance robbed him and hit... read more