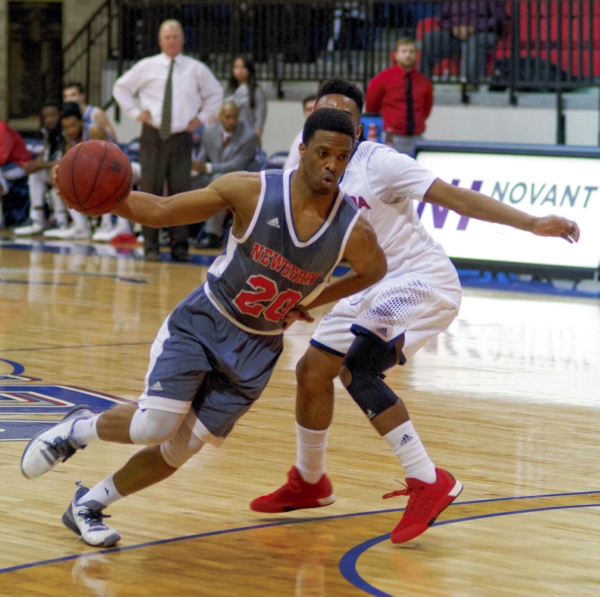 SALISBURY — Derrick “D.J.” Copeland starred at A.L. Brown High School for coach Shelwyn Klutz and earned South Piedmont Conference Player of the Year honors as a senior in a league that included Concord star Connor Burchfield.
Still, the transition to college basketball hasn’t been routine for Copeland.
“It’s been a very long road,” said Copeland, shortly after scoring 11 points to help Newberry’s Wolves win, 98-84, against Catawba at Goodman Gym on Wednesday. “I’ve been through a lot, mostly off the court.”
Copeland, a sophomore who is averaging 6.2 points per game for the Wolves, has earned the trust of Newberry coach Dave Davis.
“Our program is built around giving guys an opportunity and on finding those hidden gems that are overlooked,” Davis said. “We believe D.J. is one of those hidden gems. He can be a great player for us.”
Copeland’s stellar high school career concluded in 2013 with a 30-point effort in an 82-75 playoff loss at North Forsyth. It was a game in which North Forsyth shot free throws all night long.
The Wonders, who also had Tevin Stark, Tydus Parks and Michael Carr, nearly shared the SPC title, but they lost starter Braxton Waddell to a broken leg and dropped a fierce scrap at Concord in the final game of the regular season to fall to second place at 10-2. Then Cox Mill won the conference tournament. That’s why the Wonders (19-8) were only a No. 3 seed and had to hit the road for the first round of the 3A playoffs.
Copeland averaged 16.7 points as a senior, was all-region and surpassed 1,000 career points in his last high school game. But then the recruiting process dribbled him around a little bit. There were questions about his size. He was barely 6 feet tall and weighed about 150 pounds.
Newberry is where Copeland wanted to go, but that didn’t work out. He ended up committing to Division III Averett.
That didn’t work out, either. After arriving at Averett, Copeland was convinced he should be playing at a higher level. He wants to be pushed to get better, and he feared he wouldn’t be pushed at Averett.
He transferred to Division I Gardner-Webb. That didn’t work out, either.
“The biggest thing there was that my mom got sick and I went home to take care of her,” Copeland said.
Copeland finally resurfaced at Division II Newberry, which is where he wanted to be all along. He arrived at Newberry for the 2014-15 school year, but he red-shirted.
“It was a year for him to learn our system, but it was also a year for him to get all his grades in order,” Davis said. “He really improved as a student. He knew he wasn’t going to play for us if he didn’t.”
After a long hiatus, Copeland is finally back in action. He’s older, wiser and stronger. His body has matured. He now weighs a sturdy, thick-armed 170 pounds. A skinny kid has become a man.
Copeland made his long-awaited debut on opening night this season at Erskine. He played 19 minutes and scored seven points.
Newberry plays the same system that Davis used when he coached Pfeiffer for many years. It’s “organized chaos,” as Davis puts it. Newberry plays a lot of people, mostly over-achievers, and they compete at a frenetic pace.
“Coach Davis is a great guy off the court,” Copeland said. “But on the court, he’s all business. He expects a lot from everyone.”
Newberry leads Division II in forcing turnovers (21 per game), ranks in the top 10 in 3-point attempts, and is third nationally in scoring at 94.7 points per game.
Davis’ system is a 40-minute assault on an opponent’s nerves and stamina. Pfeiffer wants layups, free throws and open 3-pointers off drive-and-kick offense. The Wolves showed what they can do on Wednesday. At one point, they led Catawba by 35 points.
Copeland has fit right in, penetrating, getting steals, making 3-pointers and making the extra pass that Davis loves. A lot of what Newberry does is predicated on extreme unselfishness — passing up a good shot to get a teammate a great shot.
“D.J. has played a lot of different roles for us — point guard some, in the corner some, on the wing some,” Davis said. “That’s not the easiest way to break into the rotation, but we knew he could play. He’s a good defender and we are confident he’s going to be a great defender.”
Copeland said he’s learned a lot from junior point guard Gerald Evans, who has taken him under his wing.
Copeland’s effort at Catawba was his fourth double-figure outing of the season. He’s started eight games for an 11-6 team. He’s shooting a respectable 34.4 percent from 3-point range and he’s contributed 13 steals to Newberry’s massive total.
Wednesday was special for Copeland. Playing about 20 minutes from his Kannapolis roots at Catawba, his parents had a chance to watch him perform well.
“I’ve started feeling confident like I did in high school,” Copeland said. “And our team is just starting to find a groove.”

by Marny Hendrick sports@salisburypost.com SPENCER — It took the North Rowan girls almost five minutes at the beginning of the... read more