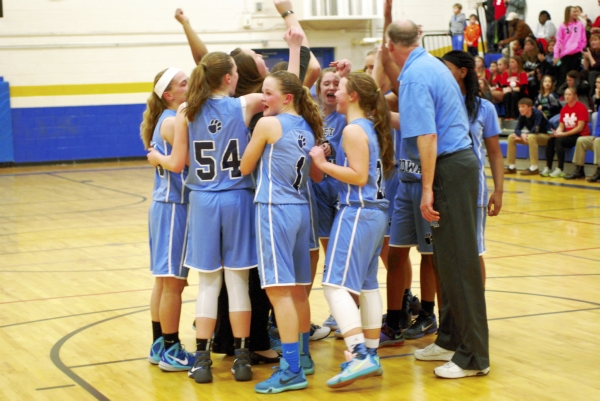 Tournament most valuable player Taylor Poole delivered the key basket for the Bulldogs, a 3-point jumper from the left wing with 45 seconds left in the game. The shot put West up, 41-39.

After a Mooresville missed shot, West’s Cindy Connolly hit a short jumper with 19 ticks remaining for a 43-39 advantage.

“We told the girls that we didn’t need to shoot, unless you’re just wide open — and Cindy was,” said West coach Katie DeAngelo. “She made the shot and it gave us a little extra breathing room.”

Mooresville’s Olivia Marshall was fouled with 9.3 seconds left and calmly sank both free throws to pull the Red Imps within two points again. But Poole, was fouled and made one of two free throws for the final margin.

Mooresville did have one last chance to tie the game, but Wilson blocked Marshall’s 3-point attempt from the deep corner.

A series of turnovers by both teams followed before Mooresville’s Adira Aboulah banked in a 3-point shot from the right side with 45 second left, giving the Red Imps a sudden one-point lead. Poole then followed with her 3-pointer.

The Bulldogs began their comeback really in the second part of the fourth quarter, following a timeout.

“They just needed a good check and to be reminded that the game was not over and to keep fighting through to the end,” said DeAngelo. “We told them that we believed they were the best team, so go play like you’re the best team.”

Last year as seventh graders, Mooresville got the best of the Bulldogs at the tournament.

“Tonight was a fight to the end and we knew it was going to be when we started the game, and really, since the start of the year,” continued DeAngelo. “This year, the girls didn’t give up on themselves and that’s the one thing that went wrong last year.”