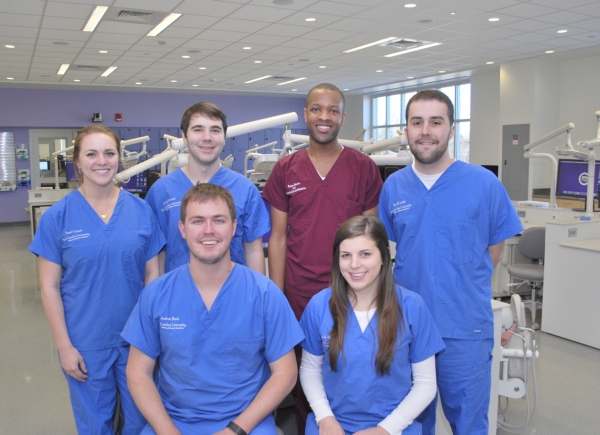 Submitted photo Rowan County is well represented in the East Carolina University School of Dental Medicine class of 2019, with five of the 53 students from Rowan. Dressed in blue, they are front row from left, Andrew Blank and Leslie Pence; and back row from left, Raven Corbett, Luke Current and Brett Leslie. Robert Barton, in red, is from Rowan and entered the program last year.

Andrew Blank is a first year student in ECU’s dental program, and says that normally counties have only one or two student representatives — but for the class of 2019, that didn’t happen.

“Of the 53 students in my class, five of them are from Rowan County, that’s insane—three of them went to my high school,” Blank said.

It seems like a small number until you consider that no students from Rowan County were admitted to the program until last year—and then it was only one.

“Going from one to five in one year is a pretty high jump,” Robert Barton said.

Barton was the first student from Rowan County to be accepted into the program, and says it’s normal to see five or more students from Mecklenburg County or Wake County in a single class, but not for rural areas. It’s nearly 10 percent of the class, Leslie Pence, a student in the 2019 class says.

“With Rowan being so much smaller, I think it was really surprising,” she said.

Peggy Novotny, School of Dental Medicine director of external affairs at ECU, says that the number doesn’t strike her as unusual — while all of its students are from North Carolina, the school simply chooses the students who are most qualified.

“We take a look at the students who are the best fit for our school,” she said.

ECU’s School of Dental Medicine has over 400 applicants each year, but only 52 or 53 are accepted. It’s a popular program, Blank says, because it’s one of the only dental programs in the state — the other main school is UNC Chapel Hill.

But ECU’s program has a different focus. Whereas a lot of dentists migrate towards cities and urban areas, ECU’s program aims to equip rural areas with practicing dentists.

That means that few areas have enough dentists to properly serve the population. Barton says that not only does ECU’s program focus on sending dentists to rural areas, but it seems to attract those students as well.

“It’s to educate dentists who would go back to undeserved areas,” Barton said.

Novotny says that while the school doesn’t specifically pull from small, rural communities, it seems like the majority of its students are from there.

“Our students have to have both the head and the heart,” she said.

The School of Dental Medicine wants its graduates to stay in North Carolina and work in undeserved areas, Novotny says, and many of its students who share that passion are from those areas.

“It really reflects positively not only our county but also on the teachers we had at East rowan,” Blank said

Barton thinks one of the reasons students from Rowan County have increased is because people see that there’s a large need for dental care in the area.

“We’re definitely not as rural or undeserved as cities in the eastern or western areas of the state . . . but there’s definitely a need,” Barton said.

The Smile Center at the Rowan County Health Department confirmed that Rowan County was recognized as an undeserved area when it comes to dental care. According to Pence, an area is undeserved when it has too few dentists, or when a significant portion of the population is unable to afford or receive dental care.

It’s a mission that really resonated with Barton, who has friends and family members unable to afford dental services.

But why are students from Rowan County choosing a career in dentistry?

“I guess it’s the experiences we’ve had with dentists in Rowan County,” Blank said.

Barton says he saw a dentist for the first time when he was 13. Even as a young teenager, he knew he wanted to go into health care, but hadn’t settled on a field. His dentist took the time to make him feel comfortable, calm his nerves, explain every procedure and stress oral health and preventative care.

For Blank, it’s the relationship. Dentists are health care professionals that many people see regularly for years of your life, and it’s easy to see when they love their job. He also likes that dentistry is hands on and has a focus on preventing problems before they start.

“It’s about using all the skills that you have to impact an individual’s life,” he said.

ECU’s dental school started in 2011 and it graduated its first class in May 2015. Since it began, the program is building Community Service Learning Centers in rural and undeserved areas. When they reach their fourth year, the students from Rowan will rotate through three of them.

Until then, they’re hard at work, and Blank and Barton, at least, have plans to return to Rowan County once they graduate. A growing population of aspiring dentists in ECU’s program may be something of a happy accident, but it’s one that the students are proud to claim, nonetheless.

“It’s a huge honor to represent our county,” Blank said.