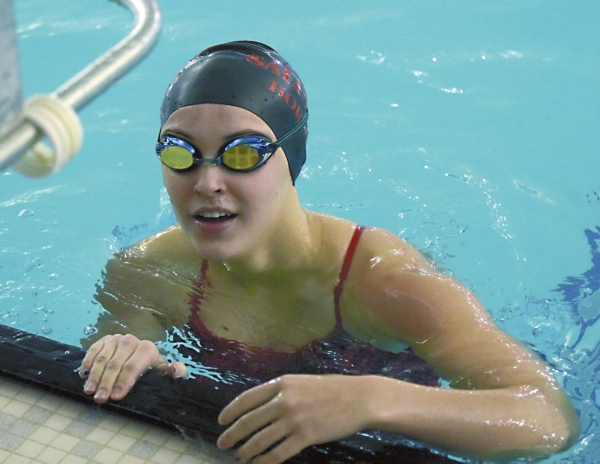 Wayne Hinshaw/for the Salisbury Post ... Salisbury’s Kathryn Morrison was the MVP of the girls county meet on Thursday at the Hurley YMCA. Above, Morrison wins the 100-yard butterfly race.

SALISBURY — Salisbury’s girls surprised even themselves at the Rowan County Swimming Championships held on Thursday at the Hurley YMCA.
Led by meet MVP Kathryn Morrison, a sophomore who also was named the meet’s top performer as a freshman, Salisbury edged Carson, 96-91, for the title.
Rounding out the team scoring were East Rowan (38), West Rowan (37), South Rowan (24) and North Rowan (12).
“I don’t think we really expected to win when we walked in here,” Salisbury standout Kathryn Morrison said. “It’s an awesome feeling. The whole team is just very excited. It means a lot to win the county.”
The Hornets frequently have elite swimmers such as Morrison, but they usually fall short against superior numbers. This time the Hornets had just enough, and the points were widely dispersed enough. Salisbury claimed its first county title since 2009.
“It can be tough for the 2A schools against the 3As, but we had some big swims, some great performances from a lot of people,” Salisbury coach Ryan Starrett said.
Carson coach Sallie Pittman pointed out that the first event of the day — the 200 medley relay — was the difference-maker. Carson had the fastest seed time, but the Hornets — Sharmi Amin, Morrison, Callie Alexander and Amelia Steinman — shaved more than four seconds off their seed time and won handily.
“When we won that first event, it got everyone excited and pumped up,” Morrison said.
Morrison won two individual events — taking the 100 backstroke and 100 butterfly — and she finished her long day by teaming with Michael Lemmon, Amin and Steinman for a breezy victory in the 400 free relay. That swim clinched victory.
Morrison said her best efforts of the day came in the 200 medley relay and the 100 butterfly, where she swam a blazing 59.31 to win by 16 seconds.
Steinman and Alexander also were huge for the Hornets. Steinman won the 50 freestyle, while Alexander won the 100 breaststroke.
Carson’s youthful Hardman sisters kept the Cougars in the running. Both won two individual events. Shea, a sophomore, won the 200 freestyle and 500 freestyle. Brynne, a freshman, won the 200 IM and 100 freestyle.
Both Hardmans were in the pool for the 200 free relay, and they combined with Taylor Sever and Olivia Shorter for another victory.
“We’re lucky to have the Hardmans,” Pittman said. “We were close today, but Salisbury just came out too strong at the start.”
Starrett said he pushed the Hornets hard in practice on Wednesday because he was looking ahead to the upcoming Central Carolina Conference Meet.
“I kind of hammered them in practice,” Starrett said. “As the meet went on today, I could see we were starting to get tired, but we pulled it out. I couldn’t be prouder of all of them.”