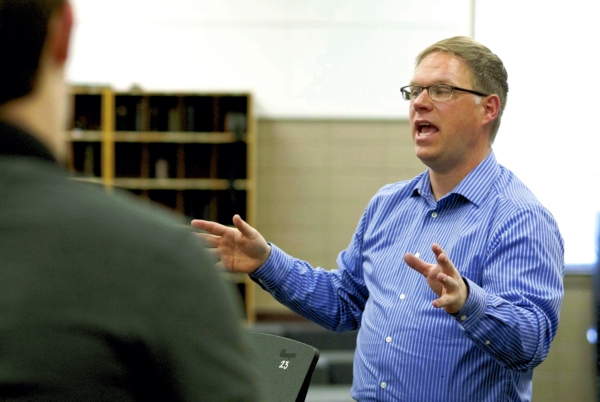 Gordon Snyder, director of instrumental music at A.L. Brown High School, works with a class of students taking an honors jazz class. Snyder has been at A.L. Brown for nine years and was recently honored with a National Music Educator of the Year award. Jon C. Lakey/Salisbury Post Gordon Snyder directs the students in his honors jazz class. Snyder says teaching students has allowed him to see music in a different way, even though he didn’t initially plan on becoming a teacher. Jon C. Lakey/Salisbury Post

KANNAPOLIS — Gordon Snyder has seen a lot of kids come through the band room in his nine years at A.L. Brown High School. Some want to hone their talents, their minds set on careers in music. Some are just passing through, focusing on a future in law or medicine.

“We were just a place they could belong,” Snyder said. “They needed someplace to be themselves and to find themselves.”

Some students don’t have a career plan, and fall in love with music. And for some, it’s been a life-changing experience. Patrick Fongemy, a junior at A.L. Brown, said in an award recommendation letter that he would have dropped out of school if not for Snyder.

“Band is the reason I get up and come to school,” He wrote, “To be clear, Mr. Snyder is the reason because he is the heart of our band program. If it was not for him there would be a void in my life and I would just be searching aimlessly for what my future could be.”

And Snyder says Fongemy is not the first student who has found a purpose and a future through band — sometimes, he says, it’s hard to remember that teaching band means more than teaching notes on a page.

“You get so bogged down in doing what you do that sometimes you forget that you’re changing lives in the process, too,” he said.

But no matter who walks through his door, Snyder has one goal — to make them love music.

“We are constantly keeping our kids involved and trying to continue to grow and develop them in just about any way they’re interested in,” he said.

Gordon runs lots of music programs at A.L. Brown, from traditional classes like marching and concert band to rock and roll, jazz rock combo, music administration and even music therapy in addition to guard ensembles and an indoor drum line.

“A lot of what I do comes and goes with the kids,” he said.

If something piques a student’s interest, he tries to make it happen — he loves to see the spark in their eyes.

“I know I’ve got a kid when they’ve been successful once,” he said, “Because after that they know they can be successful again.”

Snyder’s innovative band classes build competition and confidence in his students, prepare them for future careers in music and have earned him national recognition. Earlier this month he was named National Music Educator of the Year by Music and Arts, a national chain of music stores.

The funny thing is, he never intended to be a teacher.

“I just wanted to go out and do music,” Snyder said.

After he graduated from Liberty University in 2001, he traveled and got to know the ins and outs of the music industry — but he said he grew tired of living on the road. When friends told him about an opening at A.L. Brown for a band director, Snyder says he decided it was time for a change.

But his experience had a huge impact on the way he teaches and the way he designs his programs.

“I got a chance to see music in a different way,” he said.

The award Snyder won in early January is given to a music educator who has unique programs, inspires students and has a positive impact on the community.

When Snyder arrived at A.L. Brown, he faced some new challenges. In the 1980s, the school’s band had an average of 200 to 250 students — but when Snyder started teaching, there were only 20 students. A lot of that, he says, had to do with the closure of the mill.

“Kannapolis was dwindling down,” he said, ”and any time that occurs you see a lot of times art programming kind of shrink — even if it’s important to the community, which it is in Kannapolis.”

The only thing to do was to build. Snyder got together with some parents and constructed business plans and long-range goals for students and the program as a whole. With their help, he was able to design creative programs to lift the band, and the community, to its feet.

“I think a lot of people would say that they build their bands off their students,” he said, “I think if you don’t build it as a full support team you’re gonna end up on a stool with only one leg.”

Now, A.L. Brown’s band averages 110 to 115 students, and Snyder thinks that the program will see incredible growth in the next few years. His students play at groundbreakings and demolitions in the town, they march in parades, win competitions and travel to play in locations such as Washington, D.C.

And none of that, including his award, would have been possible without the support of the parents or the people of Kannapolis, Snyder says.

“I don’t think you can accomplish what this place is accomplishing without a full team of people behind you,” he said.

But the job has had its struggles. Snyder became the band director through lateral entry — meaning he had three years to complete necessary courses to become a certified teacher. Currently, he’s in the middle of earning his master’s degree.

Snyder also says that one of the hardest parts of his job is learning to relate to the students. A lot of teachers are tempted to separate a student’s talent from who they are as a person — but you have to teach the whole person, Snyder says.

“That’s one of my greatest challenges sometimes is just knowing the kids. Because they’re not easy to know, sometimes. The walls are up, and at the end of the day I’m still a teacher and an adult, so they don’t want to say something to me,” he said.

But Snyder uses his relationship with students to push them, to inspire them and to challenge them. He says he doesn’t like to limit his students.

Whether a student’s plans for the future involve getting a doctorate, or a career in music, or a career in teaching or no school at all, all Snyder asks is that they try.

“As they learn that they can do more, they don’t need me to try anymore, they just do it,” Snyder said, “And we try to provide them with every opportunity we can to give them the successes along the way, because that’s what’s important. And then they take those successes and work even harder to make the next success an even greater one.”