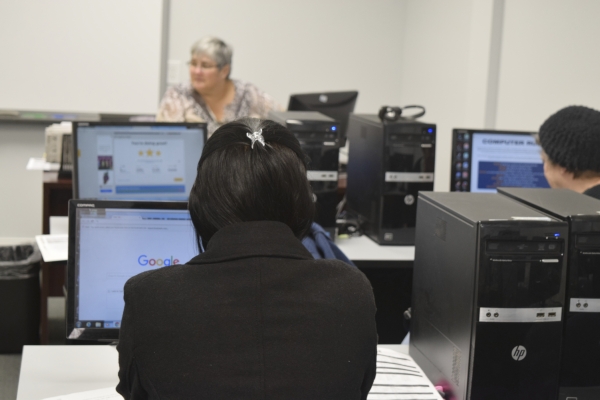 An added extension provides the center with new class and meeting rooms, and new paint, carpet, ceiling tile and signage brightens up what ceremony speakers described as once a “dark” and “ugly” space.

The Career Connections Center is a Goodwill offshoot that provides job-related services, free of charge. The South Main Street center is one of 13 in the Northwest district. Goodwill also runs a store on Jake Alexander Boulevard and oversees the Crosby Scholars, whose Salisbury office is located on North Main Street.

The center also partners with the VA Medical Center to help veterans or veterans’ families find employment and has a separate program to help those with criminal backgrounds find gainful employment.

Center Manager Rosa Adkins says that the work the center does is only possible thanks to its partnerships and the support it receives from the community.

“We share a common goal,” she said, “we could not do this without them.”

All of the resources the center provides, including free internet, are offered free of charge to those who go through orientation and a “jumpstart” program. Funding comes from sales at the Rowan County Goodwill.

The Rowan County Career Connections Center began holding classes in a back room at the Jake Alexander Goodwill, and moved into its current building nearly a decade ago, Adkins says.

Salisbury City Councilman Kenneth Hardin said in a speech during the ceremony that the center brought “hope” to the area and encouraged the center’s staff to exercise compassion.

“Compassion is key,” he said, “and that’s what I see in this room.”

The building received an expansion several years ago to add more classrooms, and last fall they felt the need to expand again, adding several new classrooms, a meeting room and a break room.

While renovations finished up in late 2015, the center is just now holding its grand re-opening. Classes have already resumed, and Adkins said that there’s “a lot going on.” The center also partners with the Crosby Scholars and NCWorks.

“We just do what we can to help others,” Adkins said.