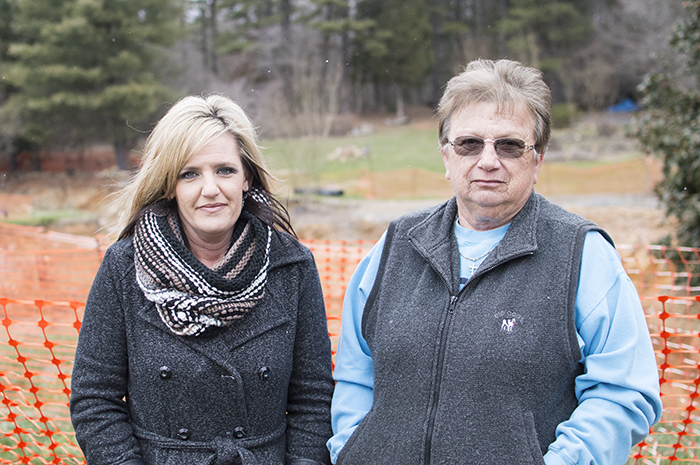 Josh Bergeron / Salisbury Post - Heather Helms, left, and Sheilia Shepherd, right, have been forced from their homes on Bringle Ferry Road as a result of a fatal tanker truck spill nine months ago. Shepherd is also the plaintiff in a lawsuit related to the spill.

Helms, who rented a house owned by Shepherd, was in the midst of her morning routine. It was 6:42 a.m. on April 2, 2015. She was preparing for cosmetology school. Shepherd was still asleep in her house, a short distance from where the accident occurred and several hundred yards away from where Helms lived.

Without warning, a thunderous sound startled both of them. A tanker truck carrying thousands of pounds of ethanol on Bringle Ferry Road flipped onto its side. The accident claimed the life of the truck’s driver — James Sechler — and forever changed Helms’ and Shepherd’s lives.

Helms recalls looking out of her house to see ethanol gushing out of the tanker truck.

Both women were evacuated immediately after the accident.

Nine months later, neither Helms nor Shepherd are able to permanently return home. A 600-foot-long ravine splits Shepherd’s yard. When it rains, both women claim, there’s a noticeable smell of ethanol, and well water on the property is contaminated.

Both women say they’d just like to go back to a normal life.

The tanker truck spill and its effects have resulted in a lawsuit against companies allegedly involved in the accident.

The court filing requests a jury trial and a minimum of $25,000 be awarded in damages. It also asks a judge to issue an injunction, ordering defendants to stop driving overloaded tanker trucks on Bringle Ferry Road, end further contamination-producing activities and clean up existing environmental contamination.

In this court filing, attorney Mona Lisa Wallace alleged Eco-Energy Transportation, among other things, was transporting an overweight truckload of ethanol. J.T. Russell and Sons allegedly failed to erect proper warning signs about ongoing construction or paint road markings, according to Wallace’s filing. Hepaco allegedly failed to properly cleanup ethanol and other chemicals from the spill, according to the court filing.

“As the complaint alleges, Ms. Shepherd was forced to leave her life-long residence because of the contamination and has still not returned to live there,” Wallace said in a prepared statement. “The chemicals polluted her property, her well-water, the roadway, and a large ravine has been dug in her yard.”

The spill occurred when Sechler, an employee of Eco-Energy Transportation, lost control of his truck weighing an estimated 79,683 pounds. In the filing, Wallace alleges Sechler crossed a Yadkin River bridge with a 78,000-pound weight limit. She also states Eco-Energy failed to provide Sechler proper instruction, supervision and training.

In the court filing, Wallace estimates 4,000 gallons of ethanol spilled onto Bringle Ferry Road and adjacent property during the spill.

The defendants dug a ravine after the incident in an effort to control the ethanol spill, according to the court filing. The ravine is estimated to be 600 feet long, 70 feet wide in some places and a maximum of 10 feet deep.

The ravine starts at Bringle Ferry Road, where the truck flipped on its side, and continues along the entire length of the property, which Shepherd owns. It forms a pond at the back of the property. Shepherd said neither the pond nor the ravine existed before accident. When it rains heavily, she said, the ravine flows like a river.

The ravine runs through a spot where a garage, built by Shepherd’s father, once sat. She said Hepaco demolished the garage as part of its cleanup work.

“Everything is totally different than before the accident,” Shepherd said.

“There have been visible swarms of mosquitoes since the incident and since the ravine was created,” Wallace states in the complaint. “The ravine deprives Plaintiff Ms. Shepherd from the use of her property as she has become accustomed over the last thirty-plus years.”

DEQ spokesman Jamie Kritzer was unable to provide a full copy of the notice by Wednesday afternoon. However, Kritzer confirmed the notice was issued. He said it ordered the ethanol spill to be cleaned. DEQ also ordered the property to be restored to its condition before the tanker truck spill.

Despite the state order, Shepherd and Helms said clean-up crews haven’t returned to the house in months. The company stopped working in June. It left the ravine, traces of ethanol and barriers on the edge of the ravine.

For now, Helms and Shepherd are staying at a house that Helms was preparing to sell when the accident occurred. They both stayed in a motel for more than a week.

Helms was also forced to relocate her business from her residence on Bringle Ferry Road.

Shepherd and Helms said they were optimistic at first that the the spill would be cleaned up, and the ravine would be filled.

“It turned out to just be a bunch of empty promises,” Helms said.