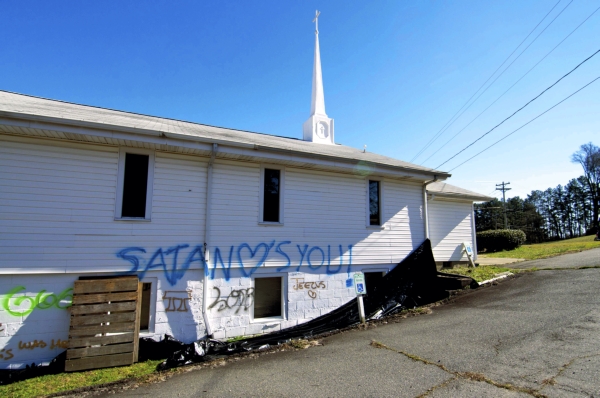 The side of Living Word Spirited Baptist Church still bore the work Tuesday of vandals who spray-painted anti-Christian graffiti on this church and St. Enoch Lutheran Church over the weekend. Jon C. Lakey/Salisbury Post Pressure washers removed almost all of the painted graffiti from the sidewalk behind the fellowship hall at St. Enoch Lutheran Church. Jon C. Lakey/Salisbury Post

Two southern Rowan County congregations are choosing forgiveness after they woke up Sunday morning to find some unwanted decorations.

St. Enoch Lutheran Church and Living Word Spirited Baptist Church both reported that sometime Saturday night or early Sunday morning someone took a can of spray paint to the side of church buildings, scrawling obscenities, swastikas and upside down crosses on the brick.

“You just don’t think that anyone’s going to do something like that to a church,” the Rev. Rodney Boone of Living Word Spirited Baptist Church in Kannapolis said.

According to a press release from the Rowan County Sheriff’s Office, Living Word discovered the vandalism when a deacon arrived at the church early Sunday morning to turn the heat up for that day’s service.

Boone says he’s been a pastor for 20 years, and has faced adversity before — but never anything like this.

“It’s difficult to grasp it all at one time,” he said.

St. Enoch Lutheran on Campbell Avenue in Enochville is no stranger to adversity, either. In September of last year the church discovered that a group of teens had kicked over, broken or defaced more than 30 tombstones in the church’s historic cemetery. The suspects, a group of minors, were charged, and the church installed security cameras.

But it hasn’t stopped the problem.

All of the vandalism at St. Enoch Lutheran occurred to the church’s fellowship hall, behind the main building. The Rev. Dale Cline said that in addition to swastikas, 666, KKK and upside down crosses on the windows, the vandal or vandals left other messages.

“They wrote all sort of strange things,” he said. “Actually, it was little bit laughable.”

Other messages included: “remember Satan loves you,” a “psalm tree” and “there is no God” in flawless German.

The Sheriff’s Office estimated that it was about $500 in damage, Cline said.

The church has already cleaned off the graffiti, taking razors to the windows and paint lifters and a pressure washer to the brick and concrete — all that’s left are vague imprints staining the sidewalk.

Cline expressed concern for the youth of Enochville. He says that when he faced the previous group of vandals in court, he offered the group, and their families, any assistance the church could provide. He says he’s making the same offer to whomever chose to target St. Enoch this weekend.

Boone says that he and his congregation are also choosing forgiveness, but that he feels divided. The church reported it because they wanted the wrong brought to light, and Boone says that soon he’ll face a choice: whether to press or drop charges.

Boone believes the vandal is likely a young teenager, and expressed concern for his or her well being.

“If this is a 15-year-old kid, where are his parents? Why is he out roaming the street at night?” he wondered.

But whoever they are, Boone says he wants them to know that the church feels no bitterness.

Living Word Spirited Baptist Church has been in the Kannapolis-Enochville community for 12 years, Boone says. In that time they’ve reached out, fed the homeless, run a food pantry and tried to do what they can to be there for the people of the area — and they don’t plan to stop.

“They tried to destroy the outside, but they can’t touch the inside — that’s where our heart’s at,” he said.

The white walls of Living Word still bear the scars of the crime. The church propped boards against the brick and covered the worst with plastic sheeting, but there’s still a lot of work to be done. The insurance company hasn’t been out for an official look at the vandal’s handiwork yet, but Boone estimates that it would cost the church nearly $1,000 in materials to remove the spray paint.

Boone says he thinks that the incident has brought his congregation, and the community, closer together. As he and his flock pick up the pieces and try to figure out how to remove the explicatives from the white brick and vinyl siding, he says they’ve received numerous offers of help and words of support and encouragement from the community.

The Rowan County Sheriff’s Office said in a news release that the crimes appear to have been committed by the same person or group.

The Path to Lincoln School: Evans remembered fondly in place he always talked about