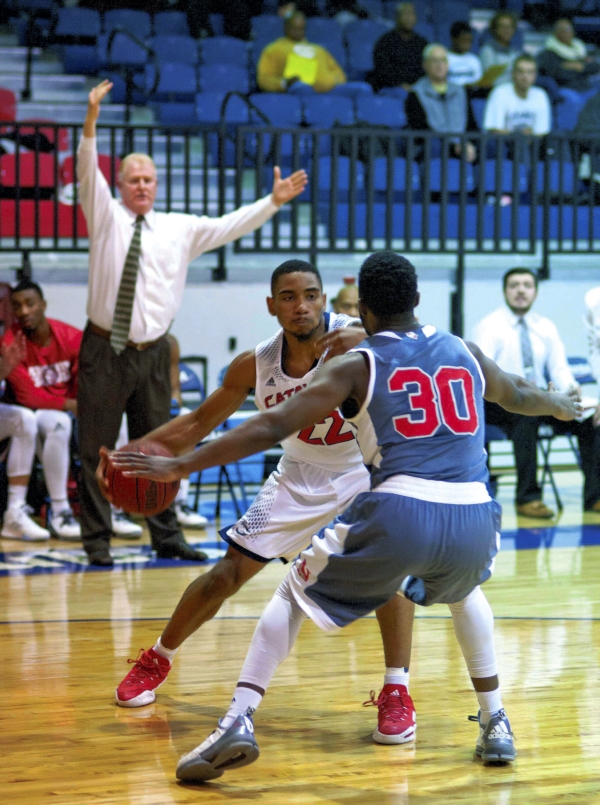 SALISBURY — The teams came in tied in the South Atlantic Conference standings, but Newberry led Catawba by as many as 35 points, and easily beat the Indians, 98-84, on Wednesday night.
Jerrin Morrison had 29 points and 12 rebounds and saved Catawba from a defeat of epic proportions.
Newberry (11-6, 6-5) led all the way. The Wolves buried 17 3-pointers, put six men in double figures and forced the frantic, organized-chaos style of play that is their trademark.
“For the first 33 minutes, this was one of our best games of the season,” Newberry coach Dave Davis said. “Earlier in the season, we were playing good offense or we were playing good defense, but not both. Our last two games have been complete efforts. We shared the ball. We played with a lot of focus on defense.”
Catawba dropped its third straight game. All three losses have come at home at Goodman Gym. The realistic goal for the Indians (7-10, 5-6) is now a modest one. Namely, finishing in the top eight in the 12-team league and qualifying for the conference tournament.
Newberry dominated the first half so thoroughly that Catawba shot a torrid 58.8 percent in the second half and still never threatened to make it a ball game.
Catawba suffered through another awful start. Newberry led, 10-0, after three minutes.
“You can’t win a game in those opening minutes, but you can lose it,” Catawba coach Rob Perron said. “We had a lot of offensive rebounds go off our hands early, and that hurt us as much as anything. We’ve used a lot of different starting lineups, but we’ve got to find one that can start stronger. We can’t keep getting behind 13-2.”
It was 22-6 after 10 minutes and becomingly increasingly clear that it wouldn’t be a good night to be a Catawba fan.
“We’ve got so many different styles in our league, and Newberry might have the most unique system and the most unique style,” Perron said. “They play a lot of guys, they’re very unselfish, and their biggest skill is simply that they play extremely hard,”
By halftime, Catawba had turned the ball over 13 times, relentless Newberry had made 10 3-pointers, and the visitors led, 53-29. Jameel Taylor, Catawba’s leading scorer, had a really tough first half. He went 1-for-7 with three in-and-outs.
Newberry didn’t let up any at the start of the second half. When James Ashby made a 3-pointer with 11:47 remaining, the Wolves led, 79-44, and things were threatening to get completely out of hand.
“We were really playing well,” Davis said. “The thing we’ve got this year that we haven’t had since I’ve been at Newberry, is a senior class. We’ve got a lot of guys who have been through it, a lot of guys who know the system They can help the young guys.”
Catawba actually had a superb offensive second half, combining sizzling shooting with only five turnovers. The Indians finished strong, got within 20 points at the 3:45 mark on a Rakeen Brown layup, and made it a respectable, 14-point final margin with two late 3-pointers by Ben Sealey.
“We were disappointed with the way we finished,” Davis said. “But in this league every road win is a fantastic win. Even a one-point road win is fantastic.”
•••
Morrison shot 11-for-21 from the floor and made three 3-pointers. Taylor bounced back from that rough opening half to finish with 14 points and seven rebounds. Rakeen Brown had 12 points and five steals. Troy Warren had six rebounds and blocked two shots… A.L. Brown graduate D.J. Copeland was on the floor 22 minutes for Newberry, made two 3-pointers and scored 11 points. Veteran Mitch Riggs led Newberry with 19… Davis is like a big brother to Perron, who coached under him at Pfeiffer and Newberry. … Catawba plays at Tusculum on Saturday.