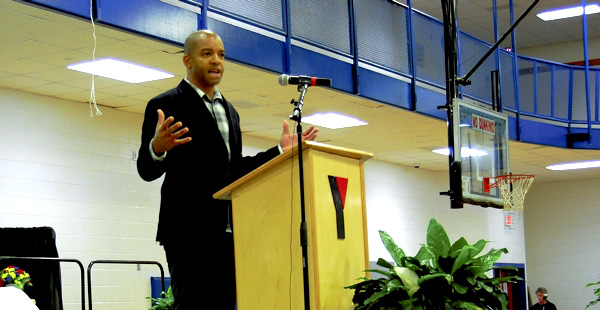 “As long as I have breath, I have something to give,” Byron McMillan, director of content training at Jobs for Life, told a crowd of more than 500 people on Monday.

McMillan was the keynote speaker for the 30th Annual Martin Luther King, Jr. breakfast at the J.F. Hurley YMCA on Monday.

The Rev. Clarence Shuford was the master of ceremonies for the breakfast.

Candace Johnson, chairperson for the MLK Committee of the Human Relations Council, said they were prepared for 600 people, and almost that many attended.

Among the attendees were elected officials, police and fire department members and clergy members.

Community members winded through a breakfast lineup of all the favorites, including eggs, bacon, fruit, muffins and biscuits.

Meg Ham, president of Food Lion, was the one of the first speakers to greet the audience.

“We are the towns and cities that we serve, and we cherish the opportunity to give back to our communities,” she said.

Alexander acknowledged how far society has come since Dr. King’s death, and how far it has yet to go.

“Great innovation in education, medicine and technology have propelled our cities, nation and world into the 21st century, and yet we, as humankind, are still so far from solving the problems of poverty, violence and racism around the world,” she said.

Edds talked about the charge to ensure the freedoms of every citizen in the county.

“As chairmen of our county’s board of commissioners, I speak clearly for every commissioner when I say that we must do all in our power to be sure that the promises of fairness and hope and encouragement and opportunity and respect and freedom are delivered to every citizen in this county,” he said, “not because it is safe or political or popular, but because it is right.”

Continuing with the “In Service” theme, McMillan spoke about the value of service and using gifts and talents to help others.

“I know that many of you might be saying, ‘Who am I to help somebody to get out of their nightmare? Who am I? It’s just little old me.’ Well, I’m here to tell you this morning that there’s no such thing as little old me,” he said.

In addition to his work with Jobs for Life, McMillan is also the president and founder of the Red Clay Network in Raleigh. He graduated from East Carolina University and served as an armor officer in the United States Army. While in the army, he was awarded the Bronze Star for leadership in combat during Operation Desert Storm.

McMillan’s speech was an interactive one. He had the audience write down some of their talents and what they loved to do on different colored index cards that were on the tables. The cards were collected and taped up to a back wall.

McMillan said people should figure out how they can use their gifts to solve societal problems.

“Everything we need is already here in each one of you,” he said.

The event ended with the audience singing “Lift Every Voice” and a benediction from Shuford.

Johnson commended the volunteers who helped throughout the weekend and said all of the events were a success.

“I just think that it’s a phenomenal weekend where we can, as a community, come together and celebrate,” she said.

By David Freeze For the Salisbury Post Dorothy Safriet Poole buys her gas at Mault Brothers Service Station near the... read more