The Path to Lincoln School: Evans remembered fondly in place he always talked about 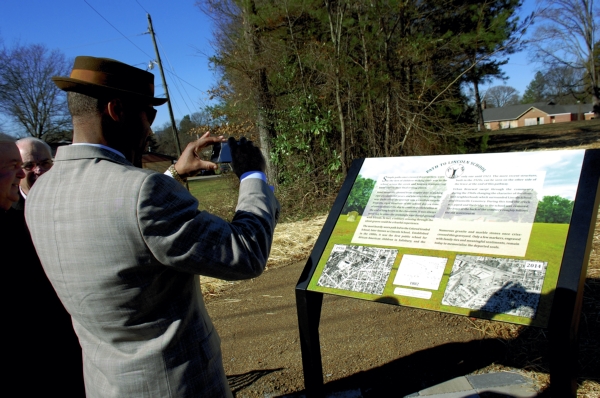 Tim Walker takes a photograph of the new sign at Dixonville Cemetery describing 'The Path to Lincoln School' before ceremonies Monday morning that dedicated the sign and paid tribute to the late Freddie 'Jake' Evans, original chairman of the Dixonville-Lincoln Memorial Project Task Force. Part of the old Lincoln School can be seen in the background. Mark Wineka/Salisbury Post

The new sign, titled “The Path to Lincoln School,” notes how children in the old Dixonville community on the eastern edge of Salisbury used to cut through the cemetery so frequently on their way to and from Lincoln School that they wore several paths.

Using old images, the city has re-created with pit gravel more than 800 feet of those paths, meandering through the cemetery to the old school.

But the real reason so many people showed up for the dedication of a sign was to pay tribute to the late Freddie “Jake” Evans, the original chairman of the Dixonville-Lincoln Memorial Project Task Force.

The sign was dedicated in his memory. Former Mayor Paul Woodson and current Mayor Karen Alexander read together a city resolution in honor of Evans before handing an official version over to Evans’ widow, Raemi. A luncheon then folowed at nearby First Calvary Baptist Church where members of the Evans family were guests of honor.

During the luncheon, Fred’s daughter, Janine Evans, thanked former Salisbury Mayor Susan Kluttz for having the vision to bring honor to the city by establishing the Dixonville-Lincoln Memorial Project Task Force.

She also thanked Woodson for moving the project along and gave special credit to Emily Perry, the task force’s new chairperson, for seeking his advice and keeping him updated in his last months.

“She definitely knew how important this project was to my father,” Janine Evans said.

The daughter said “Dixonville” will always resonate in her mind because of what it meant to Fred Evans.

“I always heard him talk about Dixonville,” Janine said. His stories about the community, which essentially vanished with urban renewal, told of hardship, but there also was a lot of humor, Janine Evans said.

Fred Evans had strong feelings of pride, unity and community which came from Dixonville, and these were things he wanted to keep going in Salisbury as a whole —”that we all live together as a community,” Janine said.

Earlier at the sign dedication, Perry said Evans was an awesome father, coach, teacher, counselor and principal. “He loved Salisbury, but he loved Dixonville, too,” Perry said.

During integration, Evans became the first African-American assistant principal at the formerly all-white Boyden High School, whose name changed to Salisbury High in 1971.

Evans earned a master’s degree in school administration from Appalachian State University in 1976  after having graduated from J.C. Price High in 1957 and N.C. A&T University in 1961.

Until integration, he was a social studies teacher and assistant principal at Price High, where he also was the head basketball coach and a football coach.

Later for Salisbury City Schools, he served as director of transportation and student activities.

Evans displayed boundless energy on community initiatives. He was  a board member or leader for organizations such as the Red Cross, Boy Scouts, the Housing Authority, YMCA, Optimist Club, Rowan-Salisbury Sports Hall of Fame, Jaycees, United Way and Optimists.

Alexander described him as a  special and significant citizen, a light to future generations.

The ongoing discussion about a suitable memorial for Dixonville Cemetery — the first city-owned cemetery for African-Americans — and Lincoln School especially intrigued Evans.

Alexander encouraged those in attendance Monday morning to read the first paragraph of “The Path to Lincoln School” sign.

It says, “Simple paths once crossed this cemetery, worn by the feet of children making their way to the school across the creek and hearses transporting loved ones to their final resting places.”

The children walked by persimmons and pear trees and could pick blackberries along some of the paths. The heaviest traveled path led to what was first called the Colored Graded School, later known as Lincoln School.

The school was established in the 1880s and was Salisbury’s first public school for African-American children and the only one until 1923. The more recent structure still called Lincoln School was built in the 1920s. It is vacant and boarded up.

In the 1960s, the creek dividing the cemetery and school was piped, and the bridge to the school was removed. A fence at the back of the cemetery roughly follows the path of the old creek.