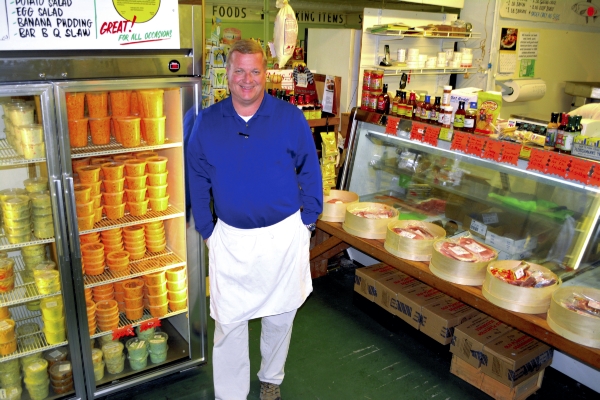 In 2019, Conrad & Hinkle will celebrate its 100th year. Lee Hinkle attributes that milestone to its pimento cheese. Photo by Susan Shinn, for the Salisbury Post.

LEXINGTON — About 16 years ago, Lee Hinkle had a dilemma.

He and brother Jim — Lee calls him Jimbo — had discussed selling their Conrad & Hinkle pimento cheese in places other than their store on the square in Lexington.

But Lee just wasn’t sure.

“We were afraid if people would buy it somewhere else in Lexington, they wouldn’t come to our store,” says Lee, now 53.

Finally, he took some to Smiley’s, a convenience store near the High Rock Lake home he shares with his wife and son. It’s 15 miles away from the store.

One day soon after, a customer came in the store.

Hmmm, Lee thought. He had just quadrupled his sales with one customer. He decided to rethink that whole pimento cheese thing.

These days, Lee drives an 80-mile route every Thursday, delivering pimento cheese to other locations in Lexington, as well as to Rowan, Cabarrus and Iredell counties. Locally, you can find Conrad & Hinkle pimento cheese at Variety Produce in Rockwell, Father & Son Produce on Sherrills Ford Road at N.C. 150, McLaughlin’s Produce in Mooresville, Farm Fresh in Kannapolis and The Stock Market in Concord.

In Rowan County, it can be found side by side with McCombs and Co.’s pimento cheese. Which suits Lee just fine.

“I like the idea of more pimento cheese,” he says. “The more people who are aware of it, the more likelihood we’ll all benefit.”

You can pick up McCombs pimento cheese at Father & Son and Variety Produce, as well as A&L Mini Mart in Faith, Patterson’s Produce in Granite Quarry, Simply Good in Downtown Salisbury and Tamarac Marina. It’s also sold at the Farmers Market and Blackberry Festival.

Lee takes care to spread out his routes — so to speak — so the stores don’t compete with one another.

He shares the secret of his pimento cheese, which is really no secret at all.

“We use quality products,” he says. “Quality cheese, quality mayonnaise and high-grade pimento.”

And he pretty much makes it the same way his grandmother Florence Hinkle did when the store first started carrying it in the 1930s.

The store was started by his grandfather, Odell Hinkle, and step-great-grandfather, Walter Conrad, in 1919, although Walter sold out in 1927. Odell saw no reason to change the sign. His dad, the late Dwight Hinkle, a former mayor of Lexington, also worked there for years.

Lee believes pimento cheese developed during the Depression — folks were trying to stretch things as much as possible, and that included food.

Before they started selling the pimento cheese at other locations, people would come up to Lee everywhere he went — the gas station, restaurants, Belk —and ask, “You got any pimento cheese on you?”

Lee bought out Jim about five years ago. Today, Mike Anthony makes all the pimento cheese. A 50-pound tub represents one “run.” Back in the 1980s, Lee says, they’d make a half-dozen runs or so a week. A decade later, that number doubled. Today, they make six to eight runs a day.

The regular pimento cheese outsells the hot variety — made with jalapeño peppers and pepper jack cheese — about 7 to 1.

By late spring, Lee plans to open a 900-square foot industrial kitchen, in the building right next to Conrad & Hinkle. The timing is right.

“That’s when my pimento cheese season really picks up,” he says.

Delivery days are long days for Lee, because he gets up at 5 to go pick up produce in Winston-Salem for the store. He loads up the pimento cheese and leaves by noon, returning home around 8:30 p.m.

“I only sell to independent grocery stores, just like me,” he says.

And they love to see him pull up in that white van.

Lee’s wife Ashley is a teacher, and their son, John, is an eighth-grader at Central Davidson Middle School. Last summer, John started working at Conrad & Hinkle part-time when school was out.

“I don’t push it on him at all,” Lee says, “and after all, I’m not going anywhere for awhile.”

When he’s not at the store or in his van, you’ll most likely find Lee fishing or boating, or running Bonnie, a 6-month-old blond Lab.

ROCKWELL — It still seems to happen every week, whether she’s filling up her car with gas or walking down... read more