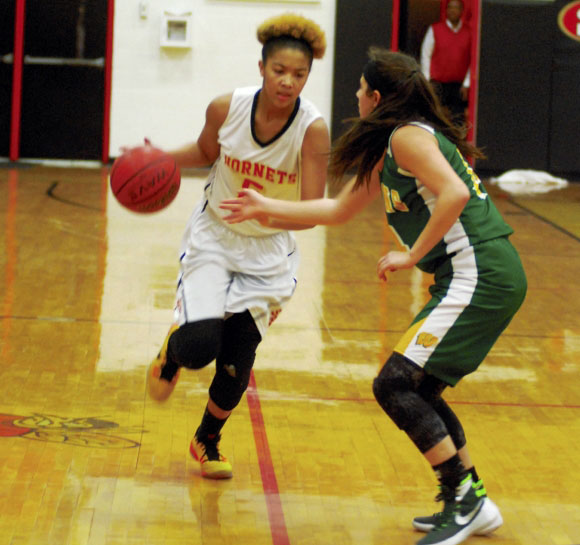 Salisbury used a 17-4 second quarter to gain a comfortable margin for most of the game. The Hornets even led by 15 points at 51-36, when Mystjkal Phifer scored a layup with 3:10 remaining in the game.

But that’s exactly when Salisbury’s youth showed up, taking its foot off the gas and allowing West Davidson some hope.

Poor ball-handling led to turnovers and easy baskets for the Dragons and behind five straight points from West’s Makayla Sink and four more from Olivia Sharpe, it was an all-of-a-sudden 54-48 game with a minute to go.

“I hate saying this all of the time, but we’re so inexperienced,” said Salisbury coach Lakai Brice. “Sometimes, they just start looking at the scoreboard and seeing a big lead, just stop playing. You’ve got to keep playing and we need a leader on the court to keep pushing this young team to finish the game.”

Brianna Troutman, even though just a freshman, may have started the process of becoming the leader as she did finish things off for Salisbury.

After West trimmed the lead to 54-50 with 50 seconds left, Troutman sank two free throws with 38 ticks remaining, for two of her game-high 23 points. Troutman then stole the ball on the other end and dropped in a break-away layup to make it 58-50 at the 24-second mark. The Dragons were done at that point.

“We finally came up with a couple of stops at the end,” added Brice, “and Troutman came up huge for us. I was proud of her on those free throws (with 38 seconds left) because she’s been coming into the gym for extra free-throw practice and it paid off for her. She’s putting the work in and is going to be an awesome player.”

In Salisbury’s defense, junior guard Tyzarea Alexander was sitting out her one-game suspension after being ejected from a game against Lexington on Jan. 8. Due to exams early last week and Friday’s game at Thomasville being postponed, this was Alexander’s first opportunity to sit.

The Hornets missed Alexander’s leadership, but Troutman and Capito more than made up for the scoring part of her absence. Capito, just a sophomore, nailed four 3-point baskets, one in each quarter, and finished with 19 points.

Troutman had three 3-pointers for the game and seven points in the fourth period. Mariah Glenn was also active defensively with some key steals and added 12 points of her own.

“It was good win, but we got a little comfortable and let a good lead get away,” said Troutman. “But we held on and this will help us build our confidence.”

Mary Nebrich led the Dragons with 13 points, while Sink and Sharpe contributed 11 points each.