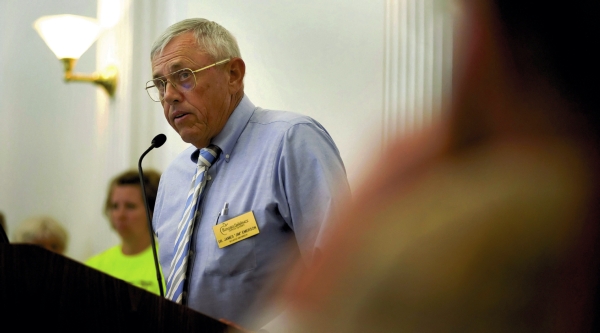 Jon C. Lakey / Salisbury Post file photo On June 7, 2010, Dr. Jim Emerson, chairman of the Rowan-Salisbury Board of Education, speaks during a public hearing on the county budget. Emerson died Saturday after complications from heart surgery.

For Judy Grissom, Jim Emerson was a stabling force when the waters were a little rough.

For Kay Wright Norman, Emerson was a person to discuss issues with without worrying about if they would still be friends after the conversation.

For Bryce Beard, Emerson was not only a golf buddy, but a model for a hard-working, caring and strong individual.

Emerson touched many lives in the educational system and beyond during his lifetime.

According to an obituary, James Willard Emerson, 76, of Salisbury passed away from complications after heart surgery on Jan. 16 at Duke Medical Center in Durham.

Emerson was born in Salisbury in 1939 and graduated from Boyden High School in 1957, according to his obituary. He earned a biology degree from Catawba College and a master’s degree from Appalachian State University. He earned a Doctorate in Education from the University of North Carolina at Chapel Hill and also attended many engineering, chemical and leadership schools.

Emerson also had a distinguished military career. He served 44 years in the Army National Guard and United States Army.

Emerson’s 31-year career in education included being a middle school science teacher and principal of Sterling Elementary School and Olympic High School. He was also an area superintendent in the Charlotte-Mecklenburg School System before retiring. His many accolades included recognition as one of the 60 most effective principals in the nation at the senior high level.

Emerson continued his educational career after retirement by serving eight years as a member and later chairman of the Rowan-Salisbury Board of Education.

Judy Grissom, former superintendent of the Rowan-Salisbury School System, said she “thoroughly enjoyed” working with Emerson during his time with the board.

“He was always there for me during times that were a little rough and he would always be there and cheer me up,” she said.

Grissom said Emerson was a stabling influence when the board had to deal with financial issues, trying to get a new central office and difficult county commissioners.

Kay Wright Norman, who served on the Board of Education with Emerson, said he was a scholarly man who was willing to hear her opinion on issues like race, poverty and education’s role in all of it.

“It’s wonderful to have a board chair that you can sit and talk with, who you don’t always have to agree with but you can dialogue,” she said.

Bryce Beard, who also served with Emerson on the Board of Education, said he was the type of person who genuinely wanted to help people.

“He would try to figure out what was the best situation for all, rather than a little group here or there,” he said.

It wasn’t all work with Emerson. Grissom said she shared a lot of laughs with him and used to poke fun at his reading habits, which included reading by the train tracks.

“’The History of Paper’ was one he was always trying to get me to read. I never wanted to read about the history of paper,” Grissom recalled.

A funny moment Wright remembers was when she and Emerson met for lunch one day. Emerson said he thought he would have had time to take a shower after the round of golf he played earlier, but he didn’t.

“He said he needed to sit a little farther away from me,” she said, laughing.

They all described Emerson as intelligent, funny, strong and friendly.

“It’s very, very saddening. He was such a great person,” Grissom said.

Visitation for Emerson will take place at Summersett Funeral Home from 6 to 8 p.m. on Jan. 19. He will have a military burial at the Historic National Cemetery at 10 a.m. on Jan. 20, followed by a memorial service at St. John’s Lutheran Church at 200 W. Innes St. The family will host friends after the service at the church’s Peeler Hall.