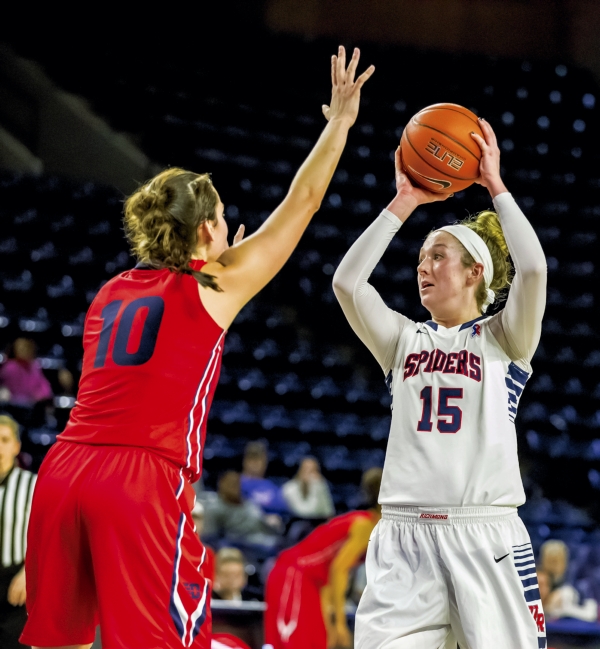 Division I basketball is often more grind than glamour.
Richmond sophomore Karleigh Wike can tell you about that.
On Wednesday night, Richmond’s women’s basketball team lost to St. Joseph’s in Philadelphia. The bus ride back to the Richmond campus didn’t end until nearly 2 a.m. on Thursday morning.
“The first of my three classes on Thursday was at 9, and I got up and did homework before that,” Wike said. “With practice and weighlifting after class, it can become a pretty long day.”
The 6-foot-4 Wike believes those daunting, demanding days are worth it.
Travel, practice, weightlifting and games make D-I basketball a full-time job, but Wike is certain the hoops scholarship she earned to a prestigious academic school will lead to a meaningful degree — and to law school after graduation.
“So far, I’ve been able to keep my grades up,” Wike said.
Wike was one of the best players in East Rowan history — All-State as a senior in 2014, with career totals of 1,170 points, 1,291 rebounds and 477 blocked shots.
But she started over at Richmond. She had to prove herself all over again against players as tall or taller than she is.
As a freshman, homesickness set Wike back. A shoulder injury that eventually required surgery set her back. She also was playing behind two senior post players, and she was shocked in practice every day by how much stronger they were.
She played in 26 games as a freshman, averaging about seven minutes per game. She scored 28 points and contributed 27 rebounds.
“It was a growing year,” Wike said.
Counted on for a lot more by Richmond coach Michael Shafer this season, Wike began her sophomore year stronger and healthier. She earned a spot in the starting lineup opening night, although she didn’t impact the stat sheet right away.
“I was just existing on the court in those early games, concentrating on defense,” Wike said. “I’d hit a little slump. I wasn’t playing like I could.”
After seven straight quiet performances as a starter, Wike was moved to a reserve role. A year earlier that change might have deflated her. This time it was a spur to put in more work instead of stoically accepting her demotion.
“I put in a lot of extra time after practice, trying to get better at a lot of little things,” Wike said.
In the last of her three games as a reserve she produced seven points and six rebounds at Appalachian State. It was her best game of the season to that point, but the 73-59 loss to the Mountaineers probably was the team’s worst effort.
“That was a bad loss for us in a game we hadn’t expected to lose,” Wike said. “We went from Appalachian to Wake Forest. Before we played Wake, we ran 200 sprints in practice because of how badly we’d played.”
Wike got a second chance to be a starter against Wake Forest. She didn’t shoot well, but she was aggressive on offense, she played fierce defense and she pulled down eight rebounds.
“The Wake game was a turning point for me,” Wike said. “I’m not an aggressive person by nature, but I knew I needed to play more aggressively and I needed to do more to help the team. I challenged myself to be a tougher player.”
That Wake Forest game was on Dec. 20.
Richmond didn’t play again until it faced Lafayette in the opening round of a four-team Christmas tournament hosted by Virginia on Dec. 28. Wike had her first college double-double against Lafayette with career highs in points (11) and rebounds (12).
Richmond lost by 20 points to Virginia in the tournament championship game, but Wike did OK – six points and six rebounds. Shortly after that game, she heard her name called out as one of the two Spiders who made the all-tournament team.
“I was a little bit shocked and I was trying hard not to smile too big because you shouldn’t be happy after your team loses,” Wike said. “But I know I was smiling a little bit. It meant a lot. It was the first time I’d ever been recognized for any kind of accolade in college. It made me realize that the extra work I’d put in had led to some success.”
Wike has contributed significantly in every game since her season turned around on that North Carolina road trip.
“I’ve been scoring more,” Wike said. “A lot of points have been on offensive rebounds. I’ve also gotten better at moving to an open spot on the floor when our guards drive and the person guarding me goes to help.”
Wike’s season averages — 4.2 points and 5.2 rebounds — are still modest because of her slow start, but she’s averaged 6.6 points and 8.0 rebounds in her last nine games. And now she’s usually on the floor for at least 30 minutes.
She had 10 points and nine rebounds against La Salle. Then she had 10 points and seven rebounds against Rhode Island.
She was proud of how she played against Dayton, an elite eight team from a year ago. Dayton has powerful 6-6 and 6-5 senior post players, but Wike’s defense helped Richmond stay in the game with the Flyers.
“I’m more confident now,” Wike said. “I take a theatre class, and I guess that helps your confidence just being able to stand up in front of people. I think every athlete gets tired at times and homesick at times, but going to school so far away from home has really helped me mature a lot.”
The maturing process continued Saturday after Richmond (9-9) flew to Amherst, Mass., to take on UMass in the Mullins Center. Wike played 36 minutes and contributed nine points and a team-high 11 rebounds to a 74-68 Atlantic 10 Conference victory.
“It’s still hard,” Wike said. “But it’s not as hard as last year.”