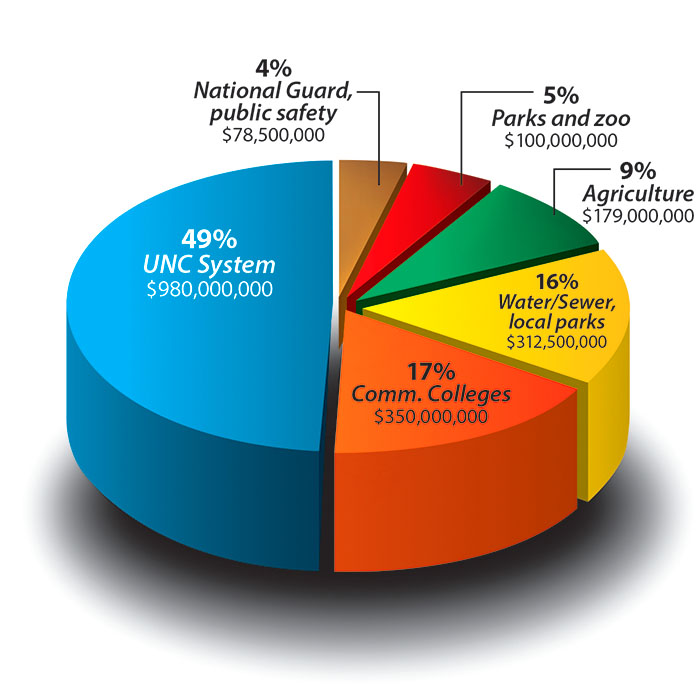 When voters head to the polls for North Carolina’s March 15 primary elections, they’ll be voicing an opinion on more than who the next elected leaders should be.

A $2 billion bond will also appear on North Carolina ballots. Mostly, the bond will pay for education-related improvements. The University of North Carolina System will receive $980 million — 49 percent of the total — and community colleges will get $350 million — about 17 percent.

Rowan County’s leaders, however, only have a lukewarm interest in the proposal. The infusion of cash Rowan receives could vary widely.

During the 2015 session, legislators representing Rowan voted, three to four, against the bond. State Sen. Tom McInnis, R-25, was the only legislator who voted in favor.

Rep. Carl Ford, R-76, this week said his opposition to the idea stems from shift away from transportation projects and $2 billion in debt associated with the bond.

When Gov. Pat McCrory first started pushing a multi-billion bond idea, it included road projects and infrastructure improvements such as $15 million for renovations at the N.C. Transportation Museum in Spencer. Now it’s mostly for new construction at colleges across the state.

Ford and other state legislators representing Rowan have said they’re not opposed to the heavy focus on colleges. However, money could be spent on education projects other than new buildings, Rowan’s state legislators say.

When he visited the N.C. Transportation museum last year, McCrory and state officials also focused on relatively low interest rates. A website set up specifically for the $2 billion bond also focuses on affordability. Ford said he dislikes the large debt because of economic uncertainty.

The minimum amount Rowan could receive is about $4.27 million, according to figures provided by Rowan-Cabarrus Community College. With $4.27 million, Rowan-Cabarrus is planning renovations to buildings 100, 200, 500 and 700 at the north campus. The college will also spend about $1.05 million to make a number of improvements to fire and emergency services training at the north campus.

In total, the college is set to receive $7.27 million for all of its facilities in Rowan and Cabarrus counties. Figures provided by the college show Rowan’s campus as receiving a majority share of the money.

Rowan could also receive a share of the $312.5 million that’s allocated for water and sewer projects. It would first have to apply for funding, which isn’t allocated to specific projects.

“We’re basically hoping it passes and hoping we get a scoop of water out of the bucket,” Pierce said.

County Commissioner Vice Chairman Jim Greene also mentioned the possibility that Rowan could receive water and sewer money, but said he was unsure exactly how much locals would see. Most money in the bond is allocated to specific projects. Water and sewer projects — Rowan’s major, current focus — doesn’t include designated projects.

If the bond passes, Rowan County would then apply to state government and compete against other projects across the state. Pierce pondered whether extensions of existing water and sewer systems might be prioritized higher than Rowan’s county-owned water and sewer project, which doesn’t currently exist.

Rowan County commissioners haven’t taken an official position on the $2 billion bond, but during Tuesday’s meeting are scheduled to officially endorse the idea of holding a public vote. Commissioners’ consent agenda includes a resolution that supports the fact that the bond appears on the March 15 primary ballot.