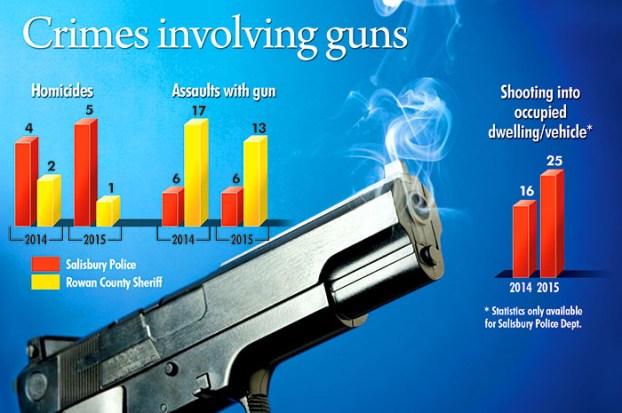 Gun violence: From problems to solutions

Six — that’s the number of shootings in September that triggered a partnership between the Salisbury Police and the Rowan County Sheriff’s Office. It was a solution that would maximize patrol efforts in the city, one that has resulted in fewer violent gun incidents in the city as the year came to a close.

Police officials also sought the public’s help in gathering answers to those violent crimes, some of which occurred within weeks of each other.

The Salisbury Post looked into shootings that occurred in 2014 and 2015 within the city and county and requested records from those respective law enforcement agencies. Those statistics compiled involved homicides where guns were used, shooting into occupied dwellings and assaults with guns.

The number of violent shootings in the city decreased at the close of 2015, based on the data compiled, while just a year before, the data reveals a higher number of shooting incidents from June to August.

Interim Police Chief Brian Stallings echoed earlier sentiments from Salisbury Police spokeswoman Shelia Lingle who had said that working with the sheriff’s office wasn’t any different than when officers work together during undercover drug operations.

Police have said those September shootings were the result of gang violence and the victims had connections or were associated with the shooters.

On Jan. 19, the body of Oscar Miguel Aguilera, 24, was found outside his Lakewood Apartment. He’d been shot to death. He’d walked home after a shift at DJ’s Restaurant. Less than three months later, 19-year-old Jayquan Kyon Hamilton was charged with the murder.

Miguel Angel Urrutia, 24, was found shot inside his car at the intersection of Hawkinstown and Old Mocksville roads on March 7; 18-year-old Steven Omari Rosario was shot and killed  inside a South Fulton Street apartment; Jonathan Pierre Dillard, 30, a local bartender was shot and left in a Park Avenue driveway; Nathan Pant was shot and killed Sept. 2 after an incident at a Rachel Lane home where two others were shot, but recovered from their injuries.

Stallings said he expects investigators to provide some closure in at least two of the above unresolved murder cases in the near future.

On Feb. 15, the Rowan County Sheriff’s Office began investigating a murder-suicide in China Grove, in which Steven Allen shot his wife Kimberly and then turned the gun on himself.

The Rowan County Sheriff’s Office also investigated two other murders, but officials have not said how either victim died. Angel Arias, a known member of the Latin Kings gang, was charged with the murder of Elisha Walker, a transgender woman. Investigators said Walker was found in a shallow grave in another county.

The decomposed body of James Michael Beam, 57, was found in an area of Bringle Ferry and River roads in mid-December. Jessie Gary Rhodes of Rockwell was charged with Beam’s murder.

Salisbury Police partnered with the Rowan County Sheriff’s Office to maximize their patrol efforts following a number of shootings in September.

“The hope was to identify potential suspects and or additional information that would help solve some of those cases,” said Sheriff Kevin Auten of the partnership.

He added that some arrests were made based on this partnership but most of those arrests were not related to any of the assaults leading up to this project.

Two people were injured Sept. 12 following a shooting at the corner of South Ellis and West Marsh streets. The victims, Daeshore Lyles and Keven Roseberry, were taken to the hospital. Police said they found bullet casings in the road and discovered vehicles in the area were struck by gunfire.

Police also responded Sept. 16 to a shooting reported at the corner of the 200 block of North Martin Luther King Jr. Avenue and East Liberty Street near Cannon Park. The next day, police responded to a Wilson Road shooting where a car with several people inside pulled up to the apartment complex and fired several shots. One of those shots struck Rashad Vinson in the groin.

On Sept. 18, Police responded to a drive-by shooting in the 500 block of West McCubbins Street where two men, Shakeil Roberson and Dequan Chawlk, both arrived at the hospital with gunshot wounds.
Two days after the McCubbins Street incident, police were called to the corner of East Lafayette Street and North Martin Luther King Jr. Avenue after a drive-by shooting was reported there. The victim told police someone in a black car drove up, yelled out of the window and fired one shot, striking his pinky finger.

In mid-September, police officer M.L. Dishman foiled a shooting that could’ve turned deadly. He sat in his patrol car at the corner of Martin Luther King, Jr. Avenue and East Liberty Street as a part of a patrol project. The project was a response to the increased number of shooting incidents, which had officers saturate certain areas of the city.

Demetrious Tyrone Lane shot at a woman and man who were walking and the officer was able to follow in his patrol vehicle. Lane crashed his car while trying to toss his handgun out of the window.

A resolution was brought to a shooting at the end of the year after witnesses provided authorities with details that helped in identifying a Charlotte man with a Dec. 25 shooting at a West Horah Street home.

At the close of 2015, there were no reported shootings in the city in October and only two each in November and December.

“Any violence, gun or otherwise in our community is of great concern and one murder is too many. Guns in the hands of the irresponsible of any race or age are clearly dangerous,” said Mayor Karen Alexander.
She went on to say “drive-by shootings or stray bullets have the same devastating results for either intended or unintended victims.”

Some in the community have been quick to condemn the police, but Alexander said it will take the community to stem the violence occurring in Salisbury and cities across the nation.

There was an average of three or more incidents during the summer months that involved shooting into an occupied property until it tapered off toward the end of the year. Despite the theory that the majority of the shooting incidents occurred in the West End, the statistics show only about half occurred in and around the West End community. Other areas where shootings occurred include Avalon Drive, Clancy, East Liberty and Crosby streets.

The Rowan County Sheriff’s Office investigated two homicides — July 13 involved a Woodleaf man, Destin Lamar Sloan, whom authorities said had been involved in a fight earlier in the day with neighbor Kerry Gray. Sloan shot Gray during a heated exchange.

Later in the same year, Sept. 6, Jennifer Merriman, 17, was killed during a domestic disturbance by her sister’s estranged husband, Montannez Moody. Moody also shot Merriman’s aunt, Bernice. He later went on a crime spree in two other counties and was found dead in a swampy area of a cocaine overdose.

Sheriff Auten said a lot of assaults his office sees involve people engaged in some type criminal activity that causes them to be a target for robberies and assaults that occur during the robbery.

He said there have been multiple cases where the victim refuses to cooperate and give any information about how they were shot or assaulted. He also said the younger criminals don’t seem to place any value on life.

“The consequences of a crime don’t figure in when individuals plan a robbery or an assault,” he said.

The opposite is true and some assaults do occur when the victim is random and doesn’t know the person committing the crime.

“We have a lot of violence on television, movies and video games, but real life doesn’t work like that where you just hit a button and start over. Murders are particularly sad because families on both sides of the crime are ripped apart forever,” Auten said.

Four murders in the city remain unsolved, police officials have said mostly because witnesses aren’t willing to come forward with information or to testify in court once the case proceeded further. On June 23, Shanta Lomax, 36, was found behind an East Lafayette Street apartment complex, shot multiple times. Police said at the time the shooting was not random.

Nearly a month later, July 3, Marquis Feamster was shot and killed. Feamster’s body was found lying in the yard of a home at 319 E. Fisher St., but police believe he was shot elsewhere.

There were two murders in October, and both victims — Aaron Phillip Vaughn and Antonio Chambers — were shot. Vaughn was found by his girlfriend while Chambers was killed in an apartment where others were present.

Recently, President Obama introduced strategies that would curb gun violence, including a focus on new background check requirements that lawmakers hope will enhance enforcement efforts of existing laws at the state level.

Mayor Alexander said she believes a focus on community policing, anti-gang and drug programs for at-risk citizens can help communities work together with law enforcement to reduce crime.

She suggests creating a system where any gun sold, whether through a personal or dealer situation, must be registered and the information entered into a database that would be shared by each state on a national database.

“If there is a system for selling cars across state borders, then why not guns?” Alexander asked.

Auten said he doesn’t believe the changes President Obama is proposing will make a big impact. He is however, in favor of legislation that will help protect citizens.

He recommends tougher state laws that would guarantee a mandatory active prison sentence for a felon being caught with a firearm.

“Any citizen caught with over an ounce of cocaine, over 10 pounds of marijuana or over four grams of heroin or opium is facing a mandatory active sentence even without a prior record of any type. So if a person already has a felony conviction and knows they cannot legally possess a firearm, why shouldn’t they face a mandatory active sentence if they are caught possessing a firearm?” Auten said.

“There are more and more folks that need treatment but there seems to be fewer and fewer options available,” he said.

By Amanda Raymond amanda.raymond@salisburypost.com The Salisbury community came out on a warm and sunny Saturday to watch the Dr. Martin... read more