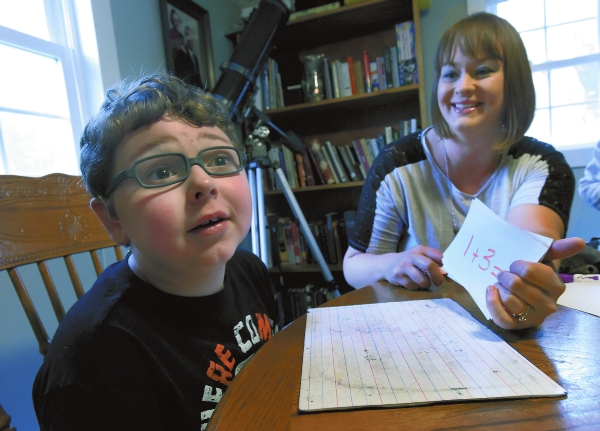 Riley Brilliant sits in his chair in his homeschool classroom that he calls ‘the office.’ His mother Michelle is working with him on his math addition problems. Wayne Hinshaw/For the Salisbury Post

I stood at the bedside of the tiny infant, whose head was swathed in bandages.

In my head, I had my doubts. In my heart, I wanted so badly for these words to be true.

“Can I tell you something? I want a high five! Mr. Wayne, are you ready for your biggest high five?”

“Guess what? I went to California when I was a little kid.”

“Momma, may I get down now? I’m done. Will you help me while I wash my hands?”

“Guess what? I had a jeep riding party for my birthday! I went to the Uwharries and picked out a jeep.”

“Mr. Wayne, what do you call that thing on your camera?”

These are the words of Riley Brilliant, that precious, precious baby. He turned 7 in December, and is now a long-term survivor of a stage 4 glioblastoma brain tumor. When doctors removed nearly half his brain, they told his parents, Michelle and Jason, he’d never walk or talk.

“I want to show you a picture of something in the office,” Riley says, and off photographer Wayne Hinshaw and I go to the office, which also serves as Riley and Lizzie’s homeschool room.

“I made this sign for the office,” says Lizzie, 8. Her neat lettering reads, “We use kind words. We share all toys.”

Michelle takes the cap off a marker and writes a simple sentence on the white board.

She points to the first word. Riley says “the.”

“What’s the next letter?” Michelle asks him.

I glance at Jason, who has a huge grin on his face. I nearly weep with joy, but keep on writing as Wayne snaps away.

Riley slowly works his way through the sentence.

Then he says, “The cat is fat as an ostrich!”

Lizzie writes a sentence for him, “Meg has a dog,” and he sounds that out, too.

“And I love the fact that Lizzie knows which words to write for him,” Michelle says.

Lizzie is reading at a seventh-grade level, and doing fourth-grade level math. She’s in third grade this year. Riley is doing work between kindergarten and first grade, his mom says.

“For school, we just do the level Lizzie needs,” Michelle says. “Lizzie gets bored easily, so we have A day and B day activities. We have math and English every day. Riley does the same thing every day. If he were in public school, he’d be in a special-needs secluded class. He loves people. I think that would be hard on him.”

“Last year was really frustrating for Riley,” Jason says. “It took a long time for things to get in his long-term memory. He is excited about learning, and he wants to learn. It is a very rare day when he just does not want to do it.”

Michelle has now gotten out a set of index cards. On them are written simple math equations.

“Isn’t that great?” Michelle asks, and it is.

Next, she gives him a piece of paper and a marker and asks him to write his name.

Taking the marker in his left hand, he gets to work.

First, of course, is the R.

“It’s kind of complicated,” Riley says, but then he writes quite a good “R.”

With every letter, he keeps up a steady conversation with his mom.

“Do it as best you can,” Michelle says.

He finally gets it, making a big swoop for its tail.

Riley and Lizzie head back to the living room, piling up on the couch to read a book he got for Christmas. It’s called “The Hug Machine.” The ladies at Rowan Public Library ordered a copy, they said, because it reminded them of Riley. The children, who visit the library about every two weeks, got their own copy for Christmas.

Lizzie starts reading and Riley joins in from time to time. The story is about a little boy who gives “unbelievable hugs.”

Like any sibling of a special-needs child, Lizzie has often felt left out. But she’s taking dance lessons, and hopes to add horseback riding soon.

Through federal funding, The Arc provides a helper, Anna Childers, for Riley 15 hours a week. The two of them have a list of in-home skill building goals they’re working on, including 45 minutes of exercise each day, three outings a week, walking up and down steps, answering “who, what, where, when and why” questions, practicing turn-taking.

While Anna works with Riley, Michelle and Lizzie can spend time together, riding bikes or walking or going on outings of their own.

Now Riley and Lizzie are playing tennis on the Wii. Riley loves sports of any kind, playing or watching.

“You ought to see him watch a football game,” Jason says. “He goes crazy when they score a touchdown. He loves the Panthers. He loves to see them score.”

The current score of the tennis game is 30-0, Lizzie’s favor.

“I’m doing a great job!” Riley says. “I almost made a touchdown!”

When he was 8 weeks old, Riley was diagnosed with a stage 4 brain tumor, which took up the front temporal and parietal lobes of the left side of his brain. These parts of the brain control motor movement, speech and memory, Michelle explains.

He will not walk or talk, doctors told Michelle and Jason before surgery to remove half his brain.

“But we didn’t have a choice,” she says.

After surgery, Riley went through 6 months of chemotherapy at St. Jude’s Children’s Hospital in Memphis, Tenn. He returned home for another 6 months of chemo, and  finished treatment in January 2010.

“We know of only a few other kids in the United States who are in this position,” Michelle says. “The effects of treatment and surgery are so varied, there’s really nobody to look to.”

He goes to a survivorship clinic once a year. With a St. Jude’s affiliate office now open at Hemby Children’s Hospital in Charlotte, the Brilliants will most likely go there instead of making the long trip to Memphis.

Riley has been released from occupational therapy and physical therapy, but still goes to speech therapy. He wears glasses and hearing aids, and short braces on both legs. He also wears a brace on his right hand. Because the tumor was on the left side of his brain, the right side of his body is weaker.

He sees a specialist in Chapel Hill because of his chemo-related hearing loss. He can’t hear noises in the higher frequencies, such as birds chirping or an alarm.

“We were happy to get to Riley’s first birthday,” Michelle says. “I don’t want to plan long-term, but we have to think of some sort of future.”

Michelle was trained as a chemist, but became a teacher through lateral entry. She worked part-time at Gray Stone Day School, and later full-time at Cabarrus Early College — but it was too much.

Riley still has three or four doctor’s appointments every month, not nearly as many as he had earlier in life.

“He’s done really well,” Michelle says. “He likes school. He loves to learn. He likes to make people happy. He wants to make me happy, because I’m teacher and mom, too. He reads people. We’ve been together so much that he can read me just by looking at my face.”

There are times when Riley tests Michelle’s patience. He tends to ask lots of questions.

“I tell him, ‘We’re not doing that question any more,’” Michelle says. “We do have time outs. A time out breaks his heart. He has had spankings. He knows how to obey. He does get a couple more chances on things because it may be a memory issue.”

And he’s an early riser, always waking up happy.

Which poses a slight problem. Riley knows his numbers, so Michelle put a digital clock in his room, and covered up the minutes. She doesn’t care about the minutes.

Riley loves a lot of things, including Jesus. He is working with his mother on memorizing Bible verses. He just memorized Matthew 19:14, and recites it with little prompting from Michelle.

“Let the little children come to me, and do not forbid them,” he says slowly, “for such is the kingdom of heaven.”

“What did you do when you were little?” Michelle asks Riley.

“I saw Jesus and Joseph,” Riley says, “and they kissed me!”

Since Riley’s change in status to long-term survivor, he’s seen his oncologist at St. Jude’s, Dr. Alberto Broniscer. He’s from Brazil, Michelle says. “It’s a good thing when they leave their doctors.”

“You are a gorgeous boy!” Dr. Broniscer told Riley the last time he saw him.