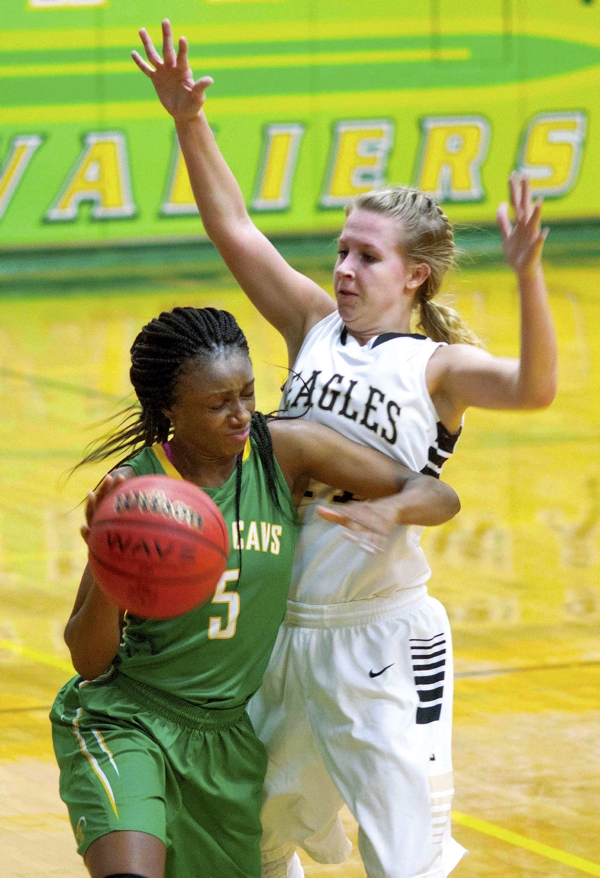 SPENCER — East Davidson’s Kendall Simmons drove hard for a three-point play despite the combined defensive efforts of North Rowan’s Special Washington, who tried to block the layup, and Tre Allen, who gently pushed Simmons from behind.
Simmons’ hard-nosed play meant an 11-point lead for East Davidson with 2:50 left to play, and everyone in an electric North gym knew a serious ballgame was decided.
That included East Davidson coach Don Corry. A veteran of decades of roundball excitement, he fist-punched the air like a teenager as Simmons’ shot dropped through the net.
East Davidson, unbeaten and ranked second in 2A, withstood a parade of punches from a faster North team for three quarters, and then dominated the fourth quarter to win, 66-52.
The victory put East Davidson alone in first place in the Central Carolina Conference.
“We knew coming to play North in their gym that this was going to be the test,” Corry said. “They knew they had a chance. We knew we’d have to take their best shot. We were going to have to be resilient, and I thought our girls were.”
North (10-5, 2-1 CCC) got off to a torrid start behind jumping jacks Aliyah Farmer and Brianna White and led, 11-5.
“We jumped on them pretty good, but we weren’t able to build a lead because of turnovers,” North coach Brian Lytton said. “We just turned it over the entire game. Turnovers, turnovers, turnovers. That was the story.”
It was at least part of the story. Another part was East Davidson’s 3-point shooting. The Golden Eagles made eight of their shots from behind the arc.
By the end of the first quarter, Brooke Anders had knocked down two long ones, and East Davidson led, 18-15.
“We weren’t getting back on defense at the start of the game,” said East Davidson guard Madi Hallman, a Catawba College signee. “But then we regained our composure. We started making our layups and then our 3-2 zone defense slowed them down some.”
Bailey Grimsley made two 3-pointers for East Davidson (16-0, 3-0) in the second quarter, but Washington heated up for the Cavaliers. The senior guard had 11 points in the quarter. East Davidson took a 32-31 lead to the break.
Corry’s concern at halftime was Hallman’s three personal fouls. Hallman makes big shots, handles the ball and drives and kicks to the 3-point shooters. Had she gotten her fourth early in the second half, a lot would have changed.
The teams look spent in the third quarter. Both scored in single digits.
East Davidson shot-blocker Bayley Plummer, a 6-2 McDonald’s All-American nominee headed to Appalachian State, rejected shot after shot in the paint by the Cavaliers. After three quarters, East Davidson led, 41-39.
When Washington made a long 3-pointer to begin the fourth quarter, North led for the final time at 42-41. But North kept turning it over, and East Davidson capitalized with eight quick points. Hallman made the clutch 3-pointer that put the Golden Eagles back on top. Then Hallman made a tough, driving shot. Then Simmons buried a 3-pointer.
“North had us rushing some things, going a little faster than we wanted to go,” Corry said. “I told the girls to relax, to take a deep breath, and then we played really good basketball for about three minutes to get a lead.”
Simmons’ huge three-point play was the dagger. After that, it was just a matter of using the clock and knocking down free throws, and East Davidson does that as well as anyone. Hallman, Simmons and Plummer converted 15 free throws in the fourth quarter. East Davidson led by 18 points late in the game before reserves Tanajah Robinson and Payton Russell scored for the Cavaliers.
“A lot of our game plan worked,” said Lytton, after the Cavaliers limited Plummer to two field goals and 11 points. “If we could have gotten a lead, we would have made them come out of that zone and play us, but turnovers kept us from getting a lead. We played very hard. We just didn’t play smart.”
East Davidson matched North’s intensity, took care of the ball, and relied on Plummer to eliminate layups on the defensive end. She had a dozen blocks.
“I know it seems like Hallman and Plummer have been around forever,” Corry said. “No one in the CCC is going to be sad to see them graduate — except me.”