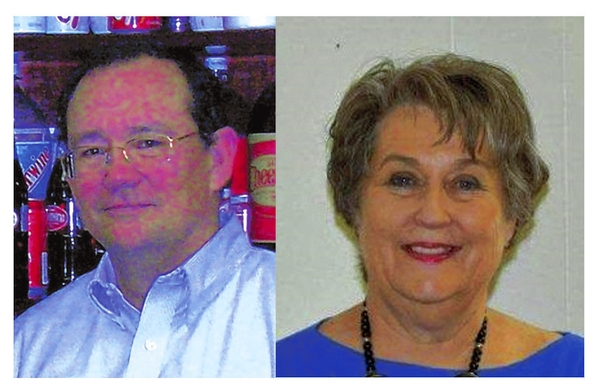 The pride of Lions gathered together in the banquet room at Trinity Oaks on Tuesday night at 6:30 p.m.

The banquet committee did an outstanding job of decorating the hall, with centerpieces contributed by Jerry and Geneva Austin, and there was a social time before the meal to enjoy snacks and conversation.

As keynote speaker Terry Osborne remarked, “Looking over this group, it’s like a Who’s Who list of Salisbury’s finest.”

As usual, the meeting began with the Pledge of Allegiance as a reminder of our good fortune to live in this country, followed by Lion George Ohm’s invocation. A fine meal was served up by the staff at Trinity Oaks. Lion Ohm returned to the podium to greet and recognize the past recipients of the Person/ Lion of the year award. There were many past winners in attendance, several having received the award more than once.

Guest speaker Terry Osborne, Rowan ABC General Manager, enlightened the crowd with insight into the processes and inner workings of the ABC board and how that entity serves and benefits Rowan County.

Chairman of the banquet committee Lion Lori Swaim made the first presentation, the 73rd Salisbury Lions Club Lion of the Year.

This person is chosen based on their outstanding dedication to the club and the mission of being champions for the vision and hearing impaired. Much of the work involves fundraising to support eye testing, assistance with vision treatments and support of Camp Dogwood, the recreational facility on Lake Norman for adults with blindness and visual impairment. The award went to Lion Alice Edwards, former president of the club and tireless advocate for the blind.

It was then Lion Alice’s turn to be the presenter of the 73rd Person of the Year award. The Salisbury Lions Club and the committee spend a great deal of time looking for a person who demonstrates the spirit of Lionisum as demonstrated by the motto “We Serve.”

This year’s recipient was Cliff Ritchie, president of Cheerwine. Mr. Ritchie and Cheerwine have demonstrated the highest standards in community support. Their support for local events and generosity is unparalleled.

An emotional Ritchie accepted the award and expressed his thankfulness that Cheerwine was able to be of such support to such a wonderful place as Salisbury and Rowan.

The Salisbury Lions Club meets on Wednesdays at noon at Ryan’s on Jake Alexander Blvd. Come and see what they’re up to.

AARP is a national nonprofit, non-partisan membership organization the helps people who are 50-plus have independence, choice and control in way that are beneficial and affordable to them and society as a whole.

Rowan County residents 50 years and older are invited to join and do not have to be retired to join. Annual dues for the chapter are $3. Chapter meetings are first Thursdays at Rufty-Holmes Senior Center, 1120 S. Martin Luther King Jr. Ave. at 1 p.m. Four times a year the chapter has a covered dish meal prior to the meeting, beginning at 12:30 p.m.

The next meeting is Thursday, Feb. 4, at 1 p.m. with speaker Frances Weant, fitness director at Rufty-Holmesr. Refreshments will follow the meeting.

The North Carolina Symphony with Grant Llewellyn, conductor, will perform on Saturday, Feb. 6, at 7:30 p.m. in Keppel Auditorium at Catawba College.

The evening will feature “Hiraeth,” a brand new composition by Sarah Kirkland Snider, based, in part, on memories of

Salisbury, as well as music by Bernstein and Smetana and more.

For tickets and other information,, visit http://www.salisburysymphony.org/calendar