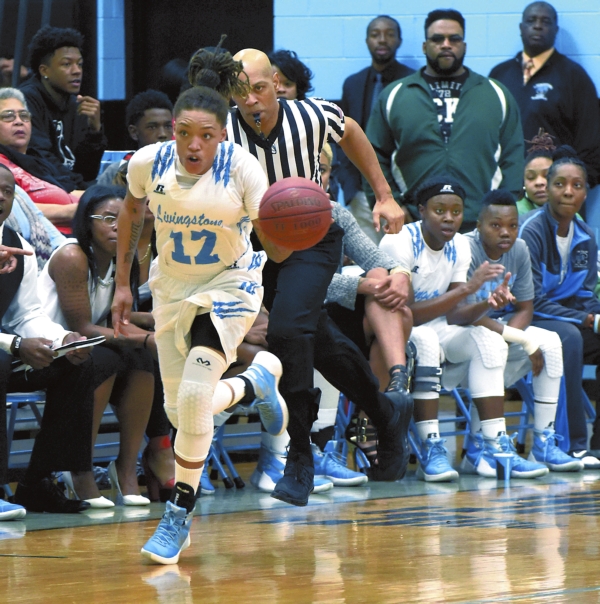 SALISBURY — A month from now, when the Livingstone women’s basketball team is jockeying for a better seed in the approaching CIAA tournament, it will remember this game as one that got away.

“We gave them the ball 23 times (on turnovers) and they scored 22 points from the free throw line,” coach Anita Howard said after Livingstone (8-7, 3-3) suffered its third straight loss. “We kind of helped ourselves beat ourselves.”

It was a setback that will probably leave a mark. LC out-rebounded Shaw, 51-39, and led, 55-44, after senior center Wende Foster completed a three-point play with 2:41 remaining in the third period. “All we had to do,” said Howard, “was play smart and finish them off.”

Instead the Blue Bears lost their traction and stumbled across the finish line.

“That’s a big win, especially on the road,” winning coach Jacques Curtis said after Shaw (13-5, 5-1) gained its third straight victory. “Livingstone is a tough team in this gym — and their fans make it tougher. At the end, our girls just executed better than they did.”

At the beginning, it had all the makings of an upset-to-be. Brittany Taylor’s 3-pointer from the left side and two Toxiana Wilson free throws gave Livingstone its first 11-point advantage, 20-9, late in the first quarter. And when the 6-foot-5 Foster scored on a turn-around jumper from inside the lane with 1:42 left in the half, it was 35-27 Blue Bears.

“I do think we let this game get away from us,” said Howard, who sequestered her team in the locker room for 20 minutes after the final horn. “But it’s also a lesson learned. We’ve got to be able to get a lead, maintain a lead and play with a lead.”

A key turnover came with 43.2 seconds to go when Lovette was called for a five-second inbounds play violation. There was also some late-game confusion when the clocked stopped working for several seconds and later, when the Blue Bears seemingly had six players checked in at the same time.

“Sometimes you feel like you’re stealing one,” Curtis said. “It is so tough to win on the road in this league.”

NOTES: Livingstone, the CIAA’s best offensive rebounding team, had 21 offensive rebounds. … Taylor made four of six three-point attempts and scored 13 points. … Shaw was paced by senior Kaula Jacks, who shot 9-for-14 from the field and netted a game-high 24 points.